The remarkable renaissance of Richard Comely’s  Captain Canuck this year has prompted me to look at the history of this noble surname in our comics. John Adcock in his informative blog on Canadian illustrators and cartoons had a great entry on the early creation and appearance of the character called “Johnny (Jack) Canuck.” He was a personification of our national identity much in the same way that America had “Uncle Sam” and Britain “John Bull,” who started to be depicted in political cartoons just a couple of years (1869) after Confederation. Like all national personifications he is an hyperbole, let’s say like a lumberjack riding a Timmie’s donut inner tube down the rapids a river of maple syrup and using a hockey stick for a rudder.

In Dime Comics No. 1 (Feb. 1942) Leo Bachle brought this archetypical national icon into the 20th century onto the back drop of the Second World War. His rank, we find out in Dime Comics No. 8, is captain probably in the R.C.A.F. though he doesn’t seem to be specifically associated with it and seems to be more of an independent operator of some sort or an agent of a mysterious arm of the Canadian military.

Over at Maple Leaf Publications we had Sgt. Canuck who appears as early as Bing Bang Comics No. 2 (I don’t have access to a copy of Bing Bang Comics No. 1 but I suspect that would have been his first appearance) and seems to have been created by an H. Ward (I can’t properly make out the artist’s name from the scan of the splash that I have) and was written and drawn by Spike Brown in later issues. Sgt. Canuck was a member of the Vancouver Police Force who solved murders and other criminal activities. So this square-jawed, blond policeman was in Bing Bang Comics from the beginning and since he also appears in one of the last issues (Bing Bang Comics Vol. 3 No. 29, June-July 1946) seems to have lasted up to the end of the WECA period.

The last of Canuck contingent from the WECA period, though created during this period, was not published until 1975 in Captain Canuck Comics No. 3. His name was Canuck Kid and he was created by Edward Letkeman. Letkeman did do two stories featuring his creation Flame Berns for Bell and Commando Comics in issues 14 and 15 and he was the main force behind Space Nomads Comics and Zor The Mighty Comics issued in 1946 by Century Publications, a subdivision of Superior Publications. The Canuck Kid was a pre-teen boy who gets transported, along with his dog, by Father Time in the early Canadian past and the time of the arrival of the first European explorers.

When we asked Richard Comely about this he quickly sent back this initial answer:

“This is 37 years so my memory is a bit vague. There may be a letter from him in an old box of files I have in storage. The cartoonist E. Letkeman contacted me and sent me the art. He was an older man then and I doubt still alive. He was living in BC at the time. That’s about all I can recall. I returned the art to him after we made the negs from it.”

In a way, Richard’s publication of these two previously unpublished pages closes the circle that begins with Dime Comics No. 1 and extends into the mid-seventies with Captain Canuck Comics. 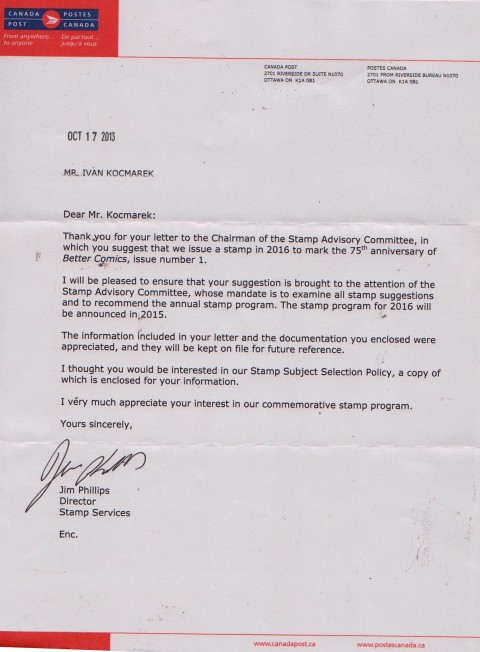 I also want to mention that I have received an initial response to the request to Canada Post to issue a series of stamps in 2016 that would commemorate 75th anniversary of the  publication of Canada’s first comic book, Better Comics No. 1 in March of 1946. Here is the reply above.