Some of the most interesting Lazare creations are the orphan “left-overs,” those stories that were one-shot “try-outs” or “fillers” and there were eight of these. The first three were in consecutive issues of Triumph Comics Nos. 20-22 which is a Bell title for which Lazare never did a feature character.

All three were four pagers with the earliest, “Charge of the Cossacks,” appearing in Triumph Comics 20 (June/July 1944) where a group of the traditional Russian warriors come to the rescue of a village taken over by the Nazis. 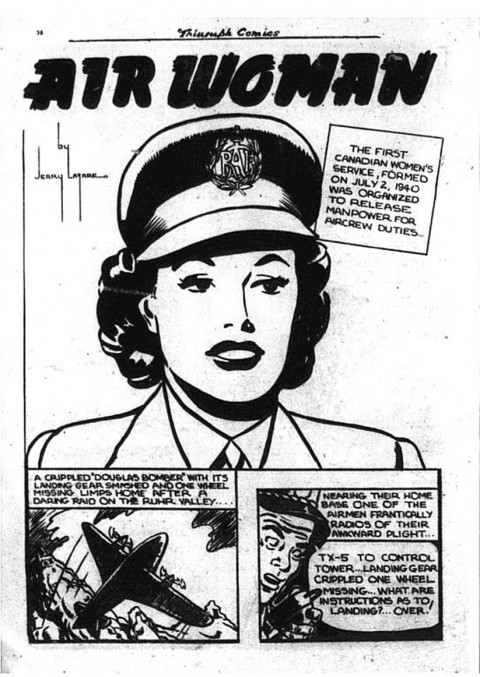 The second, “Air Woman” was in the next issue, No. 21 (Aug. /Sept 1944), and displays one of Lazare’s best known splash pages. The short piece is about Sally Dunlop, a young woman enlisted in the Canadian Women’s Service of the R.C.A.F. and how she manages to radio down a “crippled ‘Douglas Bomber’”  and rescue the two pilots from the crash landing.

The last is called “Race for Life,” in No. 22 (Oct./Nov. 1944), is about an Allied army mascot dog named “Zip” who is sent to deliver a much-needed gun sight to an under siege emplacement somewhere in Italy. These creations really show off the talent of a teenage Lazare who is able to visualize and set down solid 4 page gems, each which could easily have been built up into a quality serialized feature.

Jerry Lazare did two of these rogue stories for Commando Comics. In Commando Comics 15 (Jan./Feb 1945) he put together a circus story called “Circus Cyclone (or the Muddled Mud Opera)” and unabashedly admits in the by line that it has been “wisely written and intimately illustrated” by Jerry Lazare. The story stars Barker Baker who was the voice of the side shows. With the help of the circus lion,  Baker foils a plot by rival circus owner Sam Slick to embed a pickpocket in Baker’s circus crown and land their owners in jail. To me this stands as one of Lazare’s best illustrated stories and shows the progression he had made in the short two years he had been at Bell up to that time.

Just over a year later another self-contained stories shows up in the final issue of Commando Comics, No. 22 (March/April  1946) shows up, but this time I think it’s writing premise that stands out.  The six page story is called “Danny and the Ghost” explains how a ghost (a member of the ghoul union) is assigned to haunt Danny, the young son of tycoon Grandroost, at their country mansion and in doing so saves old man Grandroost and Danny himself from a murderous plot to claim the Grandroost fortune by the hired help.

In Joke Comics 26 (June/July) Lazare produced his only science fiction story called “Scott Stewart, Planet Pilot” which jumped into the world of 2054 and the task of an interplanetary pilot to transport Ambassador Fung to Pluto but after some sabotage his rocket is forced down on a comet populated by Amazons and lead by a rogue female earth scientist whose hatched a plot to set off a planet ending atomic chain reaction on earth… whew!! Scott foils the plot and, with the comet exploding in the background heads off for Pluto.

Two more of these one-off stories appeared in Dime Comics. Issue 22 (Aug./Sept. 1945) contained Lazare’s “Firebug’s Fiasco” about a detective called Dew West who solves a firebug’s crime in six pages and then after another year in the very last non-reprint issue of Dime Comics, No. 28 (Aug./Sept. 1946) he put is a story called “This’ll Kill You” subtitled “An Eric Morgue Story,” and you can see that Lazare was really having fun by this time–all tongue-in-cheek, Dashiell Hammett in a nut shell of six pages about a purloined diamond.

Whether these stories were designed as “fillers”  or possible try-outs for serialized features, they are a wonderful, stand-out collection of Gerald Lazare’s youthful creative energy unbound by the weight of being feature stories. I think that they are representative of some of his most creative writing and best illustration for these war-time Canadian comics.