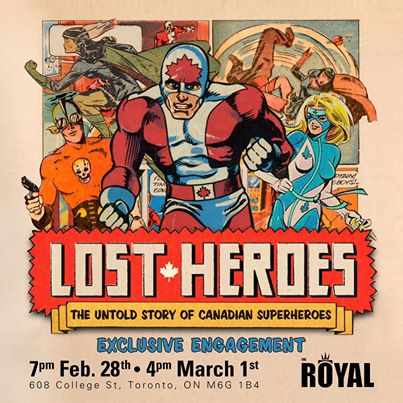 On a bitterly cold Friday, last day of February afternoon, the Hamilton contingent (Walter, Scott, Marty, and I) set out from the Big B parking lot in Walt’s van for Hogtown. The ride along the QEW gave us a great chance just to discuss and spar over comics for almost an hour with nothing to interrupt us. Before the premiere we grabbed a bite of supper at The Lakeview Restaurant where, coincidentally, Richard Comely was doing a small signing. It’s a great unpretentious diner of a place and even has a Captain Canuck burger on its menu, a menu which is also graced with the good Captain’s likeness himself.

After our quick supper on Dundas we went up to College and The Royal Theatre which is a great old rep theatre just a block from the Comic Book Lounge and the perfect choice for the premiere of a movie like the Lost Heroes documentary. It has a great art deco interior in keeping with the early subject matter of the movie.

About 200 people were in the audience when the lights went down and the anticipation level went up. The movie seemed a little long, almost two hours but it got a good round of applause when it finished and then Director Will Pascoe took a few questions.

Overall the documentary was a slick and informative effort. It reminded me a little of the recent PBS Superheroes three-parter because it made heavy use of talking heads in front of green screen projections. This allowed the film itself to take on a sense of comic book levity and healthy self-deprecation. A comic book doc has to be heavy on graphics from the books themselves and this one didn’t let us down in that respect.

The first section was on the Canadian Whites and had a great scene setting montage of clips that put the whites in their WW2 context. This section seemed to me to be about a half-hour long and could have done with more detail and filling out. The best portion of this was the bantering between Jack Tremblay (artist/creator of Crash Carson in Wow Comics) and his artist son Rick Trembles.

From this segment the documentary jumped to 1975 and the creation of Captain Canuck to set out the template for the failed Canadian national comic book hero who tries to play with the big boys south of the border. Then, in stepping stone fashion it showed how this template and pattern has been repeated over the past few decades by first jumping back to 1974 and The Northern Light in Orb Magazine and then ahead to Northguard/Fluer de Lys in the mid-eighties and John Byrne’s Alpha Flight at the end of that decade and others.

The film goes on to point out that the only identifiably Canadian superhero to make it Stateside has been Wolverine and he is only nominally Canadian, that is by the slenderest thread of being born/created in a fictional Canada (a Canadian citizen), though in  every other way his birth and creation is American.

To my mind this second, longer half of the film is too repetitive and could have been made more economical with some summary phrasing after the initial template of Captain Canuck and Northguard had been established. I may be expressing my bias here, but this would have left added time for a more in depth look at the whites.

It is also too bad that it was never made clear how culturally and historically dissimilar these two periods were (the time of the Whites and the time of Canadian comics from the seventies on). The WECA period of the Whites far more strongly bonded to Britain and British culture. Not a single hero wore the maple leaf because our national flag at the time was the Union Jack, if anything, the Union Jack appeared as the emblem on the chests of some of these heroes. The attempt of their creators was to fit these heroes into the war reality of the time and that’s how they gained their Canadian brand not by trying to be American or successful in the American market. The Golden Age hadn’t developed much of a back story yet. It was only a few years old and these Canadian heroes were fitting into a very formative period of comic book history in general.

By the mid-seventies and the time of Captain Canuck, we’d gained a national flag (1965) and a formal national emblem in the red maple leaf on a white field; we’d shown the world who we were at Expo ‘67’; perhaps most importantly we’d gone through the Summit Series with the Soviets (1972) and watched the new emblem score that final goal with 34 seconds left. This galvanized our Canadian-ness in a way that was not yet present at the time of the Whites. This is the mileux that produced Captain Canuck and I think that it has little connection to the heroes of the Whites. Richard Comely has said to me that he had never heard of the Whites when he created Captain Canuck.

The heroes of Lost Heroes are ‘lost’ in a double sense, and this is made clear in the movie. First the heroes of the Whites are ‘lost’ (especially the WECA heroes) in the sense that they have fallen off our cultural radar and exist somewhere along the points of its horizon. The Canadian super heroes of the seventies and beyond may be lost in this way, but not anywhere near to the same extent. These later heroes are lost in the sense that they repeatedly fail in establishing a Canadian presence original and resilient enough to butt against the border bellow and finally break through or at least find enough national self-presence to know that they don’t need to break through.

Ultimately, Lost Heroes has the final appearance of a more than competent and very energetic documentary on Canadian comics made by young people who fall just short in the final understanding and appreciation of the full back story of the medium resulting in some misplaced emphasis in the telling. Will Pascoe, great job that he did, would have benefited from showing a rough early cut to a group of knowledgeable seasoned Canadian comic book people for informed criticism that would have helped the final product. But this is just my own personal throwaway bias.

However, I don’t want to discount the fact that Lost Heroes is an excellent documentary and I thoroughly enjoyed it. It’s informative, well-crafted, and worth seeing (and I urge people to see it when it shows up on Superchannel this month) and it’s worth getting it slabbed as valuable addition to your comic history collection, but ultimately it’s the under copy to the documentary that needs to be made on the relation of the heroes of the Canadian Whites, contemporary Canadian superheroes and their connection to our national Canadian identity.