Previously in the series: Cary Nord

I met with Ramon Perez at the Drake Hotel for a time-honoured Toronto tradition, brunch. After ordering and watching Ramon be very charming toward our adorable curly-haired waitress, we got down to business and started chatting about Ramon’s career. 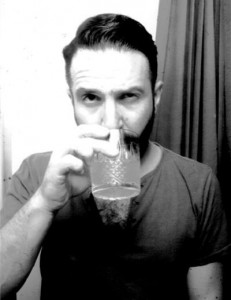 Ramon has worked for some major comic publishers in the past like Marvel, DC, Dark Horse, Boom and Archaia. Even some big names outside of comics like Hasbro, Wizards of the Coast, and Clorox. But, what Ramon is best known for is his work on Tale of Sand by creator Jim Henson. Ramon even won an Eisner in 2012 for Best Penciler/Inker for his work on Tale of Sand. “It was one of my proudest projects.” Ramon told me “people have plateaus in their career, different projects in their career that they can pinpoint that pushes them to next level…Tale of Sand was definitely one of those.”

When I asked Ramon what he was currently working on, he spoke about his work on a book from Archaia called Rodchester, a modern day reinterpretation of Jane Eyre set in New York. He also mentioned a big project that would be starting this year, a project launching with Marvel around mid-summer, which “I can’t tell you much more about because it hasn’t been announced.” The very next day after we met, Twitter went crazy because it was let out that Ramon would be drawing Spider-Man Year One: Learning to Crawl with Dan Slott.

Ramon is also returning to his web comic. When I asked why he wanted to get back into them he said, “It’s my own voice, and I have creative control, it’s my characters. I feel like the story arch has been left unfinished. A lot of people have shown interest in reading the end of the story. I have a lot of interest in finishing the end of the story, so better late than never.” Ramon’s web comic is called KuKuBuri www.kukuburi.com

So, now we know where Ramon is going in the near future, what I really wanted to know is how he got to where he is now. Ramon has been a freelance artist for close to 19 years, but his first job in comics was around 9 years ago. “I always knew I wanted to do something with art,” he stated. When Ramon was looking to go to college, he was interested in architecture, interior design, fashion, anything he could draw in. Through the help of friends he came across animation, which then lead him to illustration, “a course which was a very good starting point, a foundation for what I wanted to do. So, I did that [at Sheridan College.] People would tell me, you should be working in this or that, you should be working in Sci-Fi, and then someone said, ‘You should work in comics.’” Ramon has read comics since he was in elementary school, he just never thought of it as a career. “I was never like, ‘that is what I want to do’, I just thought it was something you buy, that was there. There was a disconnect in my brain that someone actually had to do them.”

Comics didn’t want Ramon right out of school so he moved into fantasy and sci-fi illustration. His first job out of college was for a food service magazine where he did an acrylic paint illustration of “a big fat chef balancing food on scales,” he chuckled. “Then I did an illustration for a place called Palladium Books (www.palladiumbooks.com/‎) for a role playing game.” He continued, “It really catapulted the beginning of my career. I worked pretty solidly for them for about 5 years. Just doing mass amounts of work.” They even let him write and draw his first graphic novel called Machinations of Doom. After Palladium he started getting more work in the industry with bigger and bigger clients.

In the future Ramon is looking to become more of an author, creating his own works, focusing on his own creations. He also mentioned that he would like to get into film. “I would love to do design for film, or even directing.”

Bonus Question Time: “What are some jobs you had before getting into comics?”

Ramon answered, “I worked at a Gas Station Car Wash combo. First I was at the car wash, then got promoted to the gas station.” He also did some plumbing, roofing and demolition. He briefly worked at a comic book store, but by far my favourite job he said he had was a  pizza chef, “I quit after a while because they wouldn’t let me flip the pizzas in the air. I could get them the perfect size every time when I did that.”

Next in the series: Marcus To