I recently came across a very interesting study about women comic book readers. It was done by a comics blogger named Brett Schenker, who looked at the number of Facebook “likes” of comic book related terms. Schenker looked at the demographic breakdowns of these Facebook likes and it showed that 40% of these likes came from women. This is only one study and it is somewhat skewed because Facebook is generally used by more women than men. However, this could also indicate a broader change going on in the comic book industry, namely greater participation by women in the comic book industry.

For me, this forty percent figure exaggerates the actual percentage of women comic book readers. My own experiences from attending Comic Cons and comic book stores in Vancouver would put the figure more at about twenty percent of comic book readers being women. The comic book industry is still largely dominated by men. Most of the well-known and most popular superheroes are male. Collectors routinely undervalue comics featuring female characters. Consider that the Overstreet Price Guide pegs near mint minus copies of Superman’s first appearance issue (Action #1) at $1.9 Million, Batman’s first appearance issue (Detective Comics #27) at $1.5 Million, and Wonder Woman’s debut issue (All Star Comics #8) checks in at a measly $90,000. Throughout the Golden and Silver Ages of comics, female characters played minor roles in the burgeoning comic book industry. The women were present during these early periods in comics, but the recognition would come very slowly.

I believe that greater participation by women in comics really started happening during the Bronze Age of comics (1970 to 1985), and this progresses in fits and starts into the Modern Age of comics. During the 1970s and 1980s, more and more female comic characters and women writers came onto the scene, and they became more interesting and more prominent than ever before. 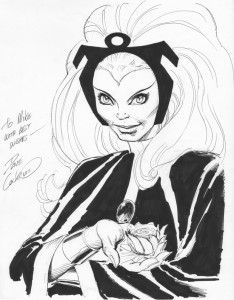 As a male reader, the first female character that grabbed my attention was the X-man (ahem) Storm, who first appeared in Giant-Size X-men #1, smack dab in the middle of the Bronze Age. I love Storm’s incredible back-story of being an African weather “goddess”, orphan, and one-time thief in the streets of Cairo. Storm also went through interesting changes: she started out as a wide-eyed newcomer to America, progressed to become the leader of the X-Men, and later became punk haired and de-powered.

Actually throughout the seventies, eighties and nineties, the X-Men comics and animated series introduced incredibly interesting female characters. Besides the introduction of Storm, Jean Grey became the all-powerful Phoenix entity. A woman has made it to the pinnacle of comic book success when she has become the most powerful cosmic entity in the universe, right? After Jean/Phoenix, I read and watched X-men stories that introduced me to other awesome superheroines such as Rogue, Kitty Pryde, and Jubilee. The X-Men and related titles also featured great writing and editing by women writers such as Ann Nocenti and Louise Simonson.

Over at DC Comics, I noticed that writers such as Mindy Newell and Gail Simone have done great jobs in raising the profile of female characters. In the past decade, Gail Simone, in particular, has elevated the status of characters such as Wonder Woman, the members of the Birds of Prey, and controversially, Batgirl. While DC has transformed these characters into icons of female empowerment, it has also been accused of taking a step back when some readers noticed that only one percent of its “New 52” creative staff were women.

Just recently, Marvel Comics has revitalized the character Carol Danvers/Ms. Marvel. The writer Kelly Sue Deconnick renamed her Captain Marvel, and in the process gave her more depth and greater powers. I like the sound of “Captain Marvel” because it really elevates Carol Danvers and makes her on par with the big boys in the field. It sounds powerful, like Captain America.

I’ve done a quick survey her of the female superheroes and writers that I know. There are many others that I haven’t mentioned because I haven’t read their works and I haven’t even touched on the good things that male writers and male superheroes have done to advance the status of women in comics.

I also see more female writers than female artists out there, but maybe I’ve just read titles that have more female writers than female artists. Just recently, I read some issues of Saga and I really enjoyed the artwork of Fiona Staples, but I haven’t really found other comics drawn by women. As you probably know, more work needs to be done to advance the status of women in comics. When most of the famous comic book characters are muscular, white, and male, we need to approach the genre from other angles.