Oh look, a beloved comic book character is being killed off, surprise surprise…

On April 25th Entertainment Weekly confirmed that they will be killing off Wolverine this coming September. Prepare yourselves as  the book has been described as “grisly” by writer Charles Soule as well as “downright ugly.” If you read the Wolverine comics you may have seen this one coming. I say this because Wolverine has recently been stripped of his powers in vol 5 of the comic Wolverine. His death will be featured in a month-long four-issue series called Death of Wolverine that will be written by Charles Soule and the art will be by Steve McNiven.

I am sure there are a lot of new comic readers, or Wolverine fans who haven’t read comics in the past that are losing it right now. They are probably wondering how they could kill off such a beloved and popular character. Then there are the others, the ones like me who have lived through the countless deaths of at least one of our favourite and most loved comic characters. Do you know what us veteran comic readers have learned from all the heartbreak throughout the years…it’s to be cynical. Ok, ok, maybe not all of us, but we have learned that in comics no one stays dead for long.

I understand why characters are killed in comics. After a character defeats their arch-nemesis and lives through armies of villains there isn’t much invested in watching them fight. They will live through everything so why keep reading? Killing a character can help move stories along, especially if there are other main characters involved. And, of course there is always the sales that come with killing off a character. Whenever a major character dies in comics the sales tend to jump, sometimes even skyrocket, so why not kill a character after he has had a good run and his sales dip a little.

I think the most shocking thing about Marvel killing Wolverine is that he is in so many books right now. He seems to be on almost every team the Marvel Universe has. His death isn’t just affecting one series of books but many. 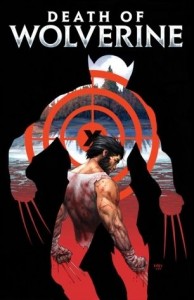 When I heard this news I was a little surprised, I think mostly because he is one of my favourite superhero characters, but that was only for a brief moment until my logic kicked in and told me that I know he won’t stay dead for long. So, let me ask you new comic readers something, are you shocked and thrilled by the announcement of comic book characters dying? Do you plan on purchasing the Death of Wolverine Comics, or would you purchase a series if it contained the death of your favourite character?

For you veteran comic readers, are you going to pick up this series, or like me have you become cynical and assume Wolverine will pop back up in comics in the next year or so?

Let me know what you think in the comments section below.