The Man behind the Mask

We continue with Caps Artist Alley and another new creative team and a new arc. This time we have Jazzy John Romita as our artist with inking chores being taken on by Sal Buscema.  This is mostly a one-shot for Romita, who is of course famous for his work on our friendly neighbourhood Spider-Man. He was getting a little help from Big John Buscema over on that title at this time, so Stan Lee must have made him pull double duty and draw this Cap issue. Lucky us! Sal Buscema this issues inker is John Buscema’s younger brother.

Our story begins with Steve Rogers walking toward the Avengers mansion. He pauses outside and does not go in, deciding instead that he needed to work on forging his new identity without Avenger help. The Black Panther spots Steve and comments to Goliath that he will come to the Avengers when he is ready to do so.

Next stop is the barber shop. No ordinary barbershop, this shop is a front for SHIELD and Cap is on his way to hopefully run into his sometimes girlfriend Sharon Carter Agent 13. We quickly find out she is on dangerous mission involving A.I.M. and alone. Cap joins her in her fight and together they dispatch the threat. Cap does not think this life is made for a woman and asks Sharon to leave SHIELD so she would have time to pursue a “normal” life with him. She flatly refuses and that’s that. Cap leaves dejected (he handles rejection about as well as Rick Jones) and begins working on his new identity. He tries to find a room but without any identification this proves difficult. He finally finds a dive and crashes in the bed. All of sudden the room begins to move strangely and distort and an image of the Red Skull appears. He has somehow managed to get his hands on the cosmic cube again and we know things are about to go from bad to worse – next issue. 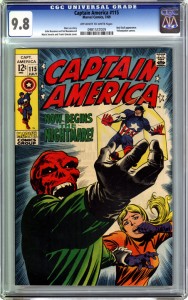 The Red Skull has the Cosmic Cube and he begins to toy with our avenger. Before he really goes to work, the Skull tells cap how he came into possession of the cube again. The short of this being The Red Skull Exiles retrieved the cube for the Skull from a remote Mediterranean island. The Red Skull does not share the power of the cube with his Exiles, instead he tortures them and sends them to a remote island of there own.

We switch scenes to Rick Jones who is searching for Cap at SHIELD and Avengers HQ with no success. He presses the old Teen Brigade into service in the search, all the while wondering if Captain America has abandoned him.

The Red Skull continues to use the Cosmic Cube to torture Captain America on many levels. Finally he uses the cube to probe Caps mind looking for someone important to him. Up pops Sharon Carter. The Skull brings Ms. Carter to Cap’s new apartment (a scary enough prospect on its own); however before doing this he decides to switch bodies with Captain America.  Cap is now in the Red Skulls body and pleads to Sharon to understand the switch. She thinks he’s a raving lunatic and takes comfort in arms the Skull in Captain America body, which the Skull loves and drives Cap even crazier. Having just been through the Superior Spider-Man Saga we know this will only get worse next issue… 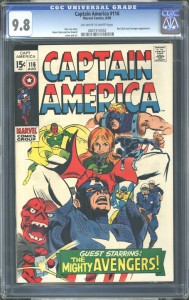 Gene Colan (pencils) and Joe Sinnott (inker) take over the cover and interior art work duties on this issue. In case you are not counting (I am), this is the fifth different creative team in fives issues since issue #112.  All great artists, I can’t remember another run quite like this one. I guess to some extent it speaks to the internal upheaval taking place at Marvel in this time period.

The Skull as Captain America sends Sharon Carter on her way, and continues to wreak havoc with Cap in his Red Skull body sending him from one trouble spot to another. The Skull takes a walk as Captain America and finds the adoration he receives from the public –revolting. Rick Jones locates Captain America with help from the teen brigade. The Cap/Red Skull basically tells Rick Jones to get lost and this confirms his inner (unfounded) fears that Cap wants to be rid of him. This moment does lead to the dissolution of the short/lived Cap/Rick partnership. Mean while the Red Skull/ Cap is making his way to Avengers mansion. The Avengers see the Red Skull at their HQ and attack and subdue him in short order. Sharon Carter arrives at the Avengers and the Cap/Red Skull with help from the cosmic cube orders her to kill the Red Skull/Cap. It must be woman’s intuition; she fights off the cube’s influence and can’t bring herself to pull the trigger. Impatient the Cap/Red skull sends the Red Skull/Cap off to the Exiles island to be destroyed. This would be a lot easier to read and write with pictures! 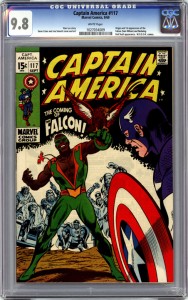 The coming of … The Falcon

Gene Colan (pencils) and Joe Sinnott (inker) continue as our creative team for the balance of this run and beyond.

In this issue we are introduced to the Falcon (Sam Wilson) and his bird Red Wing (a real falcon) for the first time. He eventually becomes Cap’s partner in issue #133.

On Exile island the Red Skull /Cap fights for his life against the Red Skull’s former minions. The Skull enjoys watching Captain Americas struggles in his old body via the cosmic cube. Cap does finally get away from the Exiles with the help of a trained falcon. Cap removes the Red skull mask he is wearing and also adds some dirt to his face to aid in his disguise. He see’s the falcon and his trainer who we find out is Sam Wilson a bird lover from Harlem who unwittingly became an employee of the Exiles. He works with the locals fighting against the Skull Exiles. Cap works with the young man, training him to fight. The locals make him a costume and the Falcon is born…

The Red Skull has been asleep at the switch while this has transpired and worse for him, AIM and the very much alive Modok (everyone thought he died in TOS#94) have detected the use of their cosmic cube creation and they want it back. More next issue…

The Falcon Fights On

My only art comment here is that for the second issue in a row John Romita Sr. has re-drawn Captain America’s head on the cover. I have seen his name on interior work of other artists as well. I assume this is done at the art directors request ( Stan Lee? ). Maybe they did not like Colan’s Cap rendition on issue #116. In any event I can’t imagine any worker let alone an artist being too thrilled about that, but it does appear to be a common practice.

Having escaped the Red Skull Exiles, Cap in the Red Skull’s mask less body continues to train Sam Wilson (the Falcon) on fighting techniques in preparation for their fight with their return battle with the Exiles. The fight does take place and The Falcon, Red Wing, Skull/Cap and the locals defeat the exiles and send them into hiding. The Cap/ Skull finally see this via the cosmic cube and prepare to take matters into his own hands.

As the Red Skull gets ready AIM and Modok are inching closer to a method of disabling or returning the cosmic cube. The wrap-up next issue.

Our creative team remains intact with no touch ups!

The Red Skull uses the cosmic cube to bring the Skull/Cap, The Falcon, and Red Wing to his castle in Berchtesgaden Germany. The Red Skull wants to beat his old enemy in his own body and transfers their bodies back. The Falcon is surprised to see he was being trained by the infamous Captain America. Battles in a flooded castle cell and the desert ensue, and then enter – Modok and AIM! They have completed their cathode device that will destroy the cosmic cube and they activate it. The cube begins to glow and melt. The Red Skull tries to use it one last time and appears to be destroyed in the process. This guy does seem to have more lives than a Saturday matinee serial, but it is always good to see him on his knees in defeat. The enemy beaten once again and our tale is at its end. 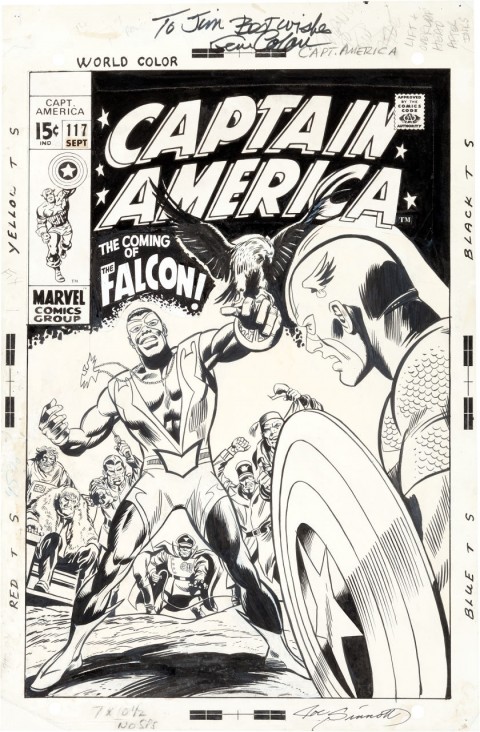 Had I done issue #120 I could have renamed these columns Captain America 1969 as all of the books were produced that year. The complete run #109-119 is well represented in the first two Captain America movies and this run had to have some influence on the screenwriters. Bucky Barnes, Hydra, Sharon Carter, Nick fury, SHIELD, the Avengers (no Black Widow though), The Falcon all make significant appearances. Not to mention the stellar group of artists working on these books as part of Cap’s Artist Alley!