I attended an auction in Vineland this past weekend and it prompted me to write another short piece on one of the WECA artists. I went to the auction because, among other things, they were offering seven Toronto-themed coasters from the early thirties.

These coasters honoured the 1931-32 Stanley Cup Champs and are sometimes referred to as “blotters” because the type of paper they were printed on had the texture of blotting paper. They were die-cut in the shape of “stars of David” just over 5 inches in circumference and featured black and white (with blue register stamped on) cartoon sketches of what today are Hall of Fame Maple Leafs players. I believe they were given away or available for purchase with O’Keefe soft drinks of the day because they have an “O’Keefe’s Big 4” logo on the back. Us older adults probably better remember the O’Keefe and Carling/O’Keefe  for the beers the brewery produced such as Old Stock Ale and Old Vienna Beer.

My interest in the coasters was not because of the Leafs (whom I hate with a passion) or in O’Keefe’s the company that put them out, but because the illustrations on these coasters were done by Cartoonist Lou Skuce who did fillers for Bell Features comics from the first comics they produced (Wow Comics No. 1) right to the end of the WECA period.

Thomas Lewis (Lou) Skuce was the “Old Man” of the WECA artists and was already famous as an illustrator in the Platinum Age before most the WECA artists were even born. Lou Skuce himself was born in Ottawa (probably right in Napean where he grew up) on July 6, 1886. That makes him 54 in 1941 when the first WECA books started to appear and just turned 55 when he started with his first work for Bell Features in Wow Comics No. 1 (Sept. 1941).

Just about the earliest work I can find is this Jack Canuck post card from about 1911 and you can see it’s an early work because Lou hasn’t yet developed that flourish  of an arabesque signature that’s associated with him.

After this the next few things I can find are a couple of 1915 cartoons from the Toronto Sunday World where he served as both an editorial cartoonist and art editor, as well as a couple of World War I era song sheets from 1917.

There is also a short article from the Toronto World newspaper that is dated Dec. 26, 1916 which explains that Skuce was a showman cartoonist entertaining in theatres of the day.

It looks like this type of showmanship was part of Skuce’s life almost right up to the end because we find ads for appearances in the Toronto Daily Star in 1944 and 1945. He gave these shows with the aid of his own invention which he called the “cartoonograph” and this projector enabled the audience to view his drawings as they were created. He must have been a master story teller as well to pull these off. 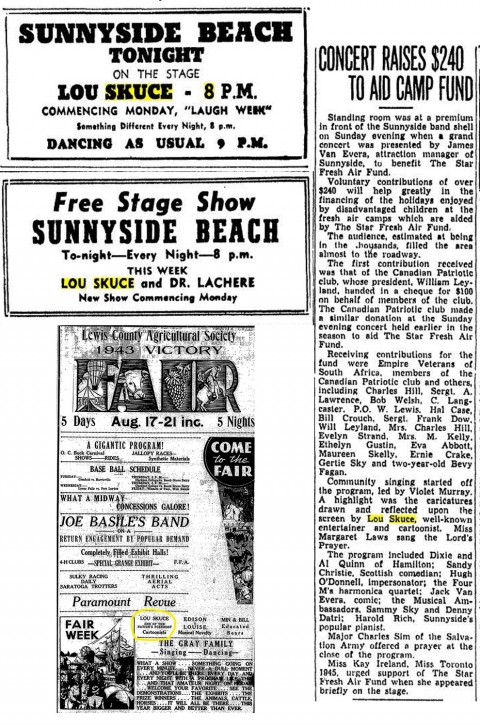 Next is an ad for “The Tip Top Man” from The Goblin (again see John Adcock on the Goblin), January, 1924, where he stands in slick twenties and thirties sartorial splendour and cigarette holder sophistication cut completely from Cowardian cloth.

In 1927 Lou Skuce left for the States for a year trying to make a go of a couple of syndicated strips. One was called “Cash and Carry” and the other “Mary Ann Gay” but this was unsuccessful and short-lived and Lou was back in Toronto within about a year. See John Adcock’s Punch in Canada post on this. On his return he was famous enough to be featured in an ad for Buckingham cigarettes and it’s also around this time that the signature goose figure (much as Sid Barron’s cat three decades later) known as Lou’s Goose (an obvious pun on his own name) starts to appear in the corners of his cartoons.

With the advent of the thirties Lou Skuce seems to have come into his own as a sports illustrator. In November, 1930 he did the cover of a program for the Maple Leafs while they still played at the old Arena Gardens and then in 1931 did the first program for the new Maple Leaf Gardens.

It was after the Leafs won the Stanley Cup that season that Skuce produced the highly collectible commemorative coasters for O’Keefe Breweries and a Jig-Saw puzzle featuring portraits of the Maple Leafs players for Dr. Gardiner’s Toothpaste. At this time he also created coasters for various beers for the rest of the decade.

In the middle of the decade (1935) Lou Skuce did the one-page, encapsulated overviews of wrestling stars of the time for Corcoran’s Wrestling Guide and here is the bridge to WECA comics because many of these one-page illustrations were reprinted in various issues of Wow Comics with registered colourization.

A year later (1936) he further contributed to the Canadian sports scene by suggesting a concept to sculptor Emmanuel Hahn that resulted in the final design of the Lou Marsh Trophy that is presented annually to the outstanding Canadian athlete and was won by Phil Edwards that year for track and field.

His first work to appear in a WECA comic was in the inside front cover for Wow Comics No.1 and showed a man being chased by a ferocious bear and this was the type of work he did for Bell Features.

He also did the first couple of covers for Joke Comics (still have yet to come across a copy of Joke Comics No. 3 so I’m not sure if he did the cover for that one). I wonder why Bell never thought of giving him a full feature, but perhaps because of his fame as a sports cartoonist, he was priced out of that picture.

In the end issues of the Bell books he began doing full page cartoon ads for Smith Brothers cough drops and these most often appeared on the inside back covers of these books. I think that these were exclusive to Bell Features and didn’t appear anywhere else.

At the end of September in 1945, just a couple of weeks after giving the shows at Sunnyside Beach in Toronto that were described above and just about the time he was creating the Smith Brothers ads, Lou Skuce suffered a hospitalizing home accident. This is described in a Toronto Daily Star clip.

He recovered after about a week or so in the hospital and continued to produce material such as a mural for the Edison Hotel at Yonge and Gould streets in Toronto (right across from where the outdoor chess players used to be right next to Sam’s Record Store).  Lou Skuce died in 1951 at the age of 65.