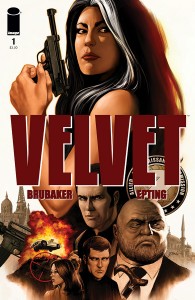 There’s that element of mystery, intrigue, danger and sex appeal that just grabs me and won’t let go.  I’ll kick back and watch countless hours of James Bond, Mission Impossible, Burn Notice or Archer to satisfy my need for espionage goodness.

Last week Velvet #1 hit the comic racks.  This is a new Image series by Ed Brubaker and Steve Epting.  These two creators are my favourite comic duo since “the Caped Crusader and the Boy Wonder”.  Their work on Captain America is unbelievable (and I don’t like to throw that word around often), and I consider it some of the greatest work ever in comics.

I have even said that if “Ed Brubaker and Steve Epting wrote a cookbook… I’d buy that too!”  So when I saw issue #1 of Velvet, I grabbed it.  I had no idea what it was about, but I had to have it.

And I am very glad I did.

Velvet is about a secret organization called “Allied Reconnaissance Commission” or ARC for short. This organization is so secret, other secret organizations don’t even know about it’s existence.  But the namesake for this title is Velvet Templeton.  She’s the Personal Assistant for the Director of ARC, but there is more to her past than what is revealed in issue #1.  She has had a long history with ARC, and no doubt her past will come out in future issues.

The story starts off with the murder of an agent after a completed mission, and that leads into the investigation into his death, and the possible chance of having a double agent within ARC.  The issue ends with our heroine… well… maybe you should pick up a copy and keep me from spoiling it for you.

Velvet #1 features amazing artwork by Steve Epting.  I am a huge fan of his art.  As I said before, I consider his work on Captain America to be the best that comics has to offer and it continues in Velvet.  The artwork has a gritty, realistic style that brought the pages of Cap to life.  Epting is able to capture the intensity and intrigue of a globe trotting spy story and captures the imagination of (Robert) Ludlum or (John) LeCarre.

Ed Brubaker is a masterful story teller.  Which is no doubt because of the amount of awards he has received.  But you can tell by reading Velvet that this is his dream project.  On, what will become the letter page, Brubaker explains the origination of Velvet and that this project has been in the works since 2006.  He wrote that mystery novelist Ross MacDonald said “the longer you can wait from coming up with a story until actually writing it, the better the story would turn out”.  That explains why the story telling in Velvet #1 is amazing, it has taken time for the story to mature and blossom into something truly great.