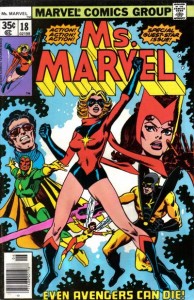 Honestly I’ve been getting enough submissions lately to consider running 2 Spotlights a week, one by me and one by you.

This week’s Undervalued Spotlight was submitted by Peter from B.C. I actually had this lined up for a couple of weeks out but on last week’s Spotlight a commenter called for this book!

Best to satisfy demand asap I say. My pick (oh and it’s a good one) can wait til next week.

Peter’s book is a late Bronze beauty. I’ve always thought the late Bronze Age to be laden with undervalued gems. This week’s pick is one of these gems.

Let’s hand things over to Peter.

The comic book collecting world has often undervalued the comic books of major female characters.  This theme continues in the case of Mystique, who is featured in today’s “Undervalued Spotlight”.  Mystique’s development in comics happens sequentially, as if Chris Claremont wasn’t sure what to make of her: she first appeared in Ms. Marvel #16 but she is called Raven Darkhölme, and then she is named Mystique in Ms. Marvel #17.  Today, I will focus on Ms. Marvel #18, which features Mystique’s first full appearance in comics.

As a comic book reader, I always felt that the comic book medium didn’t fully express Mystique’s deadly skills.  I remember seeing the first movie depiction of Mystique in the original X-Men movie.  Mystique was kicking Wolverine’s butt beneath the Statue of Liberty and she more than held her own against our favorite clawed mutant.  Seeing Mystique’s deadly fighting skills and deceptiveness in the movie really made it clear to me why she is such a powerful supervillainess.

Since Bryan Singer’s original X-Men movie, Mystique has appeared in virtually every subsequent ensemble X-Men movie, and this fact alone should make this comic book worth more than $75 (current guide value) for a near mint minus copy.  She is set for another movie appearance, in next year’s X-Men: Days of Future Past, and she will probably play a prominent role in the plot, just as she did in the original comic book version of Days of Future Past (Uncanny X-Men #141 and 142).

My only explanation about why Mystique’s comics are undervalued is that comic collectors will gravitate towards characters they can identify with.  There is greater demand for Sabretooth’s first issue because Sabretooth is like an evil version of Wolverine.  Venom’s first full appearance issue is more sought-after than Mystique’s because Venom is an evil version of Spiderman, and the Todd McFarlane artwork is also pretty cool.  There is an inherent “cool factor” in the characters of Sabretooth and Venom.  In the final analysis, Mystique can’t really be pinned down, and she just has too much “mystique” for collectors to identify with.

Disclaimer: This article is not meant to be investment advice, merely for information and entertainment.  Peter does not own any of the comics mentioned in this article.