One great result of having a forum to make posts about WECA comics is that the readers can make corrections and cleanups of what I’ve written as well as offer new information that can fill in essential blanks, see my post from two weeks ago for example. Here are a couple more “blanks” for you all.

In the art world some pseudonyms are quite well known such as El Greco and Caravaggio are firmly attached to real known individuals and others such as Banksy are not. The WECA period has more than its share of creators we know little to nothing about and some of these chose to shield themselves with pseudonyms. Today I want to share three of them with you.

The first appears from almost the start of the WECA period at the end of 1941 in Aces Three Comics No. 1 and Grand Slam Comics No. 1. This was a strip called “Pat, the Air Cadet”  and was signed “Macduff.” I have some examples of splashes from later issues but have never come across any firm clarification as to who this person was.

For some time I thought that this might be a pseudonym for water colour artist Ann MacIntosh Duff who was born in Toronto in 1925, making the age right. It seemed like a good fit but I managed to locate her and speak with her recently on the telephone and she made it clear that she had never been connected with comic books. A more likely explanation comes from Robert MacMillan (author of that great piece on Anglo-American comics in John Bell’s 1986 book, Canuck Comics and who is presently working on an Encyclopedia of Canadian Cartoonists), though it’s credence has little more weight to it than that of a rumour. In his research he has heard that “Macduff” was a pseudonym for the team of Ted McCall and Doris Slater. He even goes as far as to say that Doris Slater may have been Ted MCall’s sister –in-law.

Doris Slater is best known for her work on the “Penny’s Diary” strip (see my earlier post) in later issues of Active Comics for Bell Features but she was already signing work for Anglo-American Publications in early 1942 such as the “Martin Blake, The Animal King” strip in issues of Aces Three Comics (the early title for the eventually long running Three Aces Comics).

Doris Marie Slater was born in Chatham, Ontario (Ted McCall’s birthplace as well) in 1917 and married Russel Beurling Titus in 1944 and this man doesn’t sound like he’s a relative of Ted McCall, but you never know. Sadly, Doris Titus was killed in a head on collision with a drunk driver in 1964 on her way to her summer cottage in Arden, she was 47.

Here’s one from Bell Features and signs his or her work as “Virgan.” His or her stories appear in Wow Comics 17 (Oct./Nov. 1943), Triumph Comics  17 (Dec./Jan. 1943-4), as well as Dime Comics 13 (Feb./March 1944) and two more stories in Dime Comics 14 (“Spooky Tales” is unsigned and the very politically incorrect “Shaddrac The Salesman” story is signed “Virgin” for some reason). There is also one more story in Triumph Comics  17 entitled , “Hitler Has Troubles,” which, though unsigned, looks suspiciously like Virgan’s work. Virgan’s work is simplistic, almost minimalistic and a little stilted but very effective with fine story telling.

The first impression I get of Mr. or Miss Ab Normal’s creations is that they could easily hang out in the pages of the underground comics of a quarter century later. These panels look as if they belong alongside Robert Crumb and Gilbert Shelton’s work and even interchangeable with panels from the Furry Freak Brothers stories.

They all have that slightly substance-addled haze to them that carried the hairy, denim bell-bottomed landscape of the early seventies in those underground books. “Tabby” from Triumph Comics 29 is my favourite and I show its four pages off here. 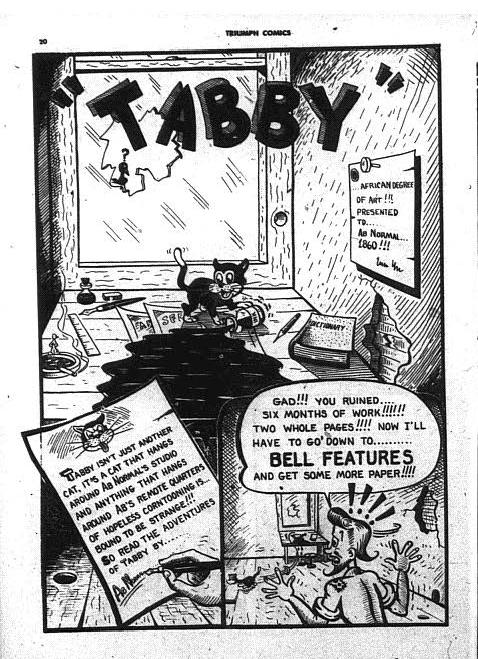 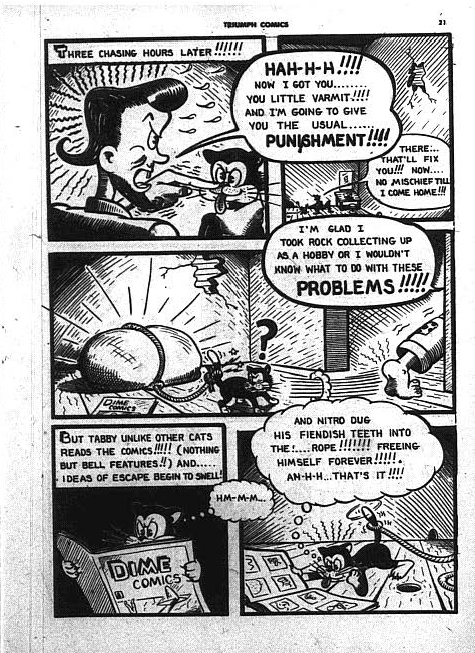 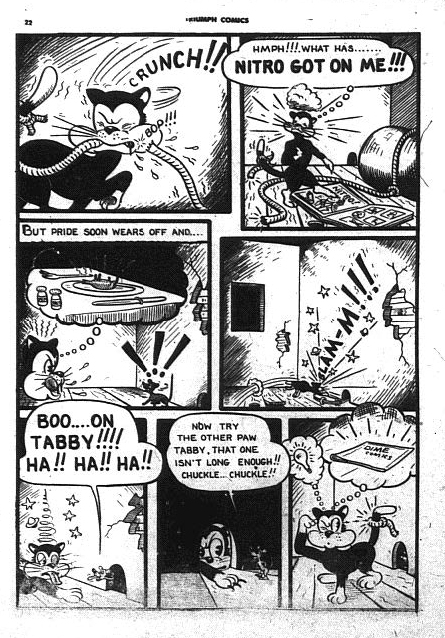 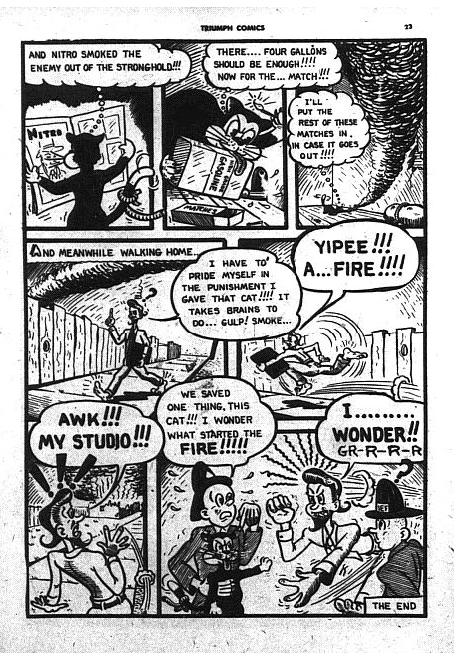 If anybody can add to, clarify, or correct any of this it would be immensely appreciated.