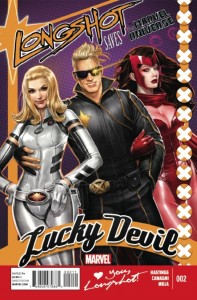 You know, when Archie G first opened this joint, the menu was drastically different from what it is now.

Back then, they weren’t really sure what people were gonna like, so they offered all kinds of different cuisines. Every cuisine you could imagine, all different styles. But those days are long gone.

Funny though, lately, it seems like we’re trying to get back and try new takes on some of those old dishes. Remember last week, when we talked about how SUPERMAN AND WONDER WOMAN #2 was really just an Old School Romance Comic?

What? You didn’t read that? Alright. Go ahead and read it.

Just like there used to be a lot of Romance comics around when Arche G first got into the biz, there was another genre that was pretty well represented…Comedy. And it seems like publishers are trying to get back into it.

In the 1960s, Marvel changed the rules of the game. Instead of having Romance comics, and Comedy Comics, and Mystery comics, and Monster comics, why not have ALL those elements in ALL their comics. Why come out with A DATE WITH PATSY when you can have all the angst of teenage life in THE AMAZING SPIDER-MAN? Why go to the trouble of publishing STRANGE WORLDS when you can give them all the science fiction they can handle with the FANTASTIC FOUR?

For the last –oh, I don’t know, half a century or so– that’s what comic book readers have gotten in just about every book they’ve taken off the spinner rack: super folks, sure, but with dollops of soap opera, sci-fi, horror, fantasy, and of course…comedy.

In Nowsville, the publishers are making efforts to return to some of those genres by…disguising them in superhero books. Last week I brilliantly deduced that SUPERMAN AND WONDER WOMAN is a Romance comic.

LONGSHOT SAVES THE MARVEL UNIVERSE #2 is a Humor comic disguised as a superhero book.

Just not a good one.

—We interrupt this incredibly thoughtful and well-written review for a Newsbreak. Inside Sources have provided us with a shocking piece of video from an impromptu meeting of Marvel Bullpenners at Churrascaria Plataforma Brazilian steakhouse in midtown Manhatten…after five rounds of drinks. 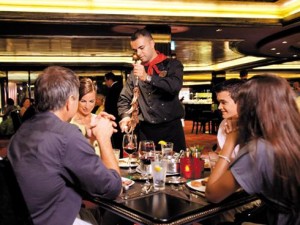 BULLPENNER A: Man! The kids sure seem to like dat..what’s his name? The dead character everybody keeps telling me is funny? (I need anudder Margarita)

BULLPENNER A: Dats de guy (HIC). Who do we have that we could feature in another funny book? I don’t mean funny book. I mean Funny funny book.

BULLPENNER C: What about the funky guy with hollow bones and JOE DIRT hair?

Everybody thinks they’re funny. Everybody. Ted Bundy thought he was the master of knock-knock jokes. Bernie Madoff thought his limericks were hysterical. Carlos Mencia.

But telling a joke or two, and WRITING comedy are two different things.

Comedy is about Contrasting Forces. An odd character in a mundane world. A mundane character in an odd world. ONE ELEMENT that doesn’t fit in with the rest of Reality.. MONTY PYTHON’S FLYING CIRCUS got rich and famous by doing that. A Penguin on the Television. A Manly Lumberjack Singing About How He Loves to Wear a Brassiere. Gangster Brothers Who Rule the Underworld By Using Sarcasm…and a Hedgehog Named Spiny Norman.

Longshot writer CHRISTOPHER HASTINGS guts his story from the very beginning. Some idiocy about Longshot getting his hands on a Cosmic Cube and all of a sudden ALL REALITY IS IN FLUX! How can you break the rules, if there aren’t any rules. The sole purpose for doing so is to give him free reign to justify any sight gag he thinks of…any “hilarious” line that pops into his brain.

And just so we don’t miss the point, he tosses Deadpool into the story..armed with a magic wand. Why? JUST BECAUSE CHRISTOPHER HASTINGS WANTS TO GIVE HIM A WAND!

There are no stakes. No need for a reader to become invested in the story. No reason to care about the characters. It’s an excuse for a writer to have EVERY single word balloon contain nothing but a one-liner. Everybody speaks with the same “comic” voice –in the loosest definition of the word possible– in a plot that goes nowhere because it has nowhere to go.

Longshot, one of the most unique, interesting characters in the entire Marvel Pantheon, deserves better than a crappy haircut, fetish gear, and clunker sex jokes.

I give this a piece of dry, nasty marzipan.