That horn honking at the road meant the mail lady (as we called her then) had my package from Robert Bell! I practically fell over my own two feet, the dog and the terrain on my way to the mailbox! I tried to contain my excitement, but it was the biggest package I had ever seen in the mail before.

Now my Mom and Dad knew I had ordered some comics by mail order and weren’t too pleased about it. They thought I spent $20, when in actuality I had spent $200 or so in US funds.

The package was about 10 inches high and had been strapped together between cardboard and wrapped again in brown wrapping paper. The corners were somewhat torn and slightly blunted but the contents were intact. 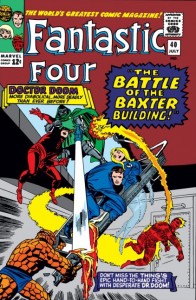 I carefully opened the package and felt the thrill of seeing the stack of comics I had ordered. They were excellant copies. All VF and better. I started at the top and worked my way down. The Fantastic Four were on top. And this was the first time I had seen most of these books except in the “ON SALE NOW” pages in the comics. I started at FF#40 and went to #65. And yes, I do remember this clearly. Here were what I was to come to consider the beginning of the best 50 issue run in comics. I know I didn’t get from 40 to 65 complete but I had the first Inhumans, #44 and 45, the Galactus Trilogy, first Black panther at #52 , Doc Doom and the Surfer saga and the great Sandman and Blastaar issues in the early 60’s.

Then I got down to the Amazing Spider-Man issues! Issues #39-57 except for the issues I already had, all in gorgeous condition. To my mind they still had the fresh look of brand new books! At the very botton of the pile was the Holy Grail! ASM#1! Of all the books in the package this was the most disappointing. It looked like it had been at one time, scrunched up into a ball and then uncrumpled and flattened out.Knowing what I know now, it was at best a 4.0. I wondered how anybody could beat up a comic like that. I did get over it though. After all, I was 10 years old , and had just invested in my first ASM#1. I sure didn’t know anyone else who had one! So I rationalized all those old copies of Spidey #1 must look like that except for the few in the world that were in great shape. I figured I had a lot of time to get my hands on one of those.Maybe even find it in somebody’s attic or basement. Believe me, I started looking and as a matter of fact am still looking.

That was the first of many purchases from Robert Bell as well as a couple other vendors; Comic sales Company comes to mind and Howard M Rogofsky. But my favorite always was and will be Robert Bell! Creator of the now must have comic bags, and because he was an honest businessman who cared enough to send quality books to this 10 year old kid in Canada that actually sent cash in the mail.

That is my Origin story I guess! I eventually sold my entire runs of every Major Marvel Superhero in 1992 just before the crash and stayed away for a decade.I always vowed to regain my collection and you will be happy to know I have once again lost my mind and now continue to search for the Holy Grails out there!

Happy Collecting!! More Tales from the Comicdenn to come!