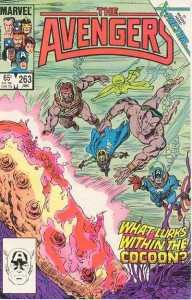 What comic featured the 1st appearance of the X-Factor?

Well, if you said 1963’s X-Men #1 you wouldn’t be wrong. Angel, Beast, Cyclops, Jean Grey and Iceman all indeed made up the team that was once the X-Men. The X-Factor of course are made up of the exact same team members.

Not buying it? Want the X-Factor X-Factor not the X-Men X-Factor?

OK then let’s consider Amazing Heroes #83. This popular fanzine featured a 5 page preview of the new team before the

No? A write up like this doesn’t really count? Want the comic comic, the one with the story and the art?

OK then I’d probably say it was X-Force #1 that 1st assembled the X-Force team. That perhaps is technically the 1st X-Factor.

The lead in story published a month before in Fantastic Four #286 was the 1st issue that featured Jean Grey and the other old X-Men but they weren’t really a team yet in that issue. Fantastic Four #286 features Reed Richards freeing Jean Grey from a cocoon the Avengers had found her in in a previous Avengers issue.

Aha! So now we are getting somewhere! It was the Avengers that started this whole thing.

The Sub-Mariner joins the Avengers in this issue and on their 1st mission the team find a cocoon at the bottom of Jamaica Bay. In the cocoon they find the long thought dead Jean Grey.

This was early 1986 and the X-Men were at the height of their popularity. It only made sense that Marvel start producing other X titles. X-Factor was the 2nd X title! Recasting the original team seemed like a good idea at the time and it did work. The series was hugely successful though they had to get pretty creative (or lame if you want to go that route) to recon Jean Grey back into continuity (remember she died in the conclusion of the epic Dark Phoenix Saga that ran through the X-Men 129-138 back in 1980).

If I were you I’d actually pick up a copy of Fantastic Four #286 and a copy of X-Factor #1; these three books really do belong together.

I like that Avengers #263 has traditionally received the least speculation of these comics, I like how the issue features Sub-Mariner joining the Avengers, I like that it’s an Avengers issue and I like the fact that this is the book that started the whole thing on its way.

I also like that the cover and interior art boasts John Buscema pencils, John is one of my favorite Marvel artists.

Forget about slabbed copies, pick yourself up a handful of nice, tight, raw copies and enjoy. If you’re one of those types and must have the book graded you’re in luck because you can grab a CGC 9.8 for about $35 and a CGC 9.6 for about $25. I’m still recommending the raw copies for $5 though.

This is another fun comic to collect, the cost is negligible and for your troubles you get a great book that in its way is an important book. It’s a book that is tied to another book that in turn is tied to a major and successful title launch with a massive print run. These are all points that add to the book’s collectability by the way.

The 43rd edition of the Overstreet Comic Book Price Guide shows $6 as the 9.2 price.