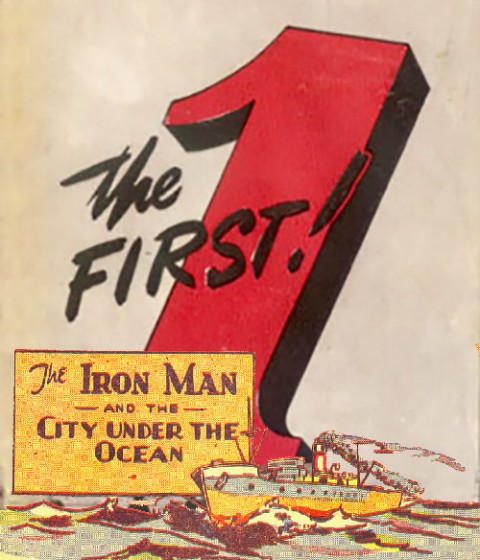 In this post I want to discuss three WECA firsts starting with a curiosity I take to be one of the first “horror type” stories in comics. “Grim Tales” was a brief two-story run in Wow Comics No. 12 (Jan.-Feb. 1943) and No. 13 (March-April 1943) by Don McKague (my dates for Bell books are all extrapolated estimates, since they stopped listing them in the indicia after the first early issues of their titles). For me, these two stories foreshadow the first true horror comics of the late forties and the horror boom that started with E. C. comics in 1950.

The art, by the creator of the superhero, The Terror, in Joke Comics No. 5 (Nov.-Dec. 1942), was a little crude but showed promise and the idea of a horror story is all there and both stories even have an old witch front piece of the type that became the signature of E. C. horror books over half-a-dozen years later. McKague went on to become a nationally prominent portrait photographer in the fifties and was selected by the Queen to provide her portrait series to accompany her 1959 visit to Canada. Here’s the full, four-page second story, and it’s a werewolf story, so that you can form your own opinion.

The second first comes from a clipped newspaper article provided to me by Doris Slater’s daughter Patti. It has no indication which Toronto paper it’s from, but I strongly suspect it could be the Telegram, but it’s clearly from 1941 when Doris, who was born in 1917, was 24.

Her first work was most probably on “Pat the Air Cadet” in Grand Slam Comics No. 1 from Sept.-Oct. 1941.  Now the only by-line that appears on “Pat the Air Cadet” stories is “MacDuff,” but the artwork is inescapably that of Doris Slater. “Pat the Air Cadet” also appeared in the first few issues of Three Aces Comics, called at the time, Aces Three Comics, along with Doris Slater’s own signed strip called “Martin Blake – Animal King” which was Doris’ first officially acknowledged credit in comics. Her best known work was probably her “Penny’s Diary” strip that appeared in later issues of Active Comics and, in fact she was the only woman artist to do a cover for Cy Bell on Active Comics No. 21.

Researcher Robert MacMillan first twigged me onto the fact that this strip was probably the work of Ted McCall and Doris Slater and the more interesting fact that Doris Slater was Ted McCall’s sister-in-law. This was confirmed when I had a chance to talk with Doris Slater’s niece, Nancy Lee, born Nancy Donaldson. Nancy’s mother was Minnie Slater, Doris’ elder sister, and she married Celtic Donaldson, who was the brother of Elsie Donaldson, who married Ted McCall. This connection with Ted McCall was probably Doris Slater’s door into comic work and Ted, with the knowledge that his sister-in-law was young artist, probably made the opportunity available to her by coming up with the idea of a female air cadet grab the girls in the Canadian comic book audience.

Here is a poem by a young female reader named Margaret Skaroff of Toronto which appeared on the inside front cover letters page of Grand Slam Comics Vol. 3 No. 11 dated Oct. 1944 at a time when some boy readers were writing in that “Pat the Air Cadet” should be one of the strips dropped by Anglo-American:

It’s a change to read about a girl

Instead of always guys

And Pat the Air Cadet’s a whirl

To capture all those spies.

All of this would make Doris Slater the first woman creator in the WECA period and the first female creator in Canadian Comics in general. On top of this, if she started in Sept.-Oct. 1941, she would be among the earliest female creators in comic books period. For this reason, as well as her contribution to the WECA comic period, Doris Slater (Titus is her married name and the one she died with as a victim of a head-on car collision in bad weather on the highway near Stittsville in June, 1964) is my leading nomination for induction into the Joe Shuster Award Hall of Fame.

My last first is a list of the first appearances of 100 of the WECA period’s most famous feature characters. There are a number left off, particularly because I don’t have all the data for the Maple Leaf first appearances that came after their No. 1 issues, but here are the ones that came to mind on my first sweep of the books:

Collectors are compulsively drawn to the “first of things,” the genesis, the birth, the earliest form…. This, they want to possess more than the others, perhaps because owning the first somehow gives you control over the whole run and certainly “control” (a small place above all those others who don’t have the first appearance) over other collectors. The “firsts” you have are talismans that you can wear proudly and even garishly like gangsta chains; the ones you don’t have become grails. Collecting is a small but crazy world.