I was at my friend Bob MacMillan’s place last week and he showed me two Colossal Comics with Adrian Dingle covers I had not seen before. These do not have war-themed images like the three covers we are familiar with, so they might be post-war issues. Here they are: 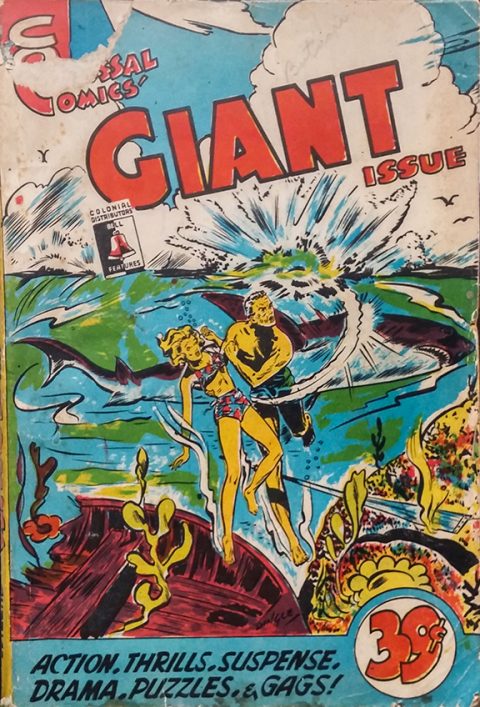 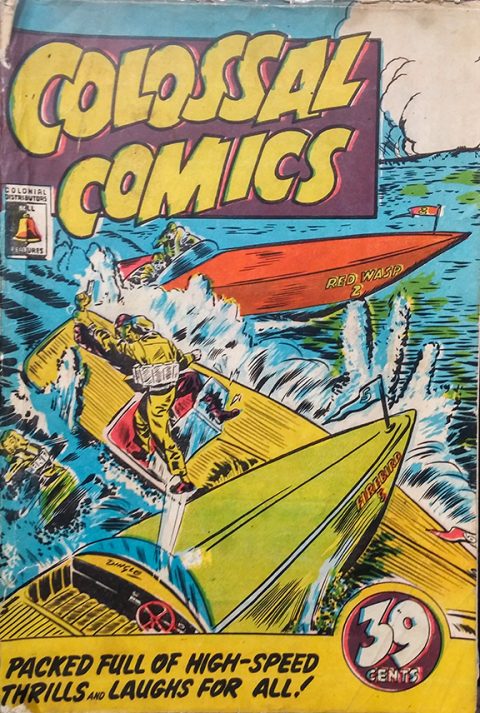 The back covers of these two issues are identical and sport a collage of Bell heroes by Adrian Dingle that is identical to the back cover of the Colossal Comics with the palm tree front cover, except that the boy fishing on the back the palm tree cover is in full colour: 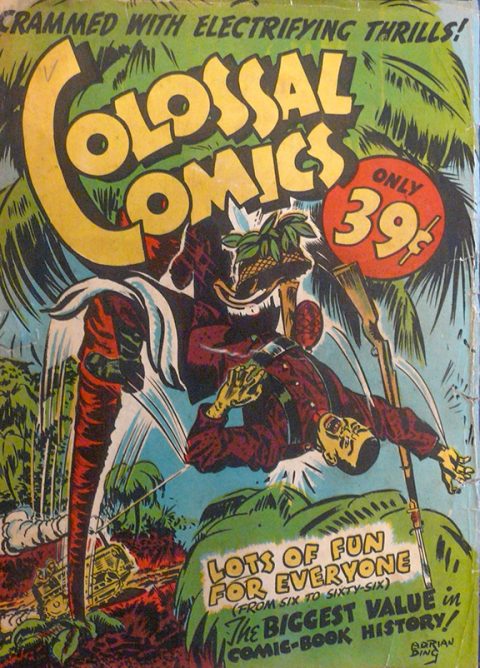 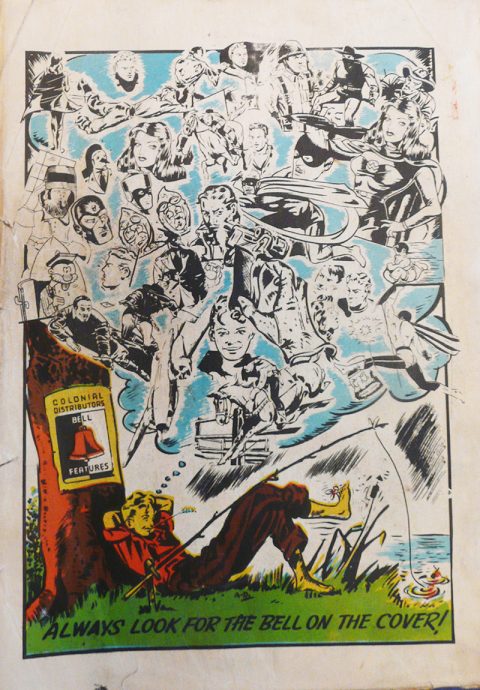 The back-cover collage is interesting because it shunts Nelvana to the backwater of the upper left corner with her back to the reader while she walks away. I can’t find Johnny Canuck in the crowd unless it’s the head just above Capt. Wonder and next to the back end of Tang. The Wing seems to be the largest image on the page and is taken from the splash of Jerry Lazare’s second Wing story in Joke Comics 15. I wonder if this is any sort of statement by Dingle about how he rated the Bell characters or just a result of the images he had at hand when he constructed the collage?

What the two new covers do tell us is that perhaps there will new, previously unknown covers, versions, and issues from the WECA era showing up periodically for quite a long time and that our WECA Price Guide may not be as definitive and complete as I once thought—but it certainly is the best and most comprehensive up until now.

Speaking of the guide, I’m just waiting for some ad copy from Comic Link and International Comic Exchange before we go to print. My Heroes of the Home Front is in the printing process overseas and will take about 3 weeks before the final copies are produced and then another 5 weeks to ship from China. I should have them in hand by the end of June.

Revisiting the Idea of a WECA Superhero Team

My second column ever on Comic Book Daily, over five years ago, was about seeing if we could put a formidable team of WECA heroes together. I mean, superhero teams proliferate in the modern comic book universe (JLA, Avengers, Defenders, Alpha Flight…) and there’s a marvelous movie that has just opened with about 20 heroes in a two-and-a-half hour on-screen choreography. What sort of teams would have made sense 75 years ago in the WECA universe?

Five years ago, as I was just starting to find out about WECA comics and my choice for a Bell Features team consisted of Johnny Canuck, Nelvana, Thunderfist, The Brain, and Capt. Wonder. I’d like now to do a re-think of this, knowing more about the scope of WECA comics and the characters that came out of the four main publishers and the handful of smaller companies that existed at the time. This time let’s look at the possibilities that each company had to offer.

First let’s look at Bell Features again. Here we have the most heroes on offer and, therefore, the most to choose from. There’s the female heroines, Nelvana, The Wing, and Polka-Dot Pirate and the largest array of male heroes under a single WECA publisher’s roof. Let’s leave aside the war time fliers, commandos, cowboys or detectives except for Johnny Canuck, The Invisible Commando, and Super Commando. This leaves is with the main costumed candidates: Speed Savage, The Brain, Thunderfist, The Penguin, Mr. Monster, The Dreamer, Nitro, Capt. Wonder, The Wing, and The Polka-Dot Pirate, plus the three enlisted heroes mentioned in the previous sentence.

Of all the Bell heroes mentioned, I’ll have to take Nelvana as the lynchpin of the Bell team. She’s female and of mixed race—a half-aboriginal demi-goddess—and possesses supernatural abilities. Around Nelvana I think we could add four other heroes to make up the Bell team. Of all the Bell heroes mentioned, I think that we could jettison those heroes that weren’t really given the chance to fully develop such as The Polka-Dot Pirate, The Dreamer, and Mr. Monster. I think I would do the same for the enlisted heroes Invisible and Super Commandos and even Johnny Canuck because what does he really bring to the game other than the iconic name. I think Capt. Wonder should be another discard because is clearly little more than a Captain Marvel clone.

This leaves us with Speed Savage, The Brain, Thunderfist, The Penguin, Nitro and The Wing. Nitro has always been a mystery. He has no back story and no super powers and is perhaps the weakest of these remaining heroes, therefore, I’d remove him from the candidate’s list. The other two non-superpowered heroes are Speed Savage and The Penguin and of these two, The Penguin seems to have the least scope, even after he dropped the tuxedo and his bill became shorter with his transformation into The Blue Raven (Slam-Bang Comics No. 7), so I would probably drop him. This leaves us with Speed Savage, Thunderfist, The Brain, and The Wing who I think would round out the Bell team as nice complements to Nelvana. So, that’s the Bell team I’d put together, but I welcome readers’ choices.

Over at Anglo-American, Freelance was the flagship character and should head up any hero team they can come up with. I’d include Commander Steele with all that power elixir running through his veins to add real ‘punch’ to the team, and maybe The Crusaders with their super rocket ship and gadgets could add a little bit of a different angle to the team’s competence.

We could add one more member to round out the team. It could be South Sea adventurer Red Rover, or brainy detective Dr. Destine, or soldier of fortune Terry Kane, or even Corporal Kip Keene of the RCMP, but I would probably choose Pat the Air Cadet who’s been through enough adventures to add some feminine competence and resourcefulness to the team. So, the Anglo-American team I’d come up with would be Freelance, Commander Jack Steele, The Crusaders, and Pat the Air Cadet. 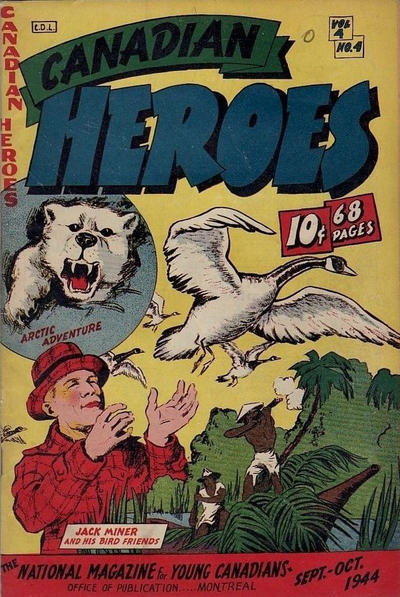 In Montréal, Educational Projects really can’t put together a superhero team with its sole fictional hero being Canada Jack. It could, if you think about it, draw upon a team of personalities from Canadian history. Imagine John A. Macdonald, Billy Bishop, Jack Miner and his birds, La Salle, and Laura Secord working in concert to take on an alien threat to the existence of Canada. 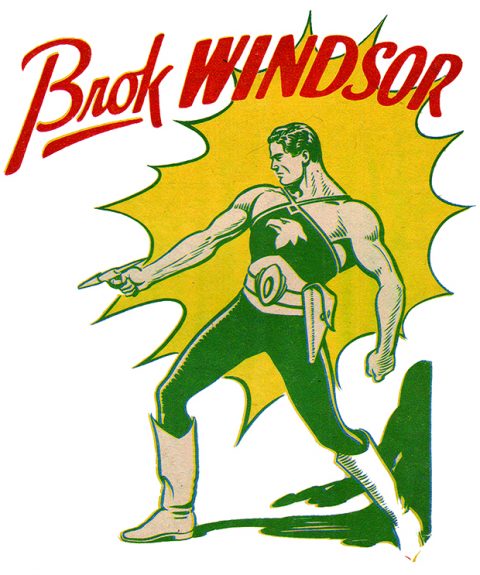 In Vancouver, Maple Leaf could come up with a decent West Coast team consisting of Brok Windsor, scientific gadget guy Cosmo, Ernie Walker’s noir detective The Hand, and their first hero quasi-Sub-Mariner clone The Iron Man. The question you’d have to ask would be which Brok would it be? Would it be the 12 ft. adventurer from The Land Beyond the Mists or the normal sized, post-war who managed to perhaps save some of his fantasy gear from The Land Beyond the Mists? The other thing you’ll notice from the West Coast company is that they really didn’t have a female super-hero unless you can contrive Circus Girl or Brok’s heart throb, Starra, into one.

Before we leave Maple Leaf I should make mention of an intriguing hero who only appeared in a back-cover ad for the company on the back cover of the second last issue of Bing Bang Comics (Vol. 3 No. 29). His name was Super Canuck and he looks like he was drawn by John Stables. He held a lightning bolt in his right hand and had a maple leaf emblazoned on what looked like a championship wrestling belt across his midriff. He looks like he could have made a formidable character, but it was unclear if his role was just emblematic advertising for Maple Leaf or if he was intended to eventually have a strip of his own. He certainly would have been a lead candidate for a Maple leaf team.

How about a team from all the leftover super-heroes, those from some of the smaller publishers? We could even pull in Canada Jack into this one, since he’s stuck on that Educational Projects island all by himself out in Montreal. For such a team we could have Canada Jack, Zor the Mighty (from Century), Captain Victory (from Rucker’s 2nd Weekender issue), Ed Shecter’s Captain Daring (from Lightning Comics), and Aram Alexanian’s Nemesis (from Lightning Comics No. 12).

How hard would it be to put together a female WECA super-heroes team from across all the WECA publishers? You couldn’t avoid taking Nelvana and The Wing from Bell, but I’d leave off Ross Mendes’ The Polka-Dot Pirate just so Bell wouldn’t totally dominate the team. We could call on Pat the Air Cadet from Anglo-American. She battled all sorts of villains and monsters in one of the longest runs for that company. We could stretch things a little to pull in Joseph Hillenbrand’s Tomi, The Girl from Tomorrow from Educational Projects and have her use gadgets and weapons from the future. Perhaps Starra or Circus Girl could represent Maple Leaf on the team.

Finally, what would be the ultimate hero team from across the board of all the WECA publishers if we accepted one hero from each of the publishers. I think you’d have to take Nelvana as the Bell representative, Freelance as the Anglo-American choice, Brok Windsor as the Maple leaf choice, and Canada Jack from Educational Projects. It would be difficult to see who would come out as the leader of the squad, but I think personal dynamics would be very interesting with the female hero having the only real superpowers.

It’s too bad none of the WECA publishers thought of putting a hero team together. They did allow a handful of crossovers, but never had the vision or desire to make up a Canadian super-hero team. We’d have to wait over three decades after the WECA period for a proper Canadian super hero team to appear. The teams I’ve suggested could have produced an epic WECA Infinity War and I wonder which of them would have been left standing.