Think back, even imagine, a time before our internet brains, before even our TV brains… when things inside our heads were much quieter and much clearer. Think back to the time of the Canadian Whites when tension came not from a barrage of digital and video bits streamed into our cortex but from a sustained home front war effort. Imagination didn’t have its dots connected with computer generated imagery. Here’s a war era imagination machine.

Canadians had to conserve gasoline, paper, scrap metal, and since the Axis had gotten control of world rubber supplies that had to be conserved as well.

Silk stockings, new appliances, and car tires just about disappeared.  Remember also that fathers and brothers were probably far away from home and that mothers and grandparents had to make things happen. Gifts were often homemade and practical or perhaps made from recycled materials. War bonds and war stamps were also encouraged as Christmas gifts by the Prime Minister of the time.

Though Christmas comic covers were plentiful during the American Golden Age, they only occurred a couple of times and here is a rare Christmas cover from the WECA period.

In Santa’s sack you can see brother and sister Peter and Peggy who have adventures in mansions and haunted castles in England (drawn by Ernie Walker and the longest running feature in Lucky Comics) and in the turban in the middle is the Genie from Vernon Miller’s “Danny and his Magic Ring” feature. Above the Genie, in the pith helmet, is surveyor Steve Nelson, who was trapped in Malaya, the area around Singapore, when the Japanese invaded and who carries on a spirited resistance fight under the occupation. On the right, in the mask and fedora, is Phil Dauntless as The Black Wing, apparently Maple Leaf’s only masked crime fighter.  This was a series that evolved from Ether Escapades and was drawn by Bert Bushell. Finally, the child with the curly black bangs and the blue cap, is the title character “Lucky” who began in Lucky Comics Vol. 1 No. 3 (drawn by Ernie Walker) and the splash panel from that issue best explains him.

Here also are the first and last pages of Sid Barron’s take on the Dicken’s Classic “A Christmas Carol” that was published by Educational Projects out of Montreal in their one shot Classics Comics clone,  Famous Adventure Stories. Sid Barron went on to produce a Christmas Carol colouring book for the same company a year or two later. 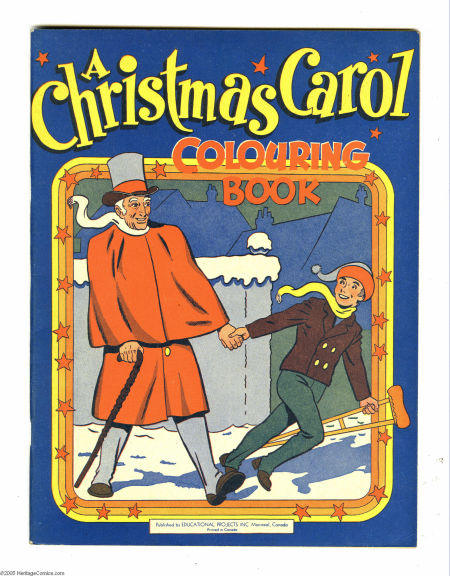 Gerald Lazare (Artist on Jeff Waring, Phantom Rider, The Wing and creator of Nitro, Drummy Young and the Dreamer) has shared a couple of remembrances  from his early Christmases and I wanted to pass them on to you:

In 1939 when the war began I was just turning 12 years old and we were still living in the Junction (when I turned 13 we moved to the St. Clair and Dufferin area) and I was an only child. Both my parents were from Montreal and came here (Toronto) and I was born here and all my other relatives were back in Quebec and rarely visited. So at Christmas in 1939 my parents, who were in the millenary business, had their own store. Stores at that time stayed open to 10 at night and the Christmas season for those people who sold hats and scarves and gloves was a pretty busy time so Christmases at our house were never that involved but my mother was an excellent French cook and seamstress and she was always knitting. (Knitting was very big during the Second World War… wool was still the main thing since synthetics still hadn’t come in. She would knit sweaters, scarves and socks for the boys overseas and my mother was always knitting, when she wasn’t in the store she was knitting or cooking.)

My mother and dad had two friends from the West area and they used to come every Christmas and they would bring gifts because I was the kid. For two Christmases they brought me the Chums Annual that was published in England. This must have been when I was about eight or nine in the mid-thirties. I knew nothing about these annuals and what was going on in England, even though I knew all about the American comic strips. I couldn’t believe this book. It was so big and full of stories and drawings. I was crazy about that book and it thrilled me so much that they did it again the following year. But what I also remember was that these books were second-hand. We were still feeling the effects of the Depression and people weren’t ashamed to give second-hand presents.

Another thing that I remember was when I was about 17 and got the studio with Fred Kelly, before I’d always lived at home and mother and dad controlled everything. I brought the cheques home for the comics and turned it over to my mother and she put them into and account for me… I never saw any of that.

So I got the studio with Fred, and Fred was four or five years older than me, so he was eligible for the draft but he had a bad leg and was “4F”. I didn’t turn 18 until a few months after the war ended.

We only had the studio for one or two years and one of the Christmases (maybe it was the only Christmas in the studio) Fred brought over a few of his army buddies. I’d never really met guys in the army before and they wanted to play poker and I’d never played poker before but they were going to teach me how. Fred, of course, was very encouraging. I had a great time. I enjoyed playing… but I lost… and I lost pretty badly… and I owed them forty bucks… which I paid them, but it took away all my Christmas money. I hadn’t bought Christmas presents for my mother and dad yet.

When they left, Fred was a little sheepish about the whole thing and said that he was sorry about what happened. I said, “That’s OK, I’ll know the next time I play poker and I’ll be a little bit more careful. But the only thing is that I’m broke now and I’ve still got to get presents for my parents.” So Fred leant me twenty bucks or something and I paid him back later. The bottom line was that I was glad to support the army in any way I could.

Taking some time off for the holidays… look for the next post on January 8.

Here’s  to a Whites Christmas and a Happy New Year and to finding an unopened case of Maple Leaf file copies in a dusty old Vancouver warehouse.