Every week Comic Book Daily asks the question and the crew (and special guests) give their answers; we’ll be doing this for 52 weeks. Tip of the hat goes to the gang at Scans Daily for the inspiration.  This week a great interview composition from Don Heck contained this quote:

With the Avengers, the whole purpose of having those guys together in the first place was to see what they’d do together, and if you put too many of them in there, then you’ll never even get a chance to see them do anything with each other; there isn’t the room . Every character gets half a panel every issue. 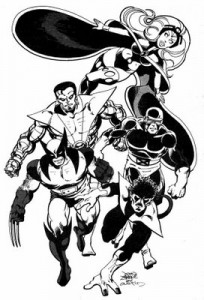 Sometimes. If the writer is good at juggling character and the artist can handle crowd shots. Examples that come to mind are obviously the best: Claremont/Byrne on X-Men, Lee/Kirby and Byrne on FF, Wolfman/Perez on New Teen Titans or Busiek/Perez on Avengers.

I think that team books CAN work. However all too often writers have an idea for one character of the team and focus too much that character. It seems like doing a good team book is almost like being a kid and playing with a tonne of action figures and knowing where they all are and what each one is supposed to be doing to help the final goal. 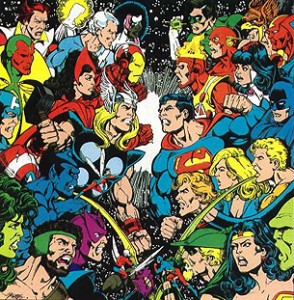 You could just as well ask do ensemble movies/tv shows/plays/books work. And I’d say The Big Chill/MASH/Noises Off/Les Miserables.

With say the Avengers or X-Men, you CAN do that, but when you’ve got the whole team(s) in a big fight scene or something, it can get confusing or messy. I think over the years we’ve seen good and bad runs of team books.

A bigger issue we are seeing now is the teams that grow and grow. How many Avengers are there? Who is an X-Man? And let’s not talk about the Legion… So you split it up into multiple teams, with multiple books, and now you’ve got to try and balance and juggle all of those.

Add in rotating creative teams, and ongoing continuity as opposed to the more episodic nature of MASH or ST:TNG and yes, it can begin to break down.

I’d say team books can work, they have worked, but they may not continue to work if these issues are not handled well. 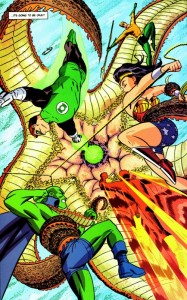 A great example of this now is Batman Incorporated. Batman now relys on his team of “Batmen/Women” to fight crime around the globe. Batman’s vision is carried out by members of his team, who with their own set of skills will be able to accomplish Batman’s mission in their own way. Grant Morrison does a great job on focusing on each members strengths to make a solid storyline.

It is similar with the Avengers and Justice League. Each member has a different personality and skill sets, which depending on the mission, means a different way of completing their mission. It is the goal of the writer and artist to make this read and look good. Some are very successful at the team genre, some do not.

Certain characters thrive in the team environment. Hawkeye and Vision are the two that I think of first. Their best stories are when they are with the Avengers. 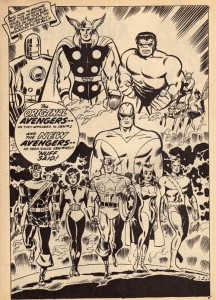 The first comic I ever bought as a kid was The Avengers. The book that got me back in to reading mainstream comics in the last couple years is The Avengers. So I’m gonna say yes. But like any mainstream comic, it’s only if there’s a good creative team behind it. I don’t think it matters if it’s a solo character book or a team book, when you have a lame creative team, the book is lame, when you have a good creative team, the book is good. The format of how many characters in it doesn’t matter. 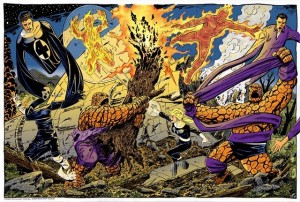 No, team books don’t really work. Team books can be good, but the best team book is never as good as the best solo book. The dilution of focus means that it takes us longer to care about the characters or we have breakout characters that really don’t need the rest of the team. This even happens on television shows (think about Data, River Tam, Jack Bauer). So these “team” books really are about a main character who happens to be on a team, not about the team itself.

You all talk about how you loved the Avengers but really the Avengers has always been a book about Cap, Iron Man, and Thor and whatever losers the current creative team wants to thrown in. It doesn’t matter who is on the team besides those 3. I loved the Busiek/Perez run but Triathlon? Give me a break.Same thing with JLA (although it has more must have heroes) or the Teen Titans (if Grayson isn’t on the team it is balls).

The only true team book is the Fantastic Four. Designed and created to be about 4 heroes from the start, it is the only book where all-stars are given equal billing. 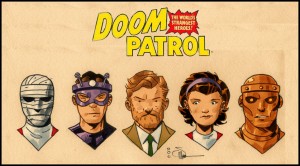 Team books can work, but few do.  When a team book is working there is a focus on developing individual characters and inter-team relationships. The only reason to bring characters together is to see how they react to each other and the situations they’re presented with.

I have to agree with Anthony that the best example of a great team book is The Fantastic Four. Would anyone want to read for any length of time about the individual members? Reed or Susan Richards can’t carry a series, but they can carry a story arc. Spotlight the individuals but also their part of the bigger picture.

It falls apart when they don’t let individuals shine and we get lost in too many characters.  We need to be able to identify with the characters or they’re just one big mob of irrelevance.  DC had it going in the 1950s with Challengers Of The Unknown and Doom Patrol, examples of the sum being greater than the parts.

Of course we’re talking about team comic books so that means lots of big fights, and isn’t that why we’re reading after all? 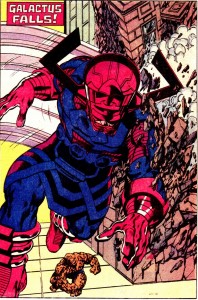