52Q is when we take the opportunity to ask the writers of Comic Book Daily a question.

This week’s question was asked and compiled by Ed Campbell:  Who is your favourite comic book villain?

Leigh Hart: Mine is Ozymandias from Watchmen. He is willing to take the title as villain to (what he believes) help the greater good. His villainy isn’t because he is a bad guy, or because he has a grudge but it is thought through, logical and meaningful.

Andrew Ardizzi: I like the idea of Ozymandias, or the type of antagonist that he is, being the contrasting character. There’s more depth to characters like that compared to ones, either “good” or “evil,” which are a little more straightforward. What’s cool about Ozy is that he’s so cold and stoic with his explanation of why he does what he does, entirely rationalizing his actions which he feels are justified. It’s an amoral subject in his eyes. Here is a man formerly a hero who killed millions to save billions from nuclear catastrophe. Is that, in the end, heroic? Villainous? Or are we in a moral grey area? That’s part of Watchmen’s beauty.

Personally, I’ve always liked the modern incarnation of Sinestro during the Geoff Johns era of Green Lantern. Sure he’s traditionally been just another villain, but especially during the Sinestro Corps War I found him to be very morally ambiguous as an antagonistic character. What I love about him is he believes in the Green Lanterns Corps and the idea of an intergalactic police corps, but he disagrees with the mode through which the Guardians facilitate that policing. So much that he would fight against them, and force the Guardians’ hands to change them from the outside. I’ll never forget the smirk on Sinestro’s face during the Sinestro Corps War when the GLs realized what he had lead them toward once the Guardians authorized their ability to kill. In the same vein as Ozy, Sinestro authored a terror network that killed many, in order to save the GLC from itself, in order to put it in a better place to protect the universe both from the standard crimes and ultimately from the Guardians themselves 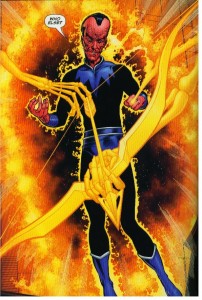 Stanley Jon: I will give two answers to this question.

My two favourite villains to look at are the Joker and Venom.  There two villains just look visually awesome. Artists draw the Joker and Venom with extra zeal and make them look wicked (must be their smile).  I always look forward to seeing different renditions of either character from various artists. 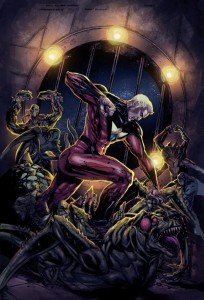 Right now, my favourite villain to read is the Plutonian from Irredeemable by Mark Waid.  The Plutonian is essentially Superman gone bad without any silly allergies towards a space rock.  He uses all his super powers to brutally eliminate all his enemies and makes the world a truly frightening place to live.  What I found really fascinating about the Plutonian is how he changed from being a superhero to a villain.  Yes, there is one pivotal event that made him snap but that is not the sole reason for his change. There was an existing foundation of discontent within him that was built up over time. He tried to save everyone and that became a heavy burden, especially when some people he saved were not very grateful.  Even though he was part of a team of superheroes, he was lonely since he had no real peer who could relate to him.  He also could not get any real peace and quiet since he had “super-hearing” and heard everything that goes on.  All these little things built up inside him and reached a critical mass.  A superhero turning evil is hardly a new concept but this version is done very well because it does not trivialize the origin.

Chris Owen: My favorite villian is the Red Skull. He is a complicated character who not only is a mastermind when it comes to world domination, but he also has a soul. Unlike some cookie cutter villains, the Red Skull actually knows what he is and precisely calculates his moves based on this. In fact, when Captain America had his body full of poison and on the brink of dying, The Red Skull gave him a blood transfusion to save his life! He was the only one that could do it given he also had the Super Soldier Serum as well. Great character bar none.

Walt Durajlija: Conan has always been my favorite fantasy hero. I love the books, I love the comics, and I even love the movies. Perhaps the thing I love most about Conan is the fact that he’s just a guy trying to make it in the world, trying to do good for himself. He’s an opportunist, a survivor but at his core he is an honorable man.

The Conan stories I like most are those that involve sorcery. Conan was brave to the point of stupid at times; he feared no man and often disregarded the odds jumping head first into battle. The thing Conan feared most was magic. Sorcerer’s were Conan’s Achilles Heel, he hated them, feared them!

The greatest of Conan’s sorcerer’s, Thoth-Amon, allowed Conan stories to rise above the bar room brawls and the battlefield carnage (not that I didn’t love those stories as well). Thoth-Amon made Conan face his fears, forced him to flex the muscle he often used least, his brain.

Thoth-Amon’s control over the snake cult of Set made him powerful beyond his abilities as a sorcerer. Cults scare me, the cult of personality scares me, and perhaps this is why I’m drawn to a villain like Thoth-Amon.

Thoth-Amon is a great villain. He appeared in the very 1st Conan story ever published “The Phoenix on the Sword”.

Scott VanderPloeg: For me it’s Paste Pot Pete: a completely terrible villain with a horrible hook (he shoots glue) but endearing in a nostalgic way.

My ultimate villain is Hitler. No, not Vic Hitler from Hill Street Blues, Adolf Hitler. It doesn’t matter how he’s involved in a story it’s guaranteed you’ll hate him. Whether Captain America is punching him in the face or Jason’s anamorphic animals are traveling back in time to shoot him, no one is rooting for Hitler.

Pete DeCourcy:  Comics have a pretty decent track record for really good villains Darkseid, Kingpin, J. Jonah Jameson, Warner Brother’s lawyers, an editor/writer/publisher doing something to a character that someone doesn’t agree with and the Dread Dormammu.

However because I’m a pretentious prick and even though I really just want to say Tao from Sleeper, instead I’ll use Spanish Scott from Stray Bullets. He’s just a thug – maybe a little smarter than most, maybe not. We don’t know enough about him to really glean anything outside of the fact that he’s motivated, but not enough to be a boss.

He’s cold blooded in the sense that he kills effortlessly and it doesn’t bother him. It’s as simple as breathing. 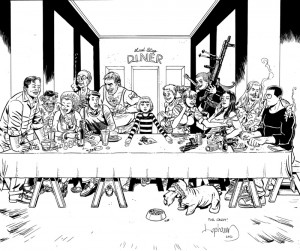 Ed Campbell: Since I thought of doing 52Q again last week, I’ve been thinking about my favourite villain all week.  It has been a tough descision because there are so many great villains out there.  I can also see why we have a favourite villain because on most occasions they make very sporadic appearances.  If our favourite villain was featured in a monthly series, we would tire of them quickly.

For me, my favourite villain has to be the Joker.  It does seem odd that a hero that dresses up like a big bat, has a “jester” as his greatest arch-rival.  But for some crazy reason it works.  The Joker works on so many levels.  He can pull a small caper and can appear in a single issue, or he can be involved in a large story arc where the body count keeps rising.

The Joker is one of those villains who is easily recognizable by anybody.  You could show a picture of Joker to someone who doesn’t know about comics, and they would be able to identify him.  He is a cultural icon.

Now it’s your turn Comic Book Daily readers.  Please use the comment section below and let us know who is your favourite comic book villain?