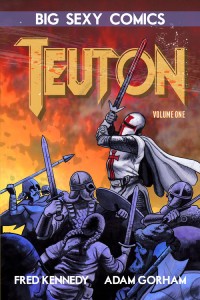 First and foremost this concept needs introduction and context. What is this? Why am I doing this? Both of these are valid questions, and here are your answers.

I love independent comics. It’s a sentiment that’s grown exponentially over the last 18 months since I’ve been with Crystal Fractal Comics and have gradually over time come into contact with a number of Toronto-based comic creators, as well as many across the 905 belt. Beyond the household names, there are handfuls of talented local creators who put their sweat and passion into every piece of scripting, pencilling, inking and colouring work they complete. While it’s a love, an outlet for creativity, it is not cheap. There are artistic costs, printing costs, lettering, let alone the actual time that goes into plotting a story in the first place. And with the return so very small in comparison for most, considering the quality of the work put out, I feel each of those I plan to showcase with this aspect of my returning column are worth noting. Some will be entirely Canadian-created, while some will be anthologies containing the works of Canadian talent. While that measure of Canadian content is constant, what is also unwavering is the quality of each book I’ve collected over the last year.

To begin, last week I chatted with Fearless Fred of 102.1 The Edge fame. But when he’s not live on his show, he’s simply Fred Kennedy, comic book scribe. One of the series Fred and his partner in comic crime Adam Gorham have been putting out is a graphic novel series called “Teuton,” which is a story based on the Northern Crusades within the territorial boundaries of modern day Lithuania.

Teuton follows the main character, Andrus Tamm, as he fights alongside his brothers against the Pagans and their deities before effectively stamping them out and converting them to Christianity. The book is hardly religious mind you, simply using the idea of religion as a backdrop for contextualizing the realities we face as human beings: the world, and naturally the universe, is far more complicated and expansive than we could begin to imagine. And with that, Kennedy bases his story from that reality and melds it with the era’s historical perspective. Tack on some action and solid character development, and Teuton hardly disappoints over its two volumes.

So, what do you get with Fred and Adam’s volumes? Where the story is concerned, you get a well-researched, tight story with solid plot development as we follow Andrus’ journey amid the watchful eyes of his Pagan captors as they search for a mystical weapon that may very well dictate the balance of power across the land. The story is ripe with action, double crosses, and violence. That violent aspect of the story is brought to life by Gorham whose black and white artwork is ever improving, and remarkably so between volume one and two. Together their efforts have created an ever evolving comic work that continues to get better. What I liked personally about the books was that Andrus’ arc is hardly heroic and is founded in an amoral reality from the reader’s perspective, yet is very much rooted in the righteous subjectivity of man’s self-importance. That aspect of the story truly defines its tone, complemented by the ensemble of friends, enemies and gods that surround him.

With volume three, the final piece of the Teuton trilogy, coming out later this year, the Toronto-based tandem’s epic promises much of the same as the first two volumes. So if action, violence, gods, intrigue, fights and maybe a little love are your comic book pleasures, check out volumes one and two of Teuton. And if you happen to like twists, then volume three should offer a little bit of the same and much more. Definitely look out for it at Fan Expo in August, but in the meantime you can get both 100+ page books online (volume 1 and volume 2) for $10.