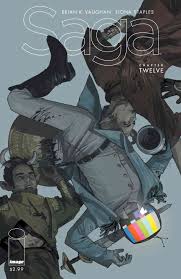 DATELINE: NEW YORK– Wednesday, Image Comics announced that Brian K. Vaughn’s comic SAGA, issue #12 WOULD be available for purchase in iOS apps. There had been reports that the issue would be banned due to fears over what Vaughn called: “two postage stamp-sized images of gay sex”. This apparently was not the case. In a related story, thousands of consumers are showing up at local ER’s requesting treatment for fingers sprained by hitting screens repeatedly trying to get Kindles to enlarge. 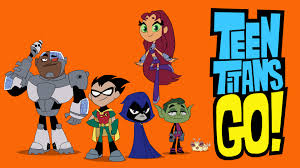 DATELINE: CARTOON NETWORK–  The theme song for the returning animated series TEEN TITANS GO  has been rolled out. When the show returns in two weeks a new version of the song, done by “Mix Master Mike”, will blast through your speakers. This reporter has also learned that the lyrics are different as well. Here’s a transcript:

WITH GIGANTIC HEADS ALL OUT OF PROPORTION!

THERE’S A LOT OF THINGS THAT ARE NOT THE SAME SIZE.

THEY’VE GOT  ANIME FACES…BUT CAN I BE FRANK?

THEY DO HAVE TARA STRONG. SHE’S THE NEW MEL BLANC.

SO YOU MIGHT AS WELL SIT BACK AND ENJOY THE SHOW,