This month we feature the beginnings of the most popular new super-hero of the Silver age of comics The Amazing Spider-Man. I can say that just about as brashly as Stan Lee did calling The Fantastic Four The World’s Greatest Comic Magazine. Over a fifty year plus time frame Spider-Man has become Marvel’s most popular character overall. There are plenty of other terrific characters in the Marvel stable of heroes, but it would be pretty hard to find one with more universal appeal than Spidey.

My first introduction to Spider-Man occurred in 1966 when the character was only about four years old. The very first Spider-Man comic book I read was a well-loved second-hand copy of Amazing Spider-Man #21 from the Galt Book Exchange. The Spider-Man/Human Torch team-up against the Beetle. Many other early Ditko Spider-Man books followed and I was hooked. When I first started buying new copies of Spider-Man he was at issue #45 and I never looked back. I wasn’t a collector back then: I would read the books and then passed them on or traded with friends. In my early 20’s I started reading and collecting again, and I guess you could say I have been ever since.

Spider-Man connected with many readers, young and older kids when he was first introduced. The fact he was a teenage super-hero and not some adults sidekick was a big part of the appeal. He came fully equipped with all of the teenage angst from school to girls. He had real problems at home. He made mistakes – some of them big. Many kids identified with him. And of course he also had a very cool costume and powers to boot.

Stan Lee and Steve Ditko did most of the work getting Spider-Man off the ground and laying out the blueprint for the character that other artists and writers have followed (more or less) over the past fifty-five years of Spidey’s existence. Let’s take a quick look at those early Spider-Man appearances. We are starting with issue #1 today; for Spider-Man’s first appearance check-out Dennis De Pues’ last post on Tales from the Comicdenn, which features the original artwork from Amazing Fantasy #15. Thanks for the segue Dennis! 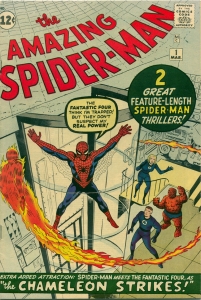 Eight months after the first appearance of the Amazing Spider-Man in Amazing Fantasy #15 (August 1962) the first issue of Amazing Spider-Man #1 hit the comic book spinner rack. Stan Lee took no chances with his first Spider-Man issue having his number one star attraction the Fantastic Four splashed all over the front cover. This book has two stories; let’s take a look at each one

Peter Parker has the fantastic powers of Spider-Man but failed to use them to prevent a crime and this lead to the death of his Uncle Ben. This is in the beginning of ASM #1 and it would a re-occurring theme throughout many early Spider-Man comics. Uncle Ben’s death also puts the remaining family in a cash crunch. Jonah Jamieson owner of the Daily Bugle newspaper has a fanatical persecution of Spider-Man and this also begins here. Finally, Peter Parker is shown to be an unpopular bookworm at school and is ostracized by his classmates. Spider-Man does yeoman work saving astronaut John Jamieson (Jonah’s son) but he still feels the wrath of J.J. Jamieson in the paper. Leaving Peter to wonder about his future as Spider-Man.

Part 2 “Spider-Man vs The Chameleon!”

In his search for some much-needed money, Peter Parker believes he has come up with the perfect job. He’ll join the Fantastic Four. Easier said than done. Once Spider-Man meets the Fantastic Four at the Baxter building a misunderstanding and skirmish takes place. This impromptu type of meetings between super-heroes became a Marvel trademark over time and were very popular amongst fans, as it let you see how your favourite character stacked up against other heroes. Spider-man is told by the Fantastic Four they aren’t accepting jobs and are a non-profit group, and he leaves in a huff.

Amazing Spider-Man #1 is still one of the most sought-after books in comics. 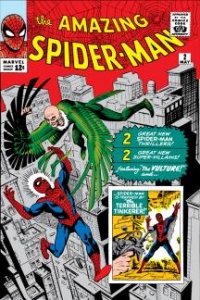 The second and last two-story Spider-Man arrives on stands two months after #1, as Spidey starts out on a bi-monthly schedule. This book features two new villains for Spider-Man, both of whom will appear in the next Spider-Man movie – Homecoming.

Part 1 “Duel to the Death with the Vulture!”

Spider-Man has his first battle with the Vulture (Adrian Toomes). The Vulture when we first meet him is an old bank robber with wings. That of course is selling him a bit short. His flying suit is a work of genius and very powerful. Although he looks ancient he does become a long-time foe of Spider-Man and is an original member of the Sinister Six. This issue has a two bout battle with Spider-Man coming out on top in the battle that counts the most – the last one. This story also details the start of Peter Parker’s photo job with the Daily Bugle, and the much needed money it brings into the Parker home. The Vulture returns in Amazing Spider-Man #7.

Part 2 “The Uncanny Threat of the Terrible Tinkerer!”

Peter Parker gets a chance to work with some of the scientists at school in the research department. His first job is to pick-up some science equipment for one of the professors. We meet The Tinkerer (Phineas Mason) who looks older than the Vulture. We also meet some little green men who are aliens from another world spying on earth. Spider-Man gets involved and breaks up the Tinkerer and alien’s plans. The Tinkerer turns into a long term pain in the butt for Spider-Man, as a supplier to the underworld of weapons and gadgets. He did help design Mysterio’s costume so I have to like him a bit for that. He next appears as Phineas Mason in Amazing Spider-Man #159. 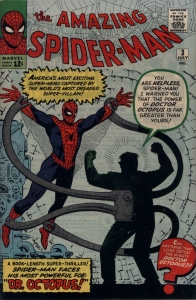 In our first full-length comic, we meet one of Spider-Man’s two greatest foes Doctor Octopus. Dock Ock and the Green Goblin (Amazing Spider-Man #14) have both played havoc with Spider-Man’s life since their introduction. They are different from many of Spidey’s early foes who are mostly in the bad guy business for the money. These two have world conquest type visions in their minds and dream big. They are interchangeable 1A and 1B on my list of Spider-Man’s most dangerous villains, and at the top of his rogue’s gallery.

This issue features Doctor Octopus’s origin, a battle between Spider-Man and Dock Ock where the latter wins and soundly beats Spider-Man. So much so he is afraid to fight him again. Johnny Storm (alias the Human Torch) gives the kids at school and Peter Parker a pep talk telling them to battle thru their defeats. Peter takes this to heart and forms a plan to tackle Doctor Octopus once again. The now power mad Doctor is found and a protracted battle ensues with Spider-Man coming out on top. Later Spider-Man thanks a puzzled Human Torch for the pep talk. This is the second appearance of the Human Torch in three issues of Amazing Spider-Man, and Spider-Man is also returning the favour appearing in Strange Tales Annual #2 this same month. The pairing of the two teens worked well and was used often in the early days of Marvel’s resurgence into superhero comics. Doctor Octopus returns to the pages of Amazing Spider-Man in his first two-part story in issues #11 & 12. He later forms the super-bad team the Sinister Six and leads this team for years. 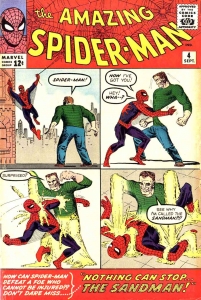 Amazing Spider-Man #4
September 1963
“Nothing Can Stop the Sandman!”

Another issue, another great new villain. This issue the Sandman. The Sandman is only in the Amazing Spider-Man title for short period of time before crossing over to the Fantastic Four as a member of the Frightful Four and later as a Hulk antagonist. I always liked this character. This is another of those strictly for the money type villains.

Our story features the Sandman ‘s origin, another two-bout battle with Spider-Man, losing the second battle to Spider-Man and a vacuum cleaner. The problems with his classmates Flash Thompson and Liz Allen continue, as does J.J. Jamieson’s neurotic campaign against Spider-Man. The Sandman next appears in the Amazing Spider-Man in issue #18 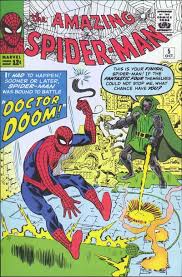 We start with a quick update from Doctor Doom and his recent defeat/escape from the Fantastic Four. Doctor Doom is looking for a partner to use, and he tracks down Spider-Man. He makes his pitch but Spider-Man is having none of it. Spider-Man escapes from Doom’s clutches; however, the dear doctor still has plans for our hero. We switch scenes to Flash Thompson who is dressed in a Spider-Man costume. The gang of students from school are planning on playing a practical joke on Peter Parker. As the joke is unfolding Doctor doom appears and captures the Flash Thompson Spider-Man. Doctor Doom uses young Flash as ransom. The real Spider-Man and later the Fantastic Four eventually rescue Flash who becomes a celebrity at school after his ordeal. Much to the chagrin of Peter Parker. 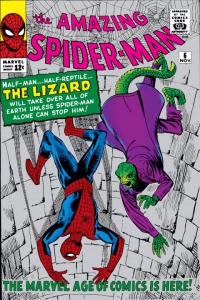 Our final issue of our post today features the first appearance of a long-time villain and friend The Lizard Alias Doctor Curt Connors. The Lizard is a throw back to a Jekyll and Hyde type villain, a likeable scientist who changes back and forth after an accident in his lab.

Our issue today begins with Spider-man reading about a Lizard Man in the Everglades. We quickly change scenes to a museum where Liz Allen, Flash Thompson, Peter Parker and school kids are on a trip. Two thieves get cornered and take Liz Allen as hostage. Spider-Man swoops in and saves Liz, leaving her smitten with Spider-Man and Flash Thompson on the outside much to his chagrin.

The main event however is in the Everglades as J. Jonah Jameson wants the scoop on the Lizard. Peter Parker convinces JJ to take him along to for pictures. Once their Peter switches to Spider-Man and soon finds Doctor Curt Connors distraught family. There is a brief origin of the Lizard and an antidote is quickly made from Connors notes to change him back. That is the easy part. Getting it into a powerful Lizard is something else and Spider-Man has a big-time battle before he accomplishes the task. Once cured Doc Connors vows to never play with the formula again and Spidey has a friend for life. We see Curt Connors again in Amazing Spider-Man #32/33 and the Lizard returns in issues #44 and 45. Back home Liz is still pining for Spider-Man… 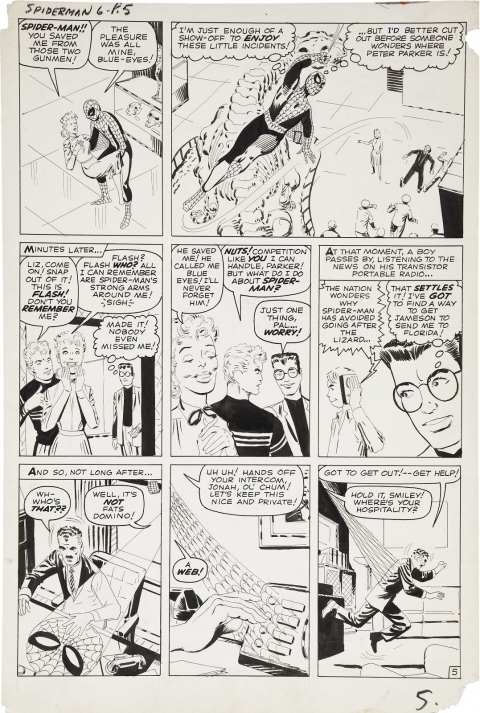 This “first six” was a wonderful start for the character. Amazing Spider-Man passed the Fantastic Four in sales in the calendar year of 1967 and never looked back. I just wish I had purchased these books on the cheap when I had the chance. They are not cheap now as you can see by the prices listed below.

The 46th Overstreet Price Guide prices are listed below.

Have a great Canada day everyone!