This month’s Arcs & Runs looks at a famous Spider-Man versus Doctor Octopus story that ranks amongst Spidey’s best. This fan favourite has been on my “to do” list for some time. It has been covered already in part by CBD writers Peter Chin (Why Comics Rule) and in Walt’s Undervalued Spotlight #276. Time to give the books the full Arcs & Runs treatment.

I have always preferred the John Romita version of Spider-Man over Steve Ditko version. As a child and later a teenager I couldn’t stand the Ditko version once John Romita entered the scene. As time has passed I have grown to appreciate the Ditko work. I think the story in amazing Spider-Man #31-33 was a real reflection of how he thought of Peter Parker and Spider-Man should be as a young man and super-hero. It is powerful work and Steve Ditko richly deserves all of the accolades he has received for it. Stan Lee also wrote a pretty good story here too! Let’s get to the books! 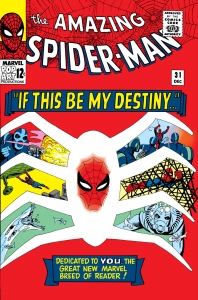 Amazing Spider-Man #31
If this be my destiny!

This issue begins with Spider-Man taking on a gang of bad guys dressed in purple at an atomic devices plant. Spider-Man is getting the upper hand when one of the gang members contacts their leader the “Master Planner” who instructs them to use emergency Plan G to foil Spider-Man. They do and with some effort manage to escape and make it back to the unseen Master Planner’s lair. We switch scenes to the Parker home and Peter is leaving to enrol at Empire State University, unaware that his Aunt May is very sick. When Peter returns after a long day at E.S.U. Aunt May collapses and Doc Bromwell is called in. He sends Aunt May to the hospital to be treated there. Pete is feeling pretty bad about aunt May and this carries over into school the next day. We meet Harry Osborn (2nd Green goblin), Gwen Stacey (Spider-Gwen), and old Flash Thompson (later Venom) is on hand as well. The pre-occupied Mr. Parker seemingly gives the new gang the “freeze” and his social life picks up where he left it in high school – all bad. He is out as Spider-Man that night looking to get pictures for the Daily Bugle and cash to pay bills but strikes out. School the next day is a swing and miss as well. We do get to meet Professor Miles Warren who one day would become a deadly enemy of Spider-Man known as the Jackal. It also appears as if Gwen Stacey has an interest in Peter as well. Peter is back at the Spider-Man bit that evening and with a tip from Patch (alias Frederick Foswell) he finds those purple guys back robbing a ship this time. Spider-Man foils this robbery attempt much to the chagrin of the Master Planner who has apparently tackled Spider-Man in the past. No pictures for Peter and worse, doctors at the hospital have the test results on Aunt May and they fear she is done for as this issue comes to a close. No wonder I never read about Doctor Octopus he isn’t seen in this book either! I think I am the only person on the planet I know who likes the cover of this book. The splash page in this book is used on the cover of Marvel Tales #24 and reprints this story. 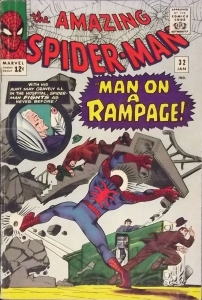 Amazing Spider-Man #32
Man on a rampage

Part two of our story begins at the hideout of the Master Planner who turns out to be Doctor Octopus. That was a quick reveal!  Doctor Octopus is on the hunt for more atomic radiation material and has his purple goons on the lookout for it. We switch scenes to the Daily Bugle where Peter is trying to sell J. Jonah Jameson some weak pictures in an attempt to get some much needed cash. Betty Brant is also trying to corner Peter. She has received a marriage proposal from reporter Ned Leeds (later the Hobgoblin) and wants to talk to Peter about it. Peter knows he and Betty have no future so he puts on and act and tells her to get lost. Jameson is a strike-out as well and he leaves the Bugle far worse than when he arrived. It gets even worse at the hospital. Peter finds out a radioactive particle in Aunt Mays blood stream is the cause of her illness, which may prove fatal if they can’t remove it. On top of that, the radioactive particle probably came from Peter when he donated blood for a transfusion with his Aunt. Racked with guilt Peter goes nuts, smashing furniture when he remembers Doctor Curt Connors (aka The Lizard) and his work with radioactive blood formulas. Spider-Man finds Doc Connors and he orders a special formula ISO-36 from the west coast to try and help Spider-Man’s “friend”. Enroute the Master-Planners men hear of the formula and steal it for the Master-Planner. Spider-Man goes crazy trying to find the Master-Planners hide-out, all the while we the reader are getting grim reports from the doctors at the hospital, and Doctor Connors.  Finally, Spider-Man breaks through and finds the hide-out. The problem is Doctor Octopus has a trap waiting for him with the ISO-36 as the bait. A fierce desperate battle ensues and in the course of the fight a main support beam gives way and the building crashes down on top of the two combatants. Spider-Man is trapped under tonnes of metal as this issue comes to a foreboding end. I always felt this issue was a bit underrated in this trilogy. 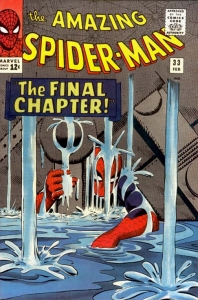 We finish our three issue story with a terrific book starting with a wonderful Steve Ditko cover, one of his best if not the best of his entire run of Spider-Man. Spider-Man is trapped under tonnes of machinery and the much needed ISO-36 formula is right in front of him. He fights and strains to find the strength he needs to free himself and save his aunt. Deep down somehow he finds the will and strength he never knew he had to break free. It takes the first seven pages of this book to accomplish the herculean task, including a great splash page on page four. Next four more pages of fighting his way through the Master-Planner/Doctor Octopus gang of goons. He finally makes his way to Doc Connors who works on the serum and then gives it to Spider-Man to take to the hospital. The doctors administer the serum to Aunt May. It will take a couple of hours for them to know the results. Spider-Man returns to the Master Planners hideout and takes pictures of the defeated goons. He calls Frederick Foswell and gives him the scoop on Doctor Octopus and the Master Planner gang. Next at the Daily Bugle a beat-up Peter Parker arrives and Betty Brant sees him. She still loves Peter but can’t stand to see him this way. Deep down they both know their relationship is over. Next on to J.Jonah where Peter plays hardball with his dynamite pics and gets the money he needs to pay all the bills (for now). On to the hospital where we get the happy news and ending this story deserves – Aunt May is going to be OK. Peter leaves the hospital to go home and get some much needed rest as our story comes to a satisfying end.

We don’t see Doctor Octopus in this issue either and he doesn’t come back until Amazing Spider-Man issue #53, and that is the beginning of another story that will be an Arc & Run feature sometime in the future! Listed below are the Overstreet prices for our three books covered today.

P.S. As you may have noticed in this write-up, if you wanted to have some sort of super-being life, just knowing Peter Parker was a big help in that regard! See you next month!