The first time I ever saw the Silver Surfer was on a slightly used copy of Fantastic Four #55 from the old long gone Galt Book Exchange, which I happily traded in for with four copies of Ripley’s Believe It or Not . I was hooked. The FF was only at #59 at the newsstand and I quickly tracked down his recent appearances, although #48 and #49 were difficult to find and in tough condition at used book stores even away back then. Your friends wouldn’t trade with you either. If they had the books they kept them! I continued to buy up his FF appearances and the Tales to Astonish cross-over in issues 92 (partial) & 93 (full) which were immensely popular. Two years in to my collecting of the Surfer it was announced he was getting his own book! The first one was going to be a double –sized $0.25 center! This excitement wasn’t just me, there was an enormous built in audience for the Surfer.

A little more than two years after the first book hit the stands it was part of a Marvel wave of cancellations due to poor sales (Nick Fury, Doctor Strange, and The Silver Surfer) and suspensions (X-Men & Captain Marvel) and it was gone. I can’t say I was that sorry to see him go. What happened? There are a gazillion reasons and theories why the Surfer failed in his first solo effort. I will list some of my own reasons I thought the book failed and then we will take a look at the high’s and lows of the run itself. For anybody who thinks this run is not a failure I say this – when you are cancelled and the Sub-Mariner continues you have done something wrong.

1. My number #1 pet peeve with the book was the Surfer’s non-stop chronic moaning about his own predicament and the mad state of humankind. I was so sick of it by the end of the 10th issue I wanted to cut a hole in the atmosphere and let the guy out myself. This I leave at the feet of Stan Lee. He has used this self-pity but I’ll do the right thing anyway device often in the past with The Thing and Spider-Man to excess, with the Silver Surfer he turned it in to an art form.

2. The first seven issues were double size and bi-monthly. This would have been OK if the books were all great, but they weren’t. For me it really began to fall apart at issue #8 and by the time it reached issue # 10 -13 the book was D.O.A. Even stories with Spider-Man and the Human Torch couldn’t save it. I know a few of my friends that got off the bus after issue #5.

3. It never felt like the book had a sense of direction (for me at least). The love of the Surfer’s life, Shalla Ba, was on another planet and he couldn’t go there. What else? Mephisto trying to steal the Surfer’s soul; well, you can only successfully do that once. I had thought Mephisto would become to the Surfer the way Loki is to Thor, a life long antagonist who never really gets what he wants. They needed a bigger playing field and a supporting cast.

On to the Silver Surfer run itself. All of the issues in this run are written by Stan Lee and he has his high and low points throughout the series. The art, which is second to none, is by John Buscema in all interiors except the final book (#18), which has Herb Trimpe and Jack Kirby art. Marie Severin (#15), Barry Smith (#17), and Herb Trimpe (#18) contribute cover art as well. I will cover highlights of the run below.

The Origin of the Silver Surfer

I am usually the first person to get excited about an origin issue but I must say I was a tad disappointed with this issue. It is not because it is written poorly and the story itself is not bad. The art is fantastic. It is because at the time I expected a much more alien type origin. Everyone in the book looks and sounds human. Shalla Ba is gorgeous we do understand the sacrifice Norrin Radd is making for himself and the planet. I expect on earth you would find thousands of people who would do the same thing in the same circumstances. The Watcher presents are re-worked stories from old Marvel horror titles and are good fill-ins in a back –up role for the book. An OK start to the run. If I was writing a column about books that are overvalued by Overstreet this book would be very high on the list.

The Power and the Prize

This is my second favourite issue of the run and introduces Mephisto to the Silver Surfer. Dennis De Pues wrote an excellent article on this issue and the art of John Buscema in Tales from the Comicdenn on Oct.30, 2013. Please check it out for more of the many virtues of this great book. Walter Durajlija also wrote a piece about how undervalued this book is to Silver Surfer #4 (sorry can’t find it Walt). I think it needs a UV spotlight. Silver Surfer #1 is nowhere near the book this one is, but of course this is a #3 (groan). 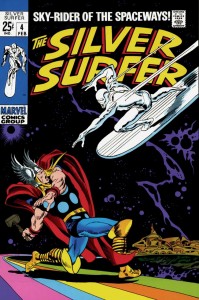 The Good, The Bad, and the Uncanny

The highlight of the run for me and I suspect countless other Silver Surfer fans. For all of the things that went wrong with this run of books, this book goes along way to atoning for it. This has to be John Buscema and Stan Lee’s best work together. The art is stunning and the story sound.

The Silver Surfer has been duped by the master of the dupe – Loki – into believing that Thor and Asgard pose a mortal threat to earth. A long well matched battle between Thor and the Silver Surfer takes place before the Surfer realizes he has been had and the battle ceases. There is more but we will leave it at that. It is an expensive book to own now but worth every nickel. This book will stand the test of time.

Sadly the run goes downhill from here, picking up steam at issue #8 and is like a downhill rocket when it gets to #13. They bring in Spider-Man for issue #14 and the Human Torch #15 and the Surfer runs afoul with both of them! Done! The only thing left to do is bail out and they do in our final issue #18. 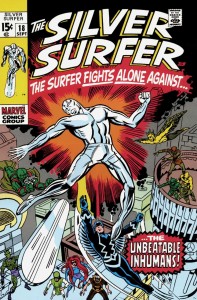 To Smash the Inhumans

In what turns out to be the last issue of the run, we have Jack Kirby pencilling two of his favourite creations The Silver Surfer and the Inhumans. This had to be a pretty emotional time for Mr. Kirby. He was leaving Marvel and for all he knew he would be drawing these characters for the very last time in a comic book. It always made this book a little special to me. The story doesn’t really matter as part two never happens and we don’t get issue #19 and the new Savage Silver Surfer. I for one am glad the story never took place.

I have to admit it is a little more difficult to write a negative piece about characters you like than positive ones. I think I will avoid them in the future!

Going bi-monthly for the summer at least so see you in two weeks!