We have featured many arcs in the last little while so I thought this week we’d take a look at a run. This run features Spider-Man outside of the regular continuity of the Marvel universe and in a joint venture the Electric Company. The Electric Company is the name of a PBS (US Public broadcasting) children’s TV show. It used live action skits featuring Spider-Man and Electric company characters, Easy Reader, Detective Fargo North, Jennifer of the Jungle, and a cast of kids to challenge evil doers like Blowhard, The Prankster, and the Blue Beetle. 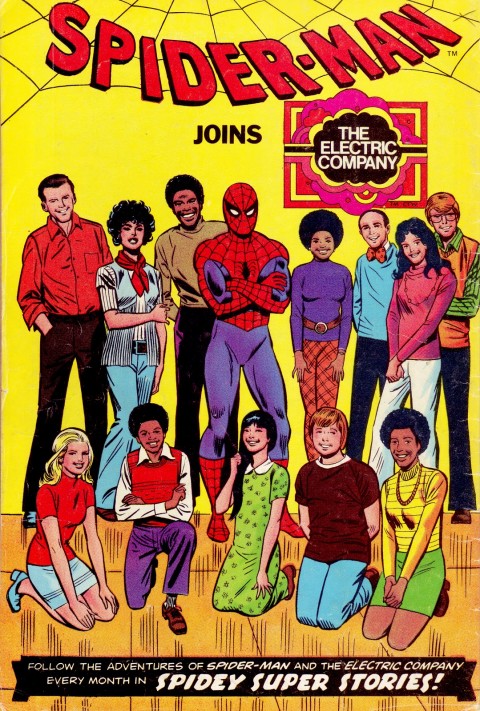 Marvel jumped into this new venture with both feet. Spider-Man’s regular artist John Romita was featured on 36 covers in the run and the ones that weren’t “ghosted” his style closely. Well, Kirby probably didn’t ghost (#19-20). Winslow Mortimer (pencils) and Mike Esposito (inking) did the interior artwork in almost all of the books.

The writing chores were distributed amongst a number of writers. The initial writer was Jean Thomas who was married to legendary writer and editor and chief of Marvel – Roy Thomas. More importantly she also wrote Walt’s favourite, Night Nurse (See Undervalued spotlight #147). Jim Salicrup and David Anthony Kraft were also key writers on the books. 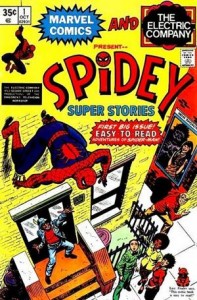 The content and make up of Spidey Super Stories looked a lot like a Marvel Team-Up for kids. In most of the stories Spider-Man was teamed with another Marvel super-hero to tackle a Marvel villain. There was a mix of Electric company support characters from the TV show like Easy Reader, Fargo North, Jennifer of the Jungle, and Paul the Gorilla. The Marvel support group included Mary Jane Watson, Aunt May, Robbie Robertson, and J.J. Jameson. There is a long line of villains with Doctor Octopus, The Kingpin, The Green Goblin, and Doctor Doom leading the way. There is also a huge cast Marvel Super-heroes from Kid Colt to the Silver Surfer.

The most notable and noticeable part of these books in terms of content for me was the very equal use of women in the stories, and use of its super-heroines. The Cat, Ms.Marvel, Medusa, She-Hulk, Spider-Woman, Tigra, Storm, Shanna, the Invisible girl, and Jennifer of the Jungle all make significant contributions to the books. Women’s equality and rights were also highlighted. Kid’s issues and Race equality were also in focus.

The targeted age group for these books at the time was 6-10 years of age. I think there are quite a few 5 year olds today who could read these books. The books were really positive in nature and best of all they had no ads. I’m not sure I could recommend these books enough for young readers – they are top shelf with a good message.

My first introduction to Spidey Super Stories took place in 1976 on a babysitting job with a girl I had just started to date. Her older sister had a young son named Brian and was a single parent. She was going to a party and her sisters (and I) were going to watch Brian for her. I was sitting down on a chair when I noticed a familiar red and blue costume on the floor beside the couch. It was a Spider-Man comic on top of a stack of other books guarded by two enormous dust bunnies. Freeing Spidey from the dust I looked at the book. Spidey Super Stories #7 with an old Spidey foe the Lizard. Now up to this point young Brian had been a pretty quiet little guy but he sprang to life when he saw me looking at the book and wanted us to read it, with this one being a particular favourite. Brian was only about five or six years old but did read very well. He was proud as a peacock of his reading ability and I helped embellish the story with running commentary. We both had a really good time (better than I did with his aunt!). It was clear that this book had hit the mark in terms of getting him to read and he loved Spider-Man. I picked him up another book at the store #18 with the Kingpin but that was the last I seen or heard from them. They moved back to Toronto that fall and we lost touch. I’ll bet Brian still loves Spider-Man. 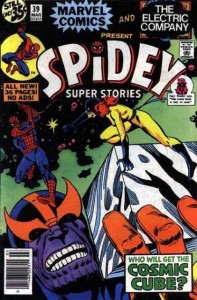 When I got back into comics in a big way a few years later Spidey Super Stories were coming to the end of their run. Back issue books were around, usually pretty beat up but I picked them up and some new ones as well for my nephews. In short order they all looked the same. They were well read and well loved comics. I can thank my chance encounter with young Brian and his Spidey Super Stories comic for helping to create this new batch of memories.

In terms of the collector crowd today I would think their would be a fairly significant number of people who would look back at these books with a great deal of reverence. High grade copies might be hard to find given the young audience for which these books were intended. In addition the outside back cover had a stamp to cut out and I have found copies with it missing. The 44th Overstreet Price guide for these books is listed below and as you can see most of the books are still very affordable. Even the cool #39 Thanos cover.

And finally for a good laugh I have attached a YouTube video of a skit from the original Electric company TV series featuring Spidey and his gang. There are many more on YouTube to view and enjoy. I wonder if the Electric Company crew had any idea at the time they were working with a future Hollywood icon in Morgan Freeman. We all get our start somewhere!