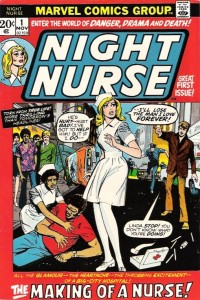 Back in 1972 Marvel Editor Roy Thomas made some very bold (for that industry, at that time) moves. He launched 3 new titles all starring female characters. The story goes that Stan Lee was looking for a way to increase female readership and while girls were traditionally reading romance comics in those days the idea was that if girls were given strong heroic female characters they’d buy them. Roy Thomas one upped Mr. Lee by deciding these new comics should have female creators.

In late 1972 Marvel launched, Night Nurse, written by Jean Thomas (Roy’s wife at the time), Shanna the She-Devil, co-written by Carole Seuling and The Cat, written by Linda Fite with pencils by Maria Severin. This indeed was a great idea and while none of these titles survived past the 5th issue (Shanna made it to #5 while Night Nurse and The Cat stopped at #4) I do think Marvel knew they were headed in the right direction. Just 3 short years later they were starting to do wonders with female heroes in their re-launched X-Men team.

Of these 3 titles launched in late 1972 Night Nurse was the most radical and I believe the most important. Marvel attempted something new with Night Nurse; they went for strong heroic characters that had no super powers. Traditionally this title should have been relegated to the Romance Comics genre that Marvel was still publishing back then (My Love, Our Love Story) but Thomas instead tried something new.

Night Nurse #1, drawn by veteran Win Mortimer, revolves around the adventures of three female roommates who worked the night shift as nurses at a New York City hospital. Linda Carter, Georgia Jenkins, and Christine Palmer are all student nurses as the story begins. There is a lot happening. Linda Carter’s love interest Marshall Michaels asks Linda Carter to marry him but insists that she give up on being a nurse. And then, when the city’s power goes out Ben Jenkins (Georgia’s brother) and his buddy Rocky try to hold the hospital’s generator hostage. Georgia convinces her brother Ben to do the right thing but Ben is shot as he tries to stop Rocky. Ben ends up doing time for this anyway highlighting the social injustices African-Americans were dealing with. In the most important scene in the comic Linda turns down Marshall’s proposal and becomes a nurse (both these scenes are depicted on the Win Mortimer cover). Here were stories of female characters persevering in situations of danger, dealing with social issues and personal issues.

Yet Night Nurse did not sell!

I for one think the book needed a quicker move into Marvel continuity. Perhaps had issue #3 seen Peter Parker come into the hospital with unexplained wounds of perhaps the wounded started coming in after a mêlée involving the Avengers things would have been different.

Still Night Nurse was now an official Marvel character albeit one waiting to be re-discovered. She was rediscovered; Brian Michael Bendis brought her back during his now famous Daredevil run (#58, Nov 2004). I was reading Daredevil at the time and remember seeing Night Nurse and thinking “how flippin cool is this”! It was really cool and it’s been cool ever since. Night Nurse has been a regular in the modern continuity, she’s appeared in the New Avengers, it was in New Avengers #34 that Bendis confirmed this is the same Night Nurse as the one in the 1970s. She took Cap’s side in Civil War and had a Role in Doc Strange’s The Oath storyline. She’s a great supporting character that I think could carry a few stories on her own. She’s a character rooted in reality and that bodes well for the type of storytelling popular today.

Night Nurse should be making some great cameo appearances in a number of Marvel movies, shouldn’t she?

I noticed this little quip on the grand comics database regarding whether our Linda Carter is the same Linda Carter that starred in the Marvel/Atlas title that was being published back in the early 1960s;

This appears to be a different Linda Carter then the one featured in Linda Carter, Student Nurse (Marvel, 1961 series). The 1961 Linda Carter did not have Georgia Jenkins and Christine Palmer as roommates, and there are no similarities between the characters besides nursing.

Adding roommates is irrelevant and updating the character was a necessity considering how much American society had changed from 1962 to 1972 (I don’t think a greater change has occurred in any other 10 year period).

She is one in the same as far as I’m concerned. In Night Nurse #1 she is introduced as Linda Carter, Student Nurse. The only difference being she is a brunette originally and a Blonde in Night Nurse #1. When Bendis brought her back she was again a brunette.

Night Nurse #1 has been making some solid gains recently; the comic has appreciated at a 9% rate over the last 3 Overstreet Price Guides. This is a tough book to gauge on the back issue market because not many trade hands. High grade copies of The Cat are 3 times as common and high grade Shanna’s are almost 4 times as common, this is indeed a tough book in high grade.

Very sporadic trading shows CGC 9.2 copies getting just below guide while CGC 9.6 copies don’t quite get double guide. Id’s say try and snag a crisp looking CGC 9.4   in the low $300s. I think it’s a great book to keep in the portfolio.