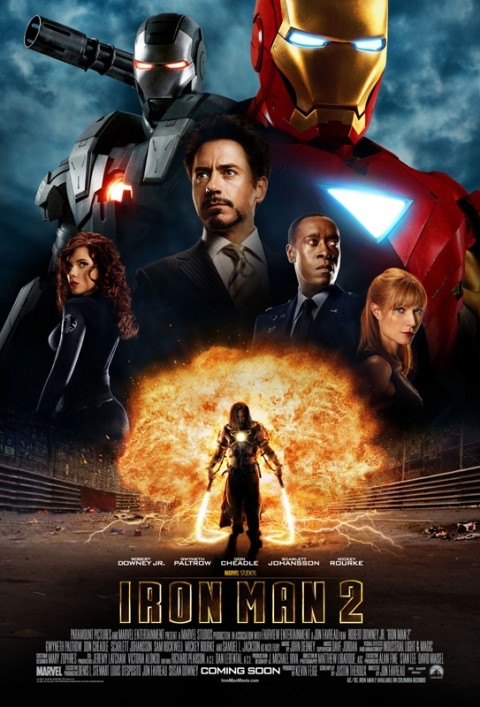 In preparation for the Avengers movie CBD is taking at look back at the films that led to this monumental cinematic occasion. This week the Road To The Avengers suits up for Iron Man 2.

Anthony: Another very strong ensemble cast really sells this movie and makes it a great action feature even for those unfamiliar with the characters or even the first movie. Mickey Rourke is very entertaining as Whiplash, but I am almost positive that he just brought that bird on set and refused to do the movie without it. This necessitated writing it into the script.

Leigh: I can definitely see Rourke pulling something like that. This movie was right after he came out of rehab….wait…didn’t I say this in a previous post. Oh yes, I remember! It was about Robert Downey Junior! They are really enjoying kick starting old drug addicts’ careers. Good for them!

Anthony: The movie continues a lot of the story threads first mentioned in Iron Man: possible romance with Pepper, Rodney getting to be War Machine (sorry Terrence), Tony Stark’s alcoholism, and the Avengers Initiative.

Leigh: I felt like this movie was a big Avengers advertisement. They had just signed the contracts for the actors who would be playing the super hero team and were now trying to create ways to push the future movie as much as possible. I understand introducing Black Widow, it was a good movie to have her in and they needed a way to bring her into the universe. But, even though there were cross-over scenes in the other movies leading up to the Avengers, Iron Man 2 was really shoving it down the audience’s throat. I don’t know, maybe the marketing team just got very excited about the idea of all the Avengers merchandise flying off the shelves!

Anthony: Pushing the Avengers movie didn’t feel like it was too much to me. Sure, we knew that the movie was happening by that point but the studios needed to set up the idea of the Avengers with the general movie-going public who don’t know too much about super-hero teams. For me this was another solid entry into the Marvel movie-verse. And the 12 year old Anthony loved the scene where Iron Man and War Machine fought a tonne of killer robots. Worth the price of admission.

Leigh: Don’t get me wrong the movie was very entertaining and unlike the first one, there was less time spent on back story, leaving lots of time for action! And that end fight scene is pretty bad ass! But I do feel like, if you knew who the Avengers were before the movie, it was obvious they were trying to sell it. And if you didn’t know the Avengers they were kind of vague on the importance of some of the characters that will reappear in the Avengers movie.

Fun fact: the man who did the story boards for Iron Man 2 (Genndy Tartakovsky) was the creator of Dexter’s Laboratory and Samurai Jack

Anthony: Another fun fact: the soundtrack was a greatest hits compilation from ACDC (the greatest rock band of all time) and to give you an idea of the awesomeness and sheer badassery held within said album here are a few words from the liner notes:

“This album is the hard loud companion to a movie about a Marvel Comics hero who takes care of business with heavy fists, steel will, and righteous fury. But these fifteen songs were created and detonated by real iron men, with superhuman-boogie powers, no-surrender backbone and infinite rock & roll attitude.”

I think that pretty much says it all. Up next, Thor!