My tickets into the show: My press and exhibitor wristbands for Wizard World 2012.

While in the past I’ve made a concerted effort to keep separate my dual roles in the comic book industry, this weekend marked the first time I worked a comic convention both as media and as an exhibitor. Although some know the story of how I came into the industry, for those who don’t I’ll explain. In late September 2011 I was hired by Crystal Fractal Comics founder/publisher Derrek Lennox as the Toronto-based company’s Senior Editor. There was however a wrinkle to my hiring: I had to help him prepare five documents for print in three weeks, which meant learning Adobe Illustrator very quickly and editing four full length comic books and one “historical document” for Fort William First Nation near Thunder Bay. I even did some lettering and very minor scripting. Suffice to say those three weeks were quite hectic, but even still it gave me a crash-course of sorts in how the comic book business works behind the scenes, which of course led to some sleepless nights along the way. 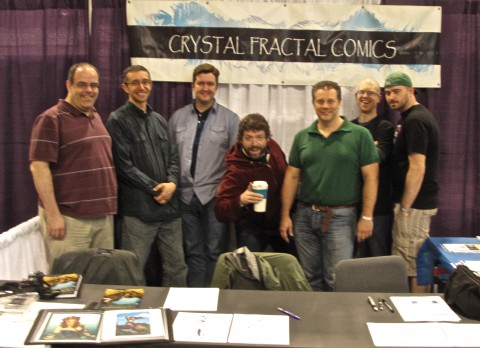 Moving the clock forward nearly six months, I’ve since worked a small comic book show by myself, organized and attended three separate store signings, took over as the company’s Social Media Manager and have established relationships with store owners, comic book media and most importantly, a great group of people I get to work with on a semi-regular basis. On April 14 and 15, I helped run my first exhibitor table at Wizard World Toronto. Working alongside Derrek and our creators in attendance, including Shawn Smith, Dino Caruso, Jae Korim and Kieron O’Gorman, we spent the weekend chatting with anyone displaying even a passing interest in what we had to offer.  I was altogether really pleased with the reactions from passersby, even if they didn’t buy one of our books. Responses were genuinely positive from any who opened an issue and flipped through it. Personally, I had a number of great conversations with random individuals who simply were looking for something new to read. In that regard, sales were very solid over the weekend and we even arranged to have our books placed in two new stores. The good news continued throughout the weekend as future projects were discussed with some interested parties, complemented by interviews Derrek and I did for both “Geeking Out Weekly” and “Jack-and-Pookie Publishing,” while Pop-Culture Hype and TDot Comics will be reviewing our books. We also talked to Alice Quinn, of Tdot Comics, and we’re looking forward to speaking with them again in the near future. 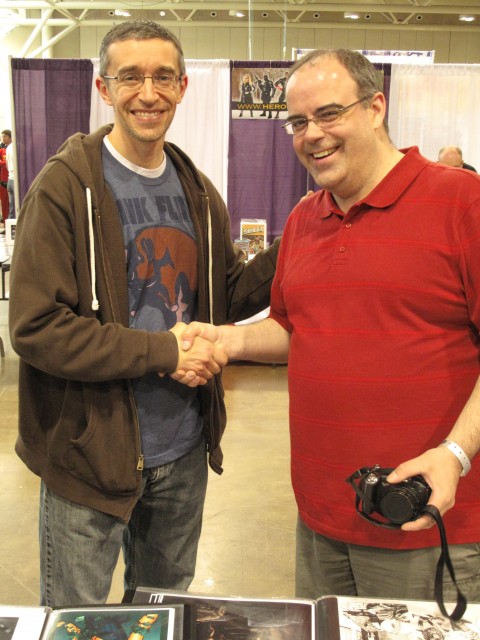 Dino Caruso and Kieron O'Gorman meet for the first time.

Despite these professional highs, they were hardly my favourite moments of the weekend. Roughly four years ago when Derrek first launched Crystal Fractal Comics, a number of writers and artists came together and collaborated on a series of short digital stories that function as prequels to CFU #0, the foundation of the “Crystal Fractal Universe.” One such story was written by Dino Caruso, while Kieron O’Gorman provided the artwork for the same story. The short story was eventually collected in the first issue of The Crossing, released in 2010, but the two had never met and worked completely in correspondence through Derrek. In what I can only describe as a cool, magical moment, Kieron and Dino met for the first time April 14, 2012 and I was lucky enough to be there to photograph their first handshake. Both guys are really talented and have indirectly worked together on multiple stories in a number of Crystal Fractals’ releases for years; it felt really special to be part of this semi-historic meeting. I also got to be part of another great photograph the morning of April 15, 2012 before the second day of the show kicked off. With less than 15 minutes to spare before the show began, we gathered together all the Crystal Fractals contributors in attendance for a large group photo. Although artists like Jae Korim, Jessie Lam and Sam Agro, weren’t part of it, the photo featuring Kieron, Dino, Shawn, Derrek, Andrew Uys and myself was a snapshot of our group and how far we’ve come. As independent creators it’s hard to push forward in a tough industry, but it’s fantastic to see everyone together, hanging out together, talking and joking with one another and more importantly supporting each other and their works. It’s how this industry, especially the indie scene, is going to survive; we need to support each other beyond personal agendas. You’ll soon find the scene, especially the Toronto comic book scene, is filled with talented individuals with one goal in common: we all want to create great stories and be part of something special in this city.

Beyond the great news Derrek, our creators and myself received, I suppose that’s the one realization I had this weekend that will stick with me going forward as we work to complete new projects and build Toronto’s comic environment one brick and one moment at a time.