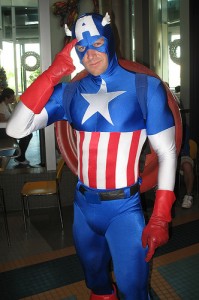 Who knew you had so much in common with Captain America? Talking to Box Office Magazine, director Joe Johnston dropped some knowledge about the plot of the Captain America movie. Yeah, we sort of suspected it was a period film, but did you know that Captain America goes AWOL? It’s all part of how Cap proves himself a hero, according to Johnston.

The great thing about Captain America is he’s a super hero without any super powers. Which is why this story, among the hundreds of super hero stories, appealed to me the most. He can’t fly, he can’t see through walls, he can’t do any of that stuff. He’s an every man who’s been given this amazing gift of transformation into the perfect specimen—the pinnacle of human perfection. How does that affect him? What does that mean for him emotionally and psychologically? He was this 98-pound weakling, he was this wimp, and he’s transformed instantly into this Adonis. You’d think he got everything he wanted. Well, he didn’t get everything he wanted. The rules change at that point and his life gets even more complicated and dire. For me, that’s the interesting part of the story. It’s got some great action sequences in it and some incredible stuff that we’ve never seen before. But at the heart of it, it’s a story about this kid who all he wants to do is fit in. This thing happens and he still doesn’t fit in. And he has to prove himself a hero—essentially go AWOL to save a friend. Eventually at the very end, I don’t want to give away to much, but he does fit in. But it’s the journey of getting him there that’s interesting. And it’s a lot of fun.

I’ve gotten into debates with lots of people about the idea behind Captain America. I think if you really want to get an idea of just who Cap is you’ve got to compare Ultimate Captain America and Brubaker’s take on the character (though, I should add that it is informed quite a bit by Mark Grunwald’s run.)

In the Ultimates, Mark Millar has made Cap a total jar head, a  unlikeable character who has moments, if only because you see what he ‘could’ be shine through. He’s focused on what used to be and how things were. He doesn’t adapt well, and looks at yesteryear through rose coloured glasses. He’s brash and spends a lot of his time solving things through violence. In one of his most unlikeable moment – when we’re actually supposed to be rooting for him, as he’s fighting against a nazi alien who’s telling him to give up –  He points to the A on his mask and says ‘You think this stands for France?‘

It’s a moment that’s pure movie machismo, and it’s a great line to show exactly who Ultimate Cap is: He’s exactly what everyone thinks the United States is. Take names and kicks ass while putting down everyone else. He is the prototypical Ugly American.. only with super strength.

Brubaker’s run is filled with character’s who’s lives are influenced by Steve Rogers and the one thing that they seem to agree on is that he’s ‘right.’ He still looks at life from the viewpoint of the scrawny kid he is, he’s not ignorant of his gift, but it never changed the way he looks at thing. Hell, Bucky is constantly saying: “I know how Steve would handle this..” and then rattles off a peaceful, teaching method.

It’s also interesting that one of the first things Brubaker does in his Cap run is heap praise on France’s ww2 resistance. It’s almost like he’s saying: Look, this is the difference, my Cap is the kind of guy who was there, and understands how the military works, who’s smarter than your average grunt. While Ult. Cap is your average grunt with super strength.

A large part of  me hopes that Joe Johnson gets this.. and from that quote I kind of think he’s in the right direction. What do you guys think? Am I way off base, is my love for Army of Shadows clouding my judgement? Feel free to tell me in the comments below.

Pete DeCourcy is Editor in Chief of Comic book daily. He also manages Blue Beetle Comics in Barrie, Ontario. You can find more of his writings at the Simple Art of Crime and You Practically Rock.  Paris is the home of Piaf and Charles Aznavour.