Fake News! Long before that phrase was coined there was J. Jonah Jameson, and long before J.J., there would be others spreading their version of the truth. It was through the pages of the Amazing Spider-Man as a youngster maybe ten or eleven that I first encountered an authority figure that didn’t tell the truth in J. Jonah Jameson. Well, that’s not true, I was pretty bummed when I found out everyone older than me, including my parents was not telling me the truth about Santa Claus or Peter Rabbit and the Tooth Fairy. I had trust issues 😊. Back to J.J., he was a newspaperman and I thought they were entrusted with printing nothing but the truth. I suppose J.J. did but it was his own twisted version of the truth, not as bad as Adolf Hitler and his propaganda machine, but it must have felt that way to a young Peter Parker and his alias identity, Spider-Man. Stan Lee used J. Jonah Jameson as a Spider-Man antagonist immediately after he was introduced. At first, it was only a J. Jonah Jameson’s newspaper with a seeming vendetta against Spider-Man, that we seen constantly pounding negatively on Spider-Man’s every move. This obsession with Spider-Man grew over time to an almost hatred of the character.

Today we will look at how this played out in the early pages of Spider-Man. 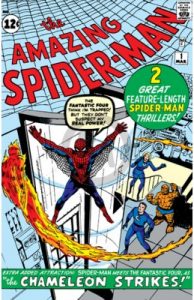 J. Jonah Jameson’s son John is an astronaut on his way back to earth when there is a malfunction in the returning capsule. Spider-Man saves the day and John however Jonah sees the intervention as upstaging his son’s space flight achievement and proceeds to rip Spider-Man in his paper, claiming he helped stage the mishap and subsequent rescue for personal glory. This sounds like a tabloid more than a daily paper (the Daily Bugle), and the just beginning of continual harassment for Spider-Man. The only plus is Peter Parker is a photographer for the Daily Bugle and his many pictures of himself help as Spider-Man help pay the bills.

Spider-Man battles the Big Man and the Enforcers. Peter Parker thinks J Jonah Jameson himself might be the crooked Big Man of Crime. J. Jonah Jameson thought Spider-Man was in cahoots with the Big Man. They were of course both wrong as the big Man turned out to be the Daily Bugles own crime reporter Fredrick Foswell. Foswell was later re-hired by Jameson after his sentence was completed. Foswell later repaid Jameson for his loyalty saving Jameson from a bullet in a battle with the Kingpin at the cost of his own life (Amazing Spider-Man #52). Jameson had been tackling the Kingpins organized crime gang in the papers and the Kingpin was going to shut him up. It was this strange mix of doing something so right and also so wrong that made Jameson a compelling character. Scary too as you never knew what side of his fence you were going to land on. Back at the end of Amazing Spider-Man #10, J. Jonah Jameson gives a siliqua as to why he hates Spider-Man which is basically jealousy. I always thought is was a little more complex than that. 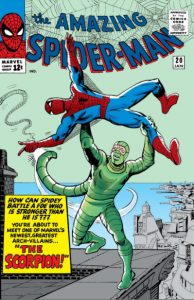 After retractions aplenty for printing in-correct stories about Spider-Man in Amazing Spider-Man #13 and Mysterio, and Amazing Spider-Man #19 J.J. is desperate to get Spider-Man and makes a very poor decision to help create a person more powerful than Spider-Man himself. He contacts a Doctor Farley Stillwell who claims he shouldn’t be a part of this mad scheme but needs the money $10,000. Mac Grogan an employee of J. Jonah Jameson who also needs $10,000 and isn’t afraid of losing his mind in the experiment a human Scorpion. The trial runs all too well Grogan is as powerful as Spider-Man maybe more so, but Grogan is also losing a bit of his sanity and breaks loose. Spider-Man intervenes and loses not once but twice. Doctor Stillwell has an antidote but fails to administer it and dies in a fall. J. Jonah Jameson knows he has made a colossal and possibly criminal mistake. Spider-Man saves his bacon by defeating the scorpion on the third try. The Scorpion returns again and again to the Marvel Universe battling Spider-Man, Captain America, Daredevil and others and haunts J. Jonah Jameson s conscious seemingly forever. It does not slow down his perusal of Spider-Man one minute. 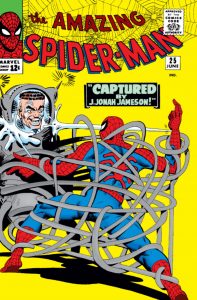 The first appearance of Professor Smythe’s Spider Slayer. Although it is J. Jonah Jameson who rents this first robot to hunt and trap Spider-Man, it is Peter Parker himself who sets things in motion by goading J. Jonah Jameson in to trying out the robot, that Peter thinks is harmless. It turns out to be anything but and has Peter Parker and spider-Man tied up in knots before the issue is over. J. Jonah Jameson would rent the slayer again in ASM #58 before giving way to Professor Smythe’s own ambitions to capture Spider-Man.

J. Jonah Jameson continued to hammer away at Spider-Man in the paper and it seemed to start sinking in to the publics consciousness and by issue #56 he seemed to be seen as a bit of shady character and that seemed to follow him for many years after that I think Stan Lee liked having Spider-Man appear to be on the edge of the law. It was cool to be on the wrong side of “the man” in the late sixties and early seventies.

J. Jonah Jameson has remained an important supporting character in Peter Parker/Amazing Spider-Man’s life. Leaving the Bugle, becoming the Mayor, and even marrying Aunt May! I always seen his behaviour as over the top, but by todays media circus standards he would probably be disappointingly normal.