It’s the end of the year which means it’s time to review the year in comics. In a year where there were a ton of exceptions mini-series and one shots (The Rocketeer Adventures is another great example), this one came to me very late in the game but blew the competition out of the water. It’s the latest Criminal mini-series from Ed Brubaker and Sean Phillips called The Last of the Innocent. 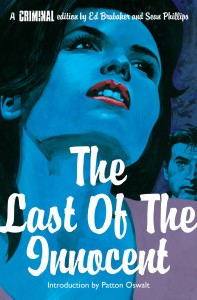 The premise is simple. Imagine Archie ended up marrying Veronica and working for Mr. Lodge.

And Veronica turned out to be every bit the bitch you figured she was, treating Archie like crap and having an affair with Reggie. Archie has enough and decides to off Veronica.

It is a simple enough story but as always with Brubaker and Phillips, it’s how the story is crafted that makes it stand out.

Brubaker’s story and dialogue are as always, top-notch. The characters seem believable. Brubaker has taken the archetypes of the Archie universe and brought them into the world of Criminal. The pacing is fast but never out of step.

It’s the type of writing that makes other writers want to step up to Brubaker’s level. A simple story that couldn’t be written any better but so different to what’s on the market.. Especially in collaboration with Phillips’ art.

Ever since I began reading Criminal, Sean Phillips has become a favorite of mine. His art and storytelling abilities always seem to grow from series to series and The Last of the Innocent is no exception.

Given how I’ve described the story above, you might be surprised to know that there are a number of flashback sequences in The Last of The Innocent that are done in a cartoony “Archie like” style.

And they work perfectly. 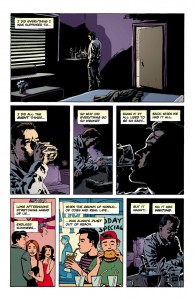 Phillips seamlessly goes from one style to the other without skipping a beat. The characters are still recognizable despite the difference in art styles. Every page and image fits. If this isn’t how Brubaker first imagined it, I imagine Phillips went above and beyond his mind’s eye.

And as the cherry on the top of the sundae, this book is completely accessible to new readers. While regular Criminal readers will recognize certain places and one surprise cameo, they aren’t necessary to enjoy the story. New readers can easily pick up The Last of the Innocent and enjoy it.

Assuming they like amazing art and an incredibly well written story.

So congratulations Ed Brubaker and Sean Phillips for your win as my best comic book mini-series of 2011.  I’ll try to come up with a good prize.

Next week, my pick for series of the year.