In this post is an idea I wish for someone to use because I have not the resources to do it myself.

But we’ll get to that.

I love documentaries. Okay, I love good documentaries, especially those about music.  Standing in the Shadows of Motown for example is probably one of my all time favorites. It covers the backing band for pretty much every Motown song that people love. If you love music, you should see this film…sorry…where was I? Oh yeah!

But unfortunately, good documentaries on comic books are few and far between. Sure, we usually get a small one per character on the DVD release of a comic book based film but very rarely is there a nice two hour film.

But there are a few. 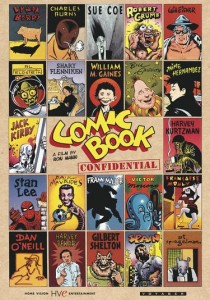 Comic Book Confidential is probably the best film on the subject of comic books. Released in 1988, Comic Book Confidential looks at everything you could ever want to look at in the history of comics; the origins of the comic book, the war years, the comics code, indy comics and more.  It pretty much ends right at 87. You watch interviews with creators like Miller and Moore right as Watchmen and Dark Knight are starting to gain full steam.  It a fascinating look at comics and the later half is a really good snap shot of the era.

Crumb is another worth while viewing.  While not explicitly about comics, it is a great look at one of the men who shaped independent comics.  It’s a little weird and sometimes disturbing but as a film we get to see a bit into the life of an artist and how he came to be.

And finally we have Prisoners of Gravity. Yes, I know it wasn’t a film but it is more then worth finding. This series from TVO was instrumental in getting me into more then just super hero comics.  Hosted by Rick Green, the show not only covered topics in comics but also looked at sci-fi, fantasy and horror. My introduction to The Sandman came from this TV series. It also introduced me to the world of William Gibson and Michael Moorecock.

But alas, these are from the past. Comic Book Confidential was available on dvd but it must have been a small print run as the dvds are in a high price bracket (you can find it in dubious legality in numerous places on the web but it can be downloaded legally through itunes and amazon) but Crumb is easily found.  TVO has done all of us a favor by posting episodes of Prisoners of Gravity online for us all to stream.

But why has no one else tackled similar subjects on film?

There are plenty of topics to chose from but I have an idea that I’m giving away free.

Okay, here it is.

Comic Book Confidential ends for all intents and purposes in 1987. A lot of interesting things happened in the comic book industry after that. Marvel’s fall into bankruptcy, the rise of comic culture in the last few years to the mainstream. Bio wise, Jack Kirby seems to be a perfect topic but to me it’s taking a look at the 90’s and very early 00’s that would make for a fascinating film. Think about the founding of Image for a minute.  A lot of you newer readers might not realize how very big and how very rich the Image founders got. How did this whole market fall apart?  It’s been covered in print but I think someone could do a really interesting job on film.

What about you dear reader? Any subjects in comics you would like to see covered?