It’s been a little ov 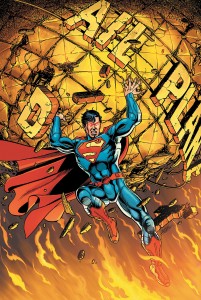 er two weeks since DC announced that it was rebooting its Universe and releasing a whole slew of #1s. During that time, I’ve struggled to organize my thoughts on the subject, how this will affect the fans and the industry itself.

I should probably preface this by admitting that I am and always will be a Marvel fangirl. Despite the 90s and the foil covers craze, Marvel always struck me as being the hip, slightly older cousin who always had a great time. DC Comics, on the other hand, is like the elderly relation you’ve stuck in a home – grumpy, curmudgeonly, and about as relevant as nipples on the Bat-suit.

DC, for the most part, lacked the type of characters that I could relate to or even care about. Currently, I read two DC-titles: Birds of Prey and Zatanna. Occasionally, I’ll go back to read a trade paperback of Greg Rucka’s Wonder Woman or I’ll pick up a Batman trade. I want to get into Geoff John’s run on Green Lantern, but it’s failed (so far) to hook me.

My first thoughts on the reboot announcement was that I was sure that something was going to happen, but not necessarily exactly what DC announced was going to happen. In September, I fully expected that the company would make the announcement that this reboot was the launch of the DCU equivalent of the Ultimate Universe. Though this would have been profoundly manipulative in terms of publicity, I could understand DC jumping on the bandwagon – it was a smashing success for Marvel as both seasoned readers and it brought new fans (to both Ultimate Universe and the main Marvel universe). Plus, DC could look at the disaster that precipitated Ultimatum and NOT DO THAT.

However, given the subsequent announcements, I now doubt that this is the case. So, I’m going to examine the reasons for this reboot and what I think this means for DC Comics and the DCU.

1. Rebooting the DCU will put an end to the long, often convoluted, and completely inaccessible continuity. This will give writers an opportunity to become more creative.

I hate the continuity of the DCU. It collapses in on itself and, with so many crises happening and being undone, it’s cumbersome and unwieldy. I find it difficult to handle DC’s continuity as a reader, I can’t imagine what’d it’d be like as a writer. So, on paper, this reboot makes sense in that writers can pick and choose which stories remain as canon and which ones do not. (Though, I would argue that a good writer can make even the most convoluted continuity accessible and interesting.)

That being said, the DCU is known for its Universe-shattering crises…which are usually undone a couple of years later. Truthfully, I’d be surprised if this reboot was any different. In two or three years, they’ll be crying “Mulligan”, and everything will go back to the way things were before. Whether or not enough fans stick around to see this happen, is another consideration entirely.

2. It will also make the characters more modern/relevant for today’s readers.

I don’t think that transferring characters back to an earlier point makes them more relevant or relatable; obliterating an entire narrative Universe for that purpose is stupid and shortsighted. It’s the same reason why I disliked Brand New Day and the rebooting of the Spider-Man universe (even if it did bring the magnificent Dan Slott to the title): revisionism is nothing more than lazy storytelling. It’s the easy way out and I’m disappointed that DC has such little faith in its creative teams to come up with new narratives for characters steeped in such a rich history. 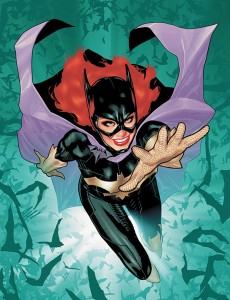 Am I excited to see what Gail Simone is going to do with Barbara Gordon as Batgirl? FYS (Warning! Link is definitely NSFW and actually contains naughty language within it). But I also think that if they get rid of Oracle while they undo the horribly sexist history of the character (who was disabled out of some misogynist whim but who has also remained in a wheelchair despite other characters having grievous injuries just undone), but they also lose one of the greatest female characters that the DCU has ever seen – largely due to the efforts of a couple of creators who refused to let Babs be used, abused, and discarded.

Also, what happens to Stephanie Brown, who’s pretty kick ass in her own right.

I guess we just have to wait and see. Truthfully, I’d be a lot more concerned if it wasn’t Gail Simone on the title, so I’ll put my trust in her and hope for the best.

3. The Universe will become more accessible to new readers (and seasoned readers). As with the characters, this will be “A fully ‘revamped’ DC Universe for a ‘more modern and diverse 21st century’”.

Comics are a niche market. And, frankly, had I invested all this time in the DCU only to have it rebooted (again), I’d be pissed. A general rule concerning reformulating a product to attract new consumers, you don’t want to change the product so much that you completely alienate your current consumers. Because they’re the ones who have supported your product throughout its life and who will continue to do so (brand loyalty, for the win!). When it comes to changing the formulation of a product – whether it’s changing the scent of laundry soap or disregarding a good chunk of seventy-five years’ worth of continuity – you need to temper the potential loss of current consumers with the potential gain of new ones.

I think that this is going to be like every other Universe-altering event that DC puts out. Current fans will probably give the reboot a chance but will likely abandon the title in the long-run; new readers will pick up the #1s and then nothing else. Best case scenario? The #1 issues will sell well; like 52 and Countdown. And then, just like Trinity and Weekly Comics (remember those?), they’ll be a steady drop in readers until only the hardest of the hardcore will be picking it up.

What makes DC think that this reboot will be any different from any other crisis that happens every couple of years that also fails to “hook” new readers? I mean, there’s more to enticing new readers to pick up your books than by making new-reader friendly/accessible but also INTERESTING and compelling so new readers will want to pick it up. You can’t have one without the other; well, you can, you’ll just fail on two levels: you’ll be unable to attract new readers and you’ll end up alienating old readers. 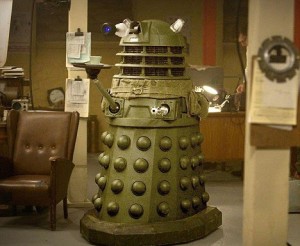 The new Doctor Who is a magnificent example of the ability to be successful at making a universe with a decades-long continuity and rich mythology accessible and interesting to new viewers starting out of the gate while remaining meta-textual and interesting to those who watched Doctor Who when they were little kids and hid behind the couch whenever the Daleks made an appearance.

4. The announcement is promotional gold.

The more PR that you can garner, the better the product will sell, and there’s a windfall, in the short-term. But the problem is DC’s taking a profoundly short-sighted view on this. Again, I refer back to the weekly series (Countdown, 52, Trinity) that were successful and that eventually failed because DC lacked the foresight to stop milking a good thing when they had it (and a creative team to keep it going).

Frankly, if you want to really reap the promotional benefits of this news and attract new readers, I’d recommend a monthly title that’s just a good, self-contained story (think more like individual episodes of Law and Order rather than the long drawn-out convoluted mythology of Lost, guys). If there’s a great creative team behind it, people will buy it. It’s an awesome starting point for new readers (who will then become interested in the characters and go on to read the monthly series) and, for established fans, will be a fun little detour. You wouldn’t even need a dedicated creative team but have artists and writers pop by to tell a story. If DC can consistently produce quality books, I think they’d be able to overcome the potential problem of inconsistent readership (for example, individuals only picking up issues that have a certain character showcased or that have a certain creative team). 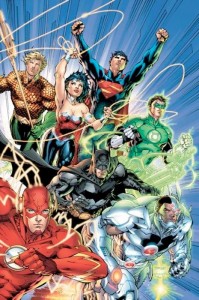 I’m torn about this part of DC’s plan. On the one hand, this is pretty awesome since digital distribution is where the publishing industry is heading (though whether or not print will ever completely die is another discussion). However, it’s still in its infancy. On the other hand, this is also bad news for direct market retailers as they are now competing with DC directly for consumers. And I don’t want to be prematurely announcing obsolescence of direct market retailers. They’re not just going to suddenly disappear (for the lucky ones, I don’t think that they’re ever going to completely disappear, either). Not enough people have bought into digital distribution and a lot of people (myself included) have a number of issues with paying the same amount of money for a digital copy (with no bonus features) when, theoretically, a digital copy should be easier (and cheaper) to produce and deliver.

DC hasn’t sold me on the business case. Frankly, this seems more like the death rattles of a company rather than a rebirth.

Shelley Smarz is a fangirl, comic book scholar, and business woman. A big fan of both X-Men: First Class (if you thought she was a fan of the Xavier/Magneto Ho Yay! before, she’s a full-on shipper now!) Thor (especially, though not exclusively, due to Colm Feore’s appearance as King of the Frost Giants), she’s excited for the release of Green Lantern tomorrow and for Captain America: The First Avenger later this summer.