Please Note: The following column only represents the views of columnist Brent Chittenden and not necessarily the views or opinions of Comic Book Daily, its writers, editors or owners. Please read the entire column before commenting.

I go away two weeks and what happens? A chunk of media attention and rumor gets devoted to comics.

The mainstream media pick up on a comic book wedding of a character in an X-Men book.

And then we get another media watch because a DC character of some note has had his sexual orientation changed in the New 52 with all signs currently pointing to Alan Scott, the Earth 2 Green Lantern.

And believe it or not, this doesn’t make me particularly happy, in fact it sort of irks me.

But let me explain.

I am not against homosexuality or gay marriage. I’m all for it. I’ve been to one gay marriage a while back of a cousin who I love very much. Her partner at the time was pretty awesome in regards to hosting and talking to the family and the wedding on a whole was pretty solid. At the time, the only downer was my cousin’s partner’s family refused to attend. I’m not only attending another wedding of two women this year but I’m actually going to be doing the service (long story).

What irks me about this whole situation, comes down to two things.

The comic book companies trying make off like this is a big deal when it isn’t.

I’m sorry, Northstar getting married and Alan Scott being gay are not a big deal for the pure fact that they are lower tiered characters. Third stringers at best. This doesn’t mean that these characters don’t have their fans but to the public at large, it means very little. 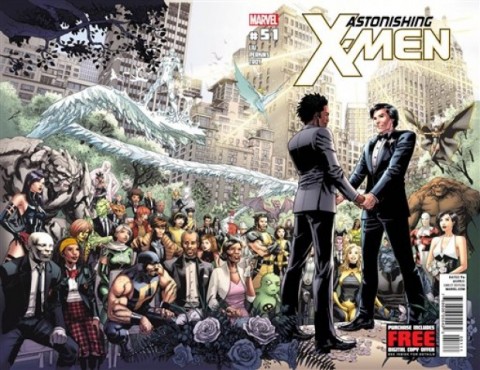 Northstar’s wedding is just a continuation of his story that makes sense and I applaud the writers and editors from following through with it instead of completely avoiding the character’s sexuality but let’s be honest, Northstar hasn’t been an in demand character and to the outside world, he isn’t Wolverine or Cyclops so he’ll be forgotten in a week and it will leave little if any mark in the public’s consciousness about positive gay super heroes. The only time Northstar has been in the public eye was when he came out in what was possibly one of the worst outings of a gay character ever… but it was the 90’s so I’ll give it some slack.

DC’s possible turn of Alan Scott is a step forward but not big enough.

A number of places have riled against DC’s lack of homosexual characters. For a while there it seemed like whenever one appeared like Rene Montoya or Batwoman, they quickly were shelved. DC decided to take a positive step and make a name brand superhero gay. Awesome. Except they were kind of off the mark. No one outside of comic book fans has any idea who Alan Scott is. Sure, he’s the first Green Lantern (but after the New 52 is he even that any more or just Earth 2 Green Lantern?) but he has no presence media wise. He wasn’t in the Green Lantern movie, he wasn’t in Justice League, etc. While I think this a great step forward for DC I think they could have done better. I understand that DC is part of Time Warner and a corporate entity but Alan Scott is a really safe choice. He’s sort of a Green Lantern but not recognizable enough to get a stock holder that ticked off about it.

But why not Hal Jordan?

DC missed an opportunity to go for the jugular and at the same time do something really new with one of their characters. They could have come out and proclaimed “Superman likes dudes.” and you’d not only have the gay community singing your praises but from a story point of view, DC can actually do what they promised with the New 52, an entirely new story and set of circumstances for the man of steel. Sure you would piss off a ton of Superman fans but you did that with the New 52 anyways.

It was a chance to do something new as well as help broaden the world’s thinking.

My main problem is really with the world.

Don’t get me wrong, I think it’s great that these companies are trying.

I just think they can do a little better.