We’re going back this week. Back in a retro sense, but also a bit of history. 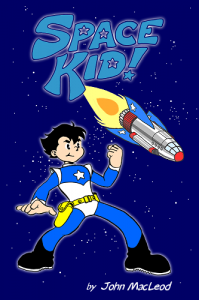 John MacLeod’s Space Kid is a throwback. And a self-aware one at that. If you enjoy 50’s science fiction, Astro Boy or rocket ships and ray guns, then you are gonna love Space Kid. The titular hero is as advertised. A sci-fi hero kid. A pre-teen saving the galaxy from pirate , robots and aliens. It’s one of those kid friendly stories that adults love as well. 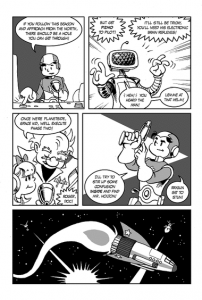 With a robot side-kick, plucky girl and comical scientist, it hits all the right notes of the Japanese stories that inspire it (Scottie say: and Buck Rogers / Flash Gordon that inspired those). But it’s also its own story, not just a clone or a parody. John spins yarns just as fun and exciting as those he grew up enjoying. And they are THAT kind of story, enjoyable ones. None of the cynicism, or rough edges we see now, and yet not cliché or trite. Just good old-fashioned adventure. 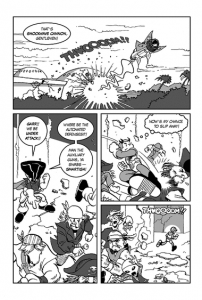 What makes Space Kid extra enjoyable are John’s behind the scenes notes about his influences and specific references on each page. Whether a character named for a creator or a spaceship modelled on another craft, John provides a broad history of the genre as he weaves his narrative. 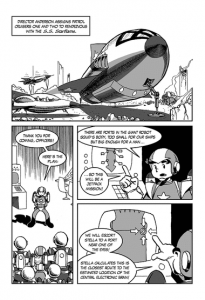 And he nails all of it. Not only the story elements, but the art as well. It’s half Tezuka, half Amazing Stories covers. The Starflame, Space Kid’s ship is a good old Rocket ship, with fins and a fiery engine. His art is clean, black and white with greys and shows the hand of a guy who has been drawing for over 40 years. 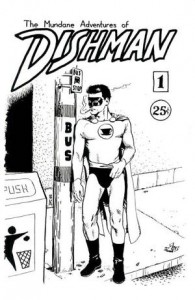 Yeah I said 40 years. Remember I said history? Well John has it. For me personally it’s an old project of John’s that is really important. A small black and white Xeroxed comic called The Mundane Adventures of Dishman. One of the early books that inspired me. 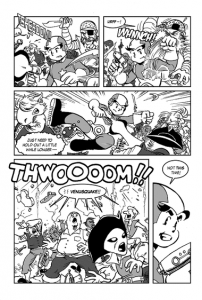 So if you’ve had it with grim and gritty, with mega crossovers or near soft core heroines, come on over to the 26th century.