All of us have done something we’ve regretted. A bad hair cut right before school photos. Owning an album by C&C Music Factory. Proclaiming New Coke better than old Coke.

Me? I own the entire Deathmate mini series from Valiant Comics and Image Comics.

Let me set the stage for you. It is 1994 and if you go into a comic shop and shine a flashlight, you might be blinded the ton of foil and hologram covers that are on the racks. Valiant Comics had been around since ’92 and put out some rather decent material. Books like X-O Manowar and Solar were taking some interesting twists on previously established comic book ideas. Image Comics had also appeared in ’92, made up of a ton of flashy young artists and they were selling comics like gangbusters.

So in ’94 the two companies combined for a crossover event riddled with lateness (all on Image’s side), nonsensical storytelling and a whole whack of shiny covers.

But how does it hold up today?

We start with Deathmate Prologue published by Valiant. Gold foil with a Jim Lee/Bob Layton art piece, I crack open the tape of the bag open it up to reveal… a signature? Apparently when I met artist Barry Windsor Smith, I had this on hand.

I really hope I had something else on me as well.

To be fair, BWS’s art is still as sharp as ever and it has an interesting little feel to it due to the inking of Jim Lee. The story even makes a little sense. Solar, who’s more or less a god in red spandex, lets the girlfriend he’s been keeping alive, die. This makes Solar sad and then he has some sort of personality meltdown where he enters another realm called Unreality. In Unreality, Solar meets Wild C.A.T.S. member Void who is also kind of god like. Naturally, they have some sort of link and decide the best course of action is to bump uglies. This creates an amalgam universe of sorts. The next story features the Geomancer from Valiant meet up with some of the amalgam characters who are looking for him but luckily Rob Liefeld character Prophet shows up to help him. You see both men are pretty much the same as they were and they both know that something is terribly wrong with the universe.

I followed this up by reading Deathmate Yellow (Valiant). Yes kiddies, back in the 90’s, numbers were so yesterday so hip comics used things like #0 instead of issue #1 and words and in the case of Deathmate, colors. In what appears to be an effort to avoid confusion with Deathmate Prologue’s gold cover, the foil on Yellow is kind of green tinged yellow cover. We start with Archer and Armstrong in the future… and it is slowly being revealed that history isn’t what it used to be.  The characters then go back in time and meet the Wild C.A.T.S.’ Lord Emp in Ancient Rome…where he confirms this plot point.  So now we’ve had this explained to us three times. We go into story two where Zealot (from the Hard C.A.T.S) has been hired to murder Harda (from Valiant’s universe) for…um…er… no particular reason. Ninjak is on the scene and stops here.  Apparently they used to have sex or something once. Ninjak tricks her into a concrete cell…or something and then…yeah… um… STORY THREE!  Hard C.A.T.S. are fighting Harda… I think and most of them die except one who then shoots the guy who put the hit on Harda. Story Four… Master Darque is floating with some chick… Archer is fighting Grifter…. Shadow Man takes time out from the many Shadow Man vs Aerosmith ads that have been in these comics to help Grifter and Archer out… somehow? The art is serviceable but you really do miss Jim Lee drawing Zealot.

Okay… that made little sense… on to the next one… this is going to get Age of Apocalypse bad isn’t it?

Deathmate Blue (Valiant) is actually blue but still shiny.  Magnus (formerly a robot fighter) and Battlestone (Liefeld creation) are duking it out when the Gemancer runs in and tells them about how the universe isn’t right and ending. This leads to Secret Weapons/Cyber Force fighting or something…the end result of this issue is a bunch of the bad guys and a bunch of the good guys (including Solar and pre-Alan Moore Supreme) team up to hopefully fix the sham universe.

Three issues in and I have completely ceased to care about this story. 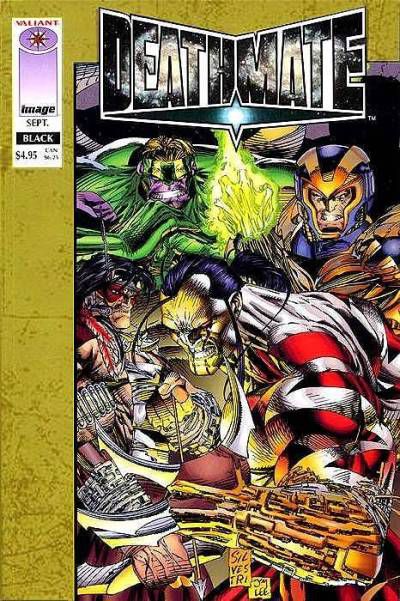 Deathmate Black (Image) is a gold foil cover with some etchings in it. Not black. We get a pretty decent Silvestri/Lee cover.  It is at this point I should mention something.

Much like are you a DC or a Marvel, there was a bit of a line between Image fans and Valiant. You tended to like one or the other. At the time, I was an Image guy due to the artists involved. As I’ve gotten older, a lot of the Valiant stuff from that period seems much better or at the very least, interesting. But if it seems like I favor the Image stuff, it’s probably a bit of nostalgia.

Deathmate Black brings with it two major differences. The paper stock has been upgraded and the art team has expanded… a lot. Given the already deadline late books in their own line, it looks like Image saved time with Black by diving up the art chores among eight different artists. There were only two writers. Despite this the art isn’t nearly as jarring as I thought it might be but the story is non-existent. Honestly other than the fact Gen 13 (in an altered form) and a really stupid version of X-O Manowar show up, I couldn’t begin to tell you what happens.

Deathmate Epilogue (Image) has a shiny silver foil cover and art by Silvestri and Joe Quesada. Silvestri does the interior art on the first story while Quesada does the second.  Essentially the good guys find Solar and Void and the universe ends and then returns to normal and split up into the two company owned halves. Silvestri’s art seems like it’s trying to do it’s best BWS impression with mixed results. Quesada’s art isn’t good. He’s come a long way from these days.

Which brings us to Deathmate Red.

No, you did not read that wrong.

You see, as I had previously mentioned, Deathmate was plagued with lateness problems from the Image Comics side of the crossover. Story goes that Bob Layton showed up at Liefeld’s house and wouldn’t leave until he finished his pages for Prologue. 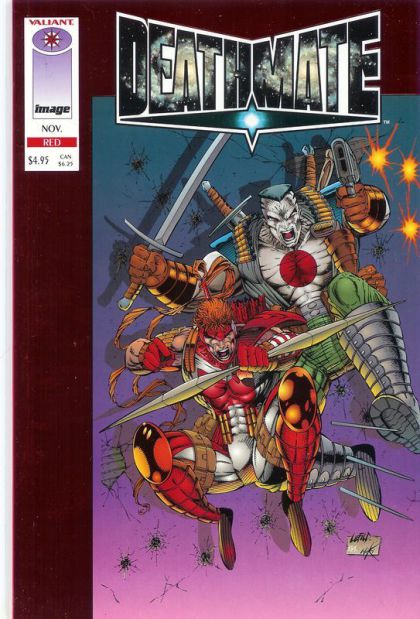 Deathmate Red does not take place after the Epilogue but it was drawn by Rob Liefeld and subsequently shipped well after Epilogue was out. Not that it matters. It reads like a regular Youngblood comic did at the time. Most of the team looks the exact same as they did in the regular book other than the addition of Bloodshot (who barely appears despite being featured prominently on the cover) and once again we have a character telling us that the Universe isn’t right. If this particular plot point was a horse it was kicked into glue well before it came up yet again in Red.

On a whole, Deathmate sucks, no two ways about it. While the story is mildly better on the Valiant side, much of the art (save for the BWS stuff at the beginning) seems lackluster compared to some of the Image stuff. The Image side however was terrible for story.

For the record, I picked up this entire set for only two bucks a few years after it had been published.

It was a waste of two perfectly good dollars.

Valiant used its ad space pretty wisely to promote upcoming books that had characters featured in that issue. For instance the Ninjak solo comic was promoted in the book with Ninjak in it.

Image Comics once had a character named Bloodbow.

There is an ad for Wizard magazine branded comic bags and boards in the Prologue issue. For the life of me I don’t remember these at all.

There is also a “Sneak Peek” at the Youngblood cartoon… that never happened… but it did get a snazzy bit of animation for commercials.