There’s a half-dozen strips on the newspaper comic page that could be given mercy killings to make way for a strip like Snowflakes. Set somewhere in the snowy heights of the Andes, Snowflakes follows the lives of a group of orphans left largely on their own by the nuns who nominally look after them.

Like any orphan, their greatest wish is to be adopted. But with one opportunity a year for adoption, the kids have a lot of free time on their hands. And, well, they are kids. And an odd mix at that.

And that’s the strips first strength, it’s actually funny. The characters are odd, but not to a grotesque level. The punchlines are funny but so are some of the other moments or simply the situations the jokes are born out of.

And then there is the art. And here I really can say that snowflakes is better than much of what’s on the newspaper page. Chris Jones’ art is familiar yet unique. There’s almost something like the slightly grotesque style of some of the British comics like the Bash Street Kids. 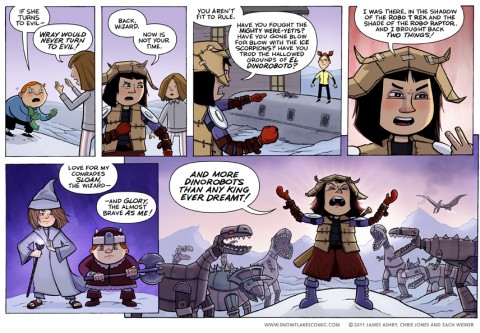 As the stories stack up, things can get a little weird, but that’s what makes the strip stand out. You’d never see the scene above in Family Circus or For Better or For Worse. It’s got all ages appeal, solid art, actual laughs and a unique vision. If the comics page in the paper leaves you as saddened as it does me, then take a trip to the Andes and spend some time with some loveable orphans. Just keep a hand on yer underwear. 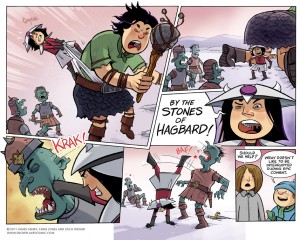 And while we are on the subject of all ages comics about kids that deserve to be on the comics page in the papers, I have to again plug Max Overacts. It does a great job of filling that empty spot in your heart left by Calvin and Hobbs. And if that doesn’t convince you, it was up for an Eisner last year! 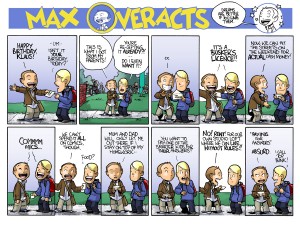