It sort of sucks.

Not that I’m moving for any bad reasons really. I’m moving in with my girlfriend (who is incredibly pro-comic book) and I’m lucky in the respect that due to my living situation I get plenty of time to move my stuff in slowly.  This is good because the woman gets to get used to the idea of the large amounts of trades coming her way (she’s got no idea) and it means I get to save my friends from breaking their backs giving me a hand lugging furniture.

That being said it means that a lot of stuff comes out of storage. Some of it good, some of it heavy.

Like the monoliths of the comic collecting world, the long box. 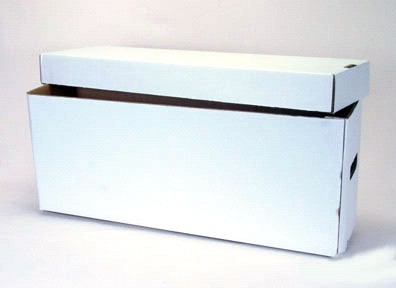 Long converting to mainly a trade buying format, my long boxes have been more or less pared down to two solid long boxes and enough miscellaneous short boxes and other containers to probably make up a third and maybe one half more.

But like all moves, you tend to get curious about what’s inside the boxes and occasionally procrastinate packing while looking at stuff you should be sealing away until it is at its new home.

So for every now and then I’m going to dip into my long box… man that sounds dirty… and take a look and review what’s inside.  Many of the contents are going to be from the wonderful comic book era of the 90’s so be prepared for some rants.

The first entry for It Came From The Longbox is Flinch. 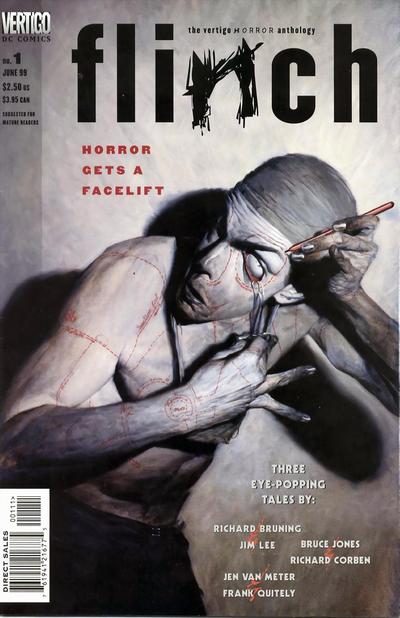 Flinch was a horror anthology from DC/Vertigo. It ran for about 16 issues. I appear to have only the first five (I believe this was around the same time I switched comic shops and probably didn’t re-up it due to my current college costs). Coincidentally, issues 2-4 all has Richard Corben covers.

They still hold up pretty decently.

Like any anthology, Flinch suffers from the fact that some stories aren’t as good as others but on a whole (at least for the first four issues), there is some pretty good stuff here. The series itself was very similar to the concept of the old EC anthology comics; a bit of horror here, bit of satire there, voila!

The stand out story from the first issue is probably Wolf Girl Eats, written by Bruce Johns (who was beginning to be a hot property once again at that time due to his run on the Hulk) and drawn by Richard Corben. Very much classic form for both creators about a girl raised by wolves and coveted by a preacher and a teen. 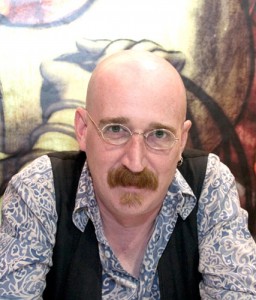 It’s a nifty little crime morality play that I’m sure was to help to draw Vertigo horror readers over to 100 Bullets which would have came out the same month as this issue. It also features a story drawn by Bill Sienkiewicz.

Issue three has a very different take on the sinking of the Titanic that features human sacrifice and no Celine Dion from Garth Ennis and Kieron Dwyer. But it alsomt seems from this point on the stories get a little rushed.

But I do love the idea of a horror anthology and Flinch wasn’t a bad one, I think maybe that it was just a victim of the “monthly” idea and would have fared much better in quality and longevity had they adapted a different schedule like quarterly. Or as once a year graphic novels like the books Dark Horse used to release.