The Mission: Read Blackest Night as just a mini-series. No tie in books, spin offs or Green Lantern allowed beyond what I’ve already read.

The Goal: To see if it can be read as a mini-series unto itself. 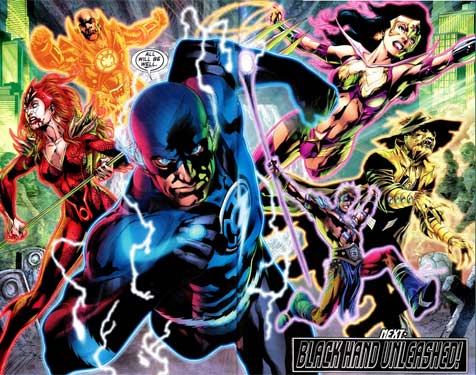 As many of you know, as a survivor of the great X-Men crossover wars of the 90’s, I am adverse to reading crossovers of any sort. They tend to be too convoluted and too expensive for my tastes.  But somewhere along the line, it was suggested to me that I try reading Blackest Night as an experiment. I haven’t read much of Geoff Johns’ Green Lantern run (I got bored by the second trade) so I have no real previous knowledge of what’s going on in the book.  I was given the entire Blackest Night mini-series to read with none of the Green Lantern tie ins or other DC tie ins nor any of the fill in books when Blackest Night started running late.  Just the main mini series.

Which brings us back to the question, is it readable in those confines?  And the answer is: sort of. 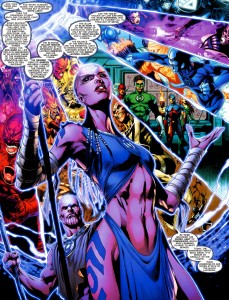 Geoff Johns has never been a writer that’s done anything for me.  And it’s not to take away from his skills as a writer, honestly I know he’s a good writer but for whatever reason he has yet to tell a story that grabs me at all.  Now to his credit, there are moment of Blackest Night that I enjoy.  The entire set up with Luthor in his bunker awaiting the legions of the people he screwed over in life come back to get him in death is really sharp and witty stuff. The art by Ivan Reis is pretty stellar especially in the last issue with this gigantic gatefold page, DC should be turning that puppy into a poster right now.

To their credit, if you read comics and if you have at least a vague notion of what’s occurring in the DC universe before Blackest Night, you’ll be able to follow it.  Due to reading Final Crisis and Grant Morrison’s Batman, a lot of what occurs in the series that I didn’t get right off the bat, I kind of figured out, but there are still some plot holes.  Like Green Lantern just abandoning Earth and then he returns with his rainbow team of friends, none of which are really well introduced. Not to mention I find it hard to believe that Donna Troy is the only one who got bit by one of these things.  Yes I know it’s explained in Green Lantern or another tie in, etc, etc, but that’s kind of missing the point a little.

As well, I never found a satisfactory explanation on why certain heroes/villains came back and others didn’t (I have been informed that’s what DC’s next event, Brightest Day, is going to tackle as subject matter).  And the Anti Monitor makes an appearance yet again…ho hum.

Say you’re a fan who is just getting into comics.  You’ve only got a couple of bucks to spend on you first comics and you see Blackest Night.  It has a ton of superheroes in it, the art is fantastic…and zombies!  It’s a deal for an issue because as a new reader it looks like you’re getting a lot of bang for your buck. 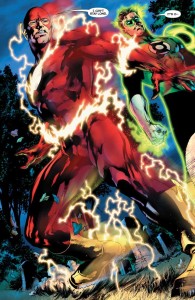 And then you read it and to a new reader, a good 70% of this book won’t make sense.

The sad part is, there are ways to get around this.  A recap page or on the back of the front cover for instance would have been a help.  “Hey there, we know some of you might not have the money or inclination to buy everything Blackest Night, so here are the points you missed”. Not only does that catch us up on Donna Troy and her zombie kids and how Green Lantern made the Rainbow Coalition but then you’re doing advertising for the other books.  Sure I might not be interested in the Green Lantern plot line but as an old Titans fan, I’ll remember the tragedy of Donna’s kids and I might be inclined to pick that one up with that little bit of reinforcement.

Over all, it wasn’t a bad read but it was obvious which holes were filled by one shots, tie ins and various other bits.

Would I recommend it to anyone?

The story just kind of keeps the status quo of the DC universe.  Nothing much is changed at the end of it other then a few characters are back from the dead (and most of them haven’t really been gone long enough to miss). There were very few beats I cared about and in the end.  Let’s take Final Crisis as a comparison.  While Final Crisis has probably as many tie ins as Blackest Night, I would say it’s an easier read (by itself) then Blackest Night.  Not only that, there are more moments that will stick with me then moments from Blackest Night.  Not just things like Batman’s death because to be fair, it’s hard to top that one but even little moments like the legion of forgotten superheros in limbo charging at the enemy or Tattoo Man kicking ass.  Even the one panel moments where we see the multiverse.  Where as in Blackest Night, I read it twice and that was less then a week ago and really I remember the heroes coming back and Luthor fighting zombies. That’s pretty much it.

So there you have it, if you have a different view on it, please drop me a line, I’d love to hear from someone else on the matter.