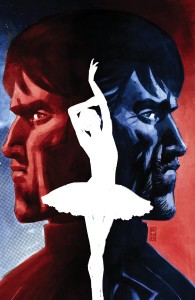 Nathan Edmondson is something of a rising star in many comics readers’ minds. He first caught attention with Image titles OLYMPUS and the astonishingly simple and moving THE LIGHT, but he garnered even more critical praise with his 2011 book with artist Tonci Zonjic, WHO IS JAKE ELLIS?, a locomotive of a spy thriller about a man with a (possibly) imaginary friend that helps keep him one step ahead of his enemies. To follow that up, Edmondson created THE ACTIVITY, an ongoing series about the close-to-real-life Team Omaha, the self-described “Holy Grail” of black ops outfits. Edmondson’s exacting take on special ops falls somewhere between Mission Impossible and Black Hawk Down, with enough spycraft and gunplay to attract more than a few Modern Warfare fanboys. But if THE ACTIVITY and JAKE ELLIS are Edmondson’s ode to testosterone-fueled spy fantasies, then his latest book, DANCER, is a love letter to classic spy fairy tales such as 3 Days of the Condor, albeit with a “spy-fi” twist.

Dancer is the story of Alan Fisher, an aging CIA assassin, and his much younger ballerina girlfriend, Quinn. There’s a twist early on in the book that to reveal would spoil much of the fun, but suffice it to say that Quinn ends up in the hands of a very personal enemy from Alan’s past, and Alan gives chase across snowy European cityscapes to save her, from Milan to Berne to Dresden.

The story and setting of DANCER are timeless. Only a brief mention of cell phone use (and possibly the architecture of a very real location central to the plot) place the story in contemporary times. Otherwise, the costumes worn and tools used wouldn’t look out of place today or 30 years ago.

DANCER’s stage is seemingly inhabited by only the main cast, with all other characters floating through the background like living (and dying) ghosts. Spies and their handlers meet on rooftops and speak in heavy-handed metaphors (the titular one being most prominent) while looking across window-lit old-world skylines. People attend ballets and lounge at open-air cafes. Sniper rounds crack from balconies and clunk against metal doors on faraway rooftops. Pigeons scatter through the falling snow. If nothing else, DANCER is a study in atmosphere, largely thanks to artist Nic Klein’s understated brushwork and muted color palette.

The story is small and well-told. Edmondson has a knack for meaningful dialogue with limited exposition. His characters speak naturally, even when they’re talking about unnatural things. Although Edmondson’s been tapped to write for age-old DC and Marvel titles and is currently working on a Splinter Cell tie-in, he seems most comfortable when writing his own characters, and I certainly hope he continues to create new and exciting titles like DANCER, and continue the ones he’s already created. A follow-up to JAKE ELLIS is due in November.

That being said, and although I suppose there are more stories to be told about Alan and the mess he’s uncovered, I kind of hope Edmondson let’s this one just ring out. It’s almost perfect in its beauty and simplicity. I only wish the spark between Alan and Quinn were more pronounced. A single scene could have made it more clear that they were worth the trouble to one another. That and Alan’s seemingly superhuman endurance goes unaddressed. Or maybe it doesn’t. I’ll let you decide.