Okay, it’s gonna get a little weird this time.

So, there’s a thing that happens with webcomics. People leap in, start creating stuff and sharing it. It’s not unique in terms of artistic development to do a lot of work while figuring out what your voice is, or what sort of work you want to do. Artists have done that forever. But with the web, people are sharing this early work right from the start. So you get to see people stumble around, learn and grow. 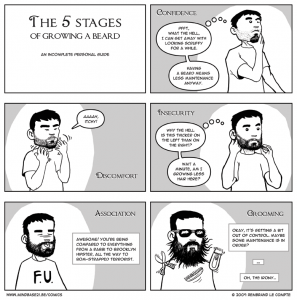 For Rembrand Le Compte, this is definitely the case. He starts out doing journal/bio type stuff. It’s rough, it’s black and white and it’s early work. 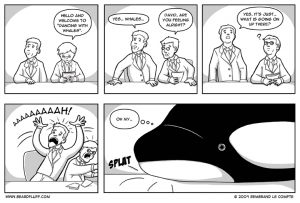 And then he starts throwing in gag work. Random oddities. Experiments with form and style. You can almost see when he discovers things like Scott McCloud‘s Understanding Comics and his experiments with the infinite canvas. He tries out grey tones, colour, gags, ‘stories’ and almost surreal stuff. He also has bits and pieces of filler and guest comics. 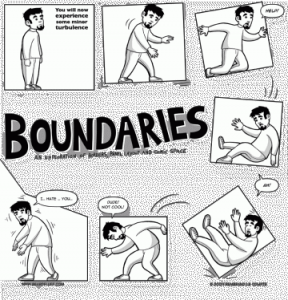 And then BAM! suddenly there’s this new story. 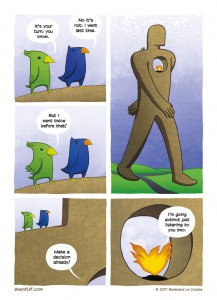 Part of what he’s labelled Fire and Stone, it tells the story of two birds, a rock Golem, a Phoenix and a fantastical setting that is slowly revealing itself as the story progresses. Flare is a good title for the first chapter because it’s like that’s what Rembrand had, a sudden flare of inspiration. Either that, or he discovered the Flight Anthologies because this story would be right at home there. 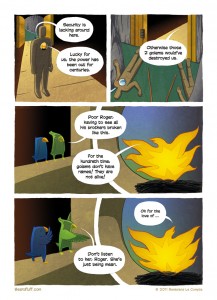 Where his early work shows its rough edges and its groping development, this new story leaps out, with strong drawing, wonderful colours and textures and a coherent story that still manages to retain some of the earlier humour. I couldn’t begin to guess where it will lead, and how much he has planned, but if keeps producing work like this, he’s got a great future. 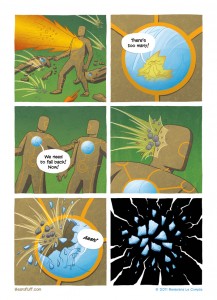