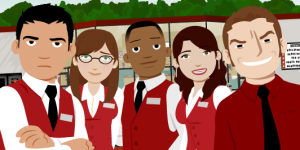 Into every persons life comes that job.  It might be your first job, it might be your last. It might be short term while you’re in school, or that first job after school. You might love it, you might hate it. But there is something special about it. Something special about your co-workers, the perks of the job, the customers, or the stuff that happens day by day. Welcome to the Multiplex 10.

Gordon McAlpin’s long running series Multiplex looks at the lives of a group of movie theater employees, their relationships, both work and private. It’s also about their customer interactions. And of course, it’s about movies. 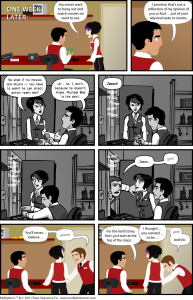 The characters love movies, but not always the same ones. Kurt loves a good summer blockbuster, while Jason would rather go to Cannes. And the stories are set largely in real time, so the movies being shown and commented on are ones in theaters as you read. Gordon even has a Deleted Scenes blog where he posts trailers for upcoming real world movies, almost like you’ve sat down in the theater and are awaiting the feature presentation. And the most recent storyline has the staff actually making their own film.

Now of course, when you have people working in close proximity over a long period of time there are bounds to be friendships and animosity. Characters have had romantic involvements, breakups, fights, laughs and tears. And while poking fun and jobs and movies would be enough to make a fun comic, it’s these interpersonal relationships that make the reader care about the staff of the Multiplex. You route for them, share in their ups and downs and get wrapped up in their lives. Even the regular customers become a part of the ensemble cast.

But in the end, a jobs a job, and that’s the other beauty of Multiplex. If you can’t relate to the movies, or you somehow don’t mesh with the characters, then there is the universal experience of having to deal with customers, co-workers and management. But unlike Dilbert say, Multiplex treats the work environment more naturalistic. Anyone who’s had to work in retail or service will find moments that are painfully familiar. 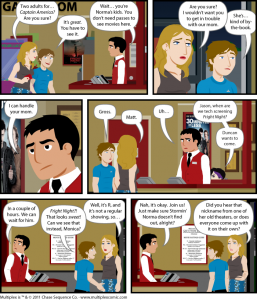 And then there is Gordon’s art. Vector based, the Multiplex and it’s denizens are done like cutouts, flat colours and early on, limited angles. But as is often the case with developing comics, Gordon’s art has improved, and while he has maintained the flat cutout approach, the characters now feel well rounded. The scenery has similarly improved, and in later years Gordon has done some stunning set pieces. And then comes the groups film and Gordon has decided to show the difference between what’s being put on film and the regular comic by hand drawing the film scenes. This provides an easy to follow delineation between the two and shows that Gordon can draw as well with a pencil as with a mouse. 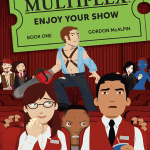 At over 600 strips, there’s a wealth of story to dive into. You can read it all on his site, or he has eBook PDFs for sale. There is also a physical book of the first 100 or so strips, (Gordon kindly provided me with a copy) along with an original prequel story and other bonus material.

So visit the concession stand, turn off your cell phone and make sure you’ve visited the washroom, cause it’s time to go to the movies.

After you absorb all of Multiplex, consider checking out these other comics. Theater Hopper takes a different slant on poking fun at movies, Short Packed looks at mundane jobs and the people that do them in a toy store, and The Non-Adventures of Wonderella is another comic featuring vector based cutout artwork.