Don Ahe has created something truly charming. Road Apples Almanac is like a trip to the past. Visually striking chords of Herriman’s Krazy Kat, feeling like something out of a time when comic strips were a selling feature for newspapers, it yet somehow doesn’t feel dated or stodgy. Maybe it’s the surfer lions. Or the candy machine in the pasture. The talking trees are a mystery.

Aldous is a farmer. We’re just starting to learn the extent of his former life, but now he leaves a mostly peaceful life with Shep the dog, (Shark Dog?) and Doc, the rooster who plots to kill him. There’s also a pair of sheep who take great pleasure in poo flinging. The strip varies in length and composition, sometimes a three or four panel strip, other times multitiered. There are some one-off gags, but by and large it’s ambling stories like the aforementioned poo flinging or the current story of Aldous’ early years. And there’s the Switch, the story from 5 years earlier when they were the superheroes Dark Ink and Shark Dog. Yeah. 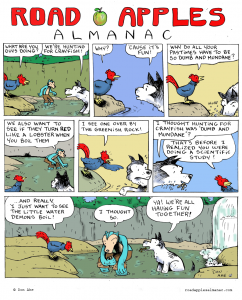 The humour is light, although at times sarcastic or wry. There’s a certain contemplative or philosophical tone at times, like the more thoughtful of Calvin and Hobbes strips. Don is aware of his influences, making nods to not only Herriman, but also Windsor McCay and perhaps Escher. The strip is primarily black and white, but he intersperses colour now and then.

Don’s art itself is confident. It’s not slick by any means, but it has a rough edge of somebody who doesn’t second guess each mark. And at times, those scratchy little lines, or the watery colours are truly beautiful.

I had the pleasure of sitting next to Don at a small local con last year, and he is much like his strip. Welcoming and neighbourly with a humour that sits lightly and delivered with a deft hand. The strip is called Road Apples, but the journey is pleasant.