During Fan Expo I decided to attend the Joe Shuster Awards, a couple friends of mine were involved or being nominated. During the awards Rachel Richey (Writer of Comic Syrup and a Canadian Comic Book Historian) and Hope Nicholson (Associate Producer at Lost Heroes, Comic Socialite and the reason I know anyone in the comic book industry) came up to the stage to give an award, but before they presented a Hall of Fame Shuster they announced something amazing.

These two ladies had obtained the rights to Nelvana of the Northern Lights, and are working on getting the comics reprinted. If you don’t know why this announcement is so amazing let me fill you in… 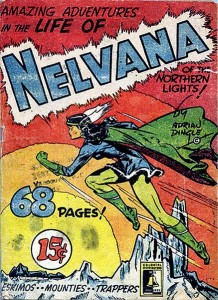 She is also one of the first superheroines, debuting before Wonder Woman. Despite the popularity of these comics in the 1940s, they are lost for later generations. The books have never been collected or reprinted since their initial publication in any way and are now essentially inaccessible. Nelvana of the Northern Lights is Canada’s first distinctly Canadian female superhero,” and Nelvana is also a Native Canadian character, which even nowadays is few and far between. For more background information, check out the Wikipedia page.

Hope and Rachel are very passionate about this project, “This is a project that has significant interest for me. Mostly I find it mindboggling that it’s been over 70 years since Nelvana was created and no one has attempted to reprint her yet. This is Canada’s first superheroine,” says Hope, “This is a passion project, it’s ambitious but I want at least every comic book reader in Canada to know about Nelvana. Hell, I want her to have a Heritage Minute! And yes, I’m vain enough to think that me and Rachel can do this. Because we love Nelvana, and we want everyone to love her too.”

There will be a crowdfunding launch on October 1st, in the meantime be sure to check out their Facebook page and Twitter. These ladies have some amazing artists lined up for Kickstarter Campaign Incentives and who will be contributing to the reprinting of the book. Artists like, Jeff Lemire, Michael Walsh, Adam Gorham, Francis Manapul, Ramon Perez and more!

This is a very exciting project! It is something for both comic book lovers, and Canadian buffs alike. Make sure you check out their fundraising campaigns and give what you can. Canadian Comic History is being reborn, and you can be a part of it!