This weekend my husband and I were lucky enough to go to New York Comic Con. We flew to New York on Friday morning, checked into my hotel and went right to the con.

When we got there, the scene was overwhelming; there were so many con goers, at first the entrance was hard to find. Instead of large posted signs, they had volunteers holding signs on sticks directing fans. This was good if you needed to ask a volunteer a question, bad if you were at the back of a crowd or line up to get in and you didn’t need to be.

Once inside we went straight to a Terry Pratchett signing.

He is not in the normal con circuit and we were lucky that he was appearing at this con, especially because he has early onset Alzheimer’s. We waited in line for about two hours and were lucky enough to be three people away from where they cut off the end of the line. Better still, we made friends with the people standing behind us, who also happened to be Torontoians!

Terry wasn’t signing any books, but instead they were handing out book plates (which seemed to be very popular to give out at this con).

He then allowed each fan to sit in a chair beside him and take a picture and he would ask their name and say something rather peculiar. I heard other fans talking and he told them they “have a nice shaped head” or that they “are a rather large man.” I asked him if he was going blind from two hours of camera flashes and he said, “something like that” and made a face at me. He was very sweet, and very British. I was so happy to have met him.

The next day we wanted to check out the con floor. My only goal was to get two comics signed by Brian K. Vaughan. I really love his stuff, especially Y: The Last Man and his new comic Saga. When we arrived at the con, I headed straight for the Image booth (where he would be signing) sadly they told me they had given out all of the tickets for the signing. This frustrated me because the schedule and information that NYCC was giving out only had the signing times; no mention of tickets. Some signings had tickets while some did not and we had no idea where or when tickets were being given out for the signings. I obviously looked distraught, because the image booth employee told me that Brian is a really nice guy and is very generous with his time, so if I came back near the end of the signing and hung around, he would probably squeeze me in. So, around 2:00 I headed back to the image booth. His wrangler told me that I couldn’t get my stuff signed without a ticket. I was frustrated and upset; the information from one Image person was different from another, no one could give me a straight answer! As I stood near the signing desk bitching about it, I realized that the wrangler was walking away. Brian was signing the last person’s comics (which was a stack of about 50 Saga #1 Issues) so she didn’t need to be there anymore. Amazingly, Brian noticed me standing nearby with two comics in my hand and asked if I would like to jump in! I was super excited and he signed my Saga #1 (and so did the artist Fiona Staples) and my Y: The Last Man issue #16 (my favourite cover).

Brian and I chatted a little as he continued to sign the large stack of comics from the previous person and I couldn’t have been happier.

So far, my con had gone well. I only had one more thing I wanted to do: see the Firefly 10 year anniversary panel (yes, I am a bit of a Brown Coat). I know how crazy Firefly fans can be, so I was aware that I might have to wait in line for a couple of hours. Not knowing when I should line up I looked to Twitter for the answer. The panel was taking place at the largest theatre, sadly I learned that they were not emptying the theatre after each panel, so around 3 hours before the panel the theatre was already packed to the brim (I hear they do this at San Diego comic con as well). This I feel is unfair for those trying to see other panels and those who are not “in the know.” If I did not have access to wi-fi or Twitter I would have gone 3 hours early to the panel, waited and wouldn’t have been able to get in. This lack of information from the con was frustrating and continuous. Oh, did I mention they ran out of schedules and maps on the Friday?! Leaving those without access to the con app and internet clueless and uninformed.

Really I shouldn’t bitch. I did have a great time, but sadly I probably won’t attend again. It was very much like Fan Expo and I don’t have to go through customs for that!

After leaving the con Saturday, knowing we couldn’t get into the Firefly panel, we decided to keep the nerdiness going and got tickets for Spider-man Turn Off the Dark on Broadway.

We lined up in Time Square to get discounted tickets and were lucky enough to get the play we wanted. I believe this is a must if going to see a Broadway play. Why pay full price when you don’t have too!
I will be posting a review of the play so be sure to keep an eye out for it!

On Sunday we took the time to sight see and shop. We also ran into the Hispanic parade which  was a lot of fun! 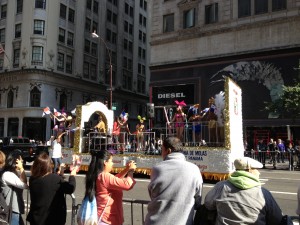 Although we had a three day pass, we didn’t feel the need to go back to the con.

Overall NYCC was pretty good. It had a lot of cosplayers, which always makes walking the con floor entertaining! The aisles were nice and big and the booths spacious. The con goers were friendly and there was a lot of interesting stuff to see. The con was pretty well organized, but needed to have a better method of providing information to the guests.

If you love Fan Expo, this con is very similar and you will probably like it. I would only suggest going if there is a guest you really want to see, because it is a short trip over the border. If you have never been to New York City, make sure you sight see outside of con hours – it really is a beautiful city!