The first issue of Siege has come out and it’s not too bad. The fact that it’s only four issues means that this could be the most compressed storytelling that writer Brian Michael Bendis has ever given us.

Bendis is a tremendous writer; he specializes in portraying intimate moments between superheroes, but tends to drop the ball when it comes to big events. (Secret Invasion seemed to lose all momentum in it’s last two issues, and ended up being nothing more than a lead in to it’s next big event Dark Reign—in which Siege is the climax for.)

The breakout character in Dark Reign has definitely been Norman Osborn. It’s been so long that we’ve had Heroes fighting against Heroes and all the shades of gray that comes with that, that we’ve almost completely forgotten just how wonderful it can be have an actual villain be the ‘bad guy.’ With Norman Osborn everything is black and white. He’s evil through and through. So what are some of the worst things that Norman Osborn has ever done? Read along friends.

Jeph Loeb and Tim Sale bring us this melancholy look back at the classic Spidey-era, a time when Mary Jane was just introduced, Peter was just about to hook up with Gwen and Spider-Man seemed to be battling just about every animal themed villain in the phonebook. You see at this point Osborn—after finding out Spider-Man’s identity– had a climatic battle with him, the outcome of which had left him Osborn an amnesiac regarding his past few years and his criminal alter-ego. But his sins were revisited when Kraven decided to fufill his contract with the Goblin by sending a gauntlet of bag guys after Spidey, and then attacking him at his weakest. Unfortunately he was under the impression that Harry Osborn was actually the web slinger and almost killed him. This was one of the keys that started to awaken the goblin inside him and that led to… 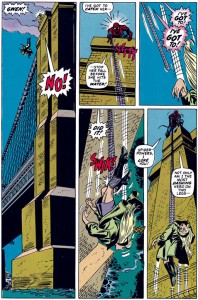 The night Gwen Stacy died was the moment that comic books grew up. It may not be a big deal now, but Gwen Stacy was Spider-Man’s long term girlfriend at the time. The fact that she was killed due to the machinations of the Green Goblin solidified him as Spider-Man’s greatest nemesis. Writers have revisited the storyline a few times—recently in Sins Past—revealing that Osborn had been carrying on an affair with Gwen, but that seems to be swept under the rug. Which is good, ’cause that was gross. 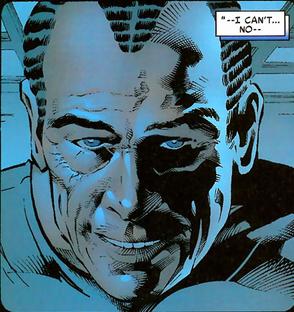 Written by Warren Ellis and drawn by Dark Avengers’ Mike Deodato, Tbolts focused on the aftermath of Civil War and the beginnings of Norman Osborn’s rise to power. Ellis changed the dynamic of the group—having the Thunderbolts now be a Dirty Dozen-style group of ex-cons who are press ganged into government service with the promise of a pardon and release for full cooperation. Ellis’ take on Osborn is the real star here as he portrays him as a man driven by his own greed and by his own personal demons. If you’re wondering where the Dark Reign portrayal of Osborn started you need look no further.

From behind bars, Osborn once again masterminded a plan against Spider-Man. This time he had Mac Gargan, also known as the Scorpion, kidnap Peter’s Aunt May. The plan was for Spider-Man to break Osborn out of prison in exchange for his Aunt’s life. only to have twelve of his greatest enemies waiting for him on the outside. Osborn had assembled a Sinister Twelve, which included Mac Gargan newly bonded with the Venom symbiote. While that all goes to pot (Mark Millar wrote this story, and I don’t want to ruin it for everyone by telling them what happens, exactly) I will tell you how it ends—as it’s the most chilling Osborn moment, I’ve read: At the end of it all, he sends Peter a letter in which he thanks him: for you see, if it wasn’t for Spider-Man, his life would have no purpose or direction. 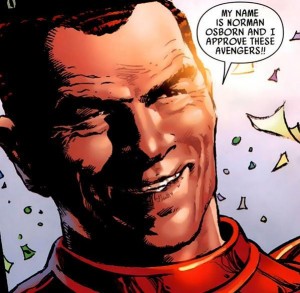 Not only does he steal Tony Stark’s position as head of SHIELD (and renames it HAMMER) He then steals his armors, his technology and bankrupts his company, and then he accuses him of high treason. (He also steals the Avengers.. but that’s another post all together.) Things get so bad that Tony Stark has to delete his brain to stop Osborn from getting the information he needs.

And the worst thing Osborn’s ever done:

HE BROKE UP STAN LEE AND STEVE DITKO! 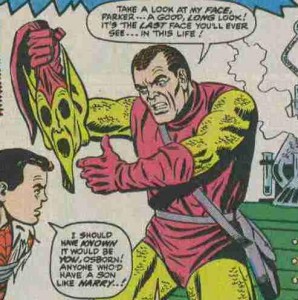 When the discussion broke out over who should be revealed to be the Green Goblin, Lee and Ditko disagreed on who he should be. According to one theory, Lee always wanted him to be someone Peter Parker knew, while Ditko wanted him to be a stranger, feeling this was closer to real life. Apparently this was the final straw between Lee and Ditko, and Ditko left the series and cut most of his ties with Lee. So there you have it, right from the start, Osborn was destroying lives and friendships!