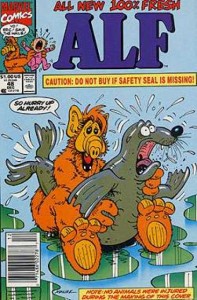 Back in the late 1980’s a television show debuted about a wise cracking alien who comes to Earth and inevitably befriends a family (mainly a younger boy; Brian). The television show was called ALF, which was actually an acronym for Alien Life Form. The family called the alien ALF even though his actual name was Gordon Shumway. The success of the show spawned toys, books, even a separate cartoon. Marvel Comics was no stranger to using licensed material at the time with such successes in the past as Star Wars, Barbie, and many more to mention here. And thus they created an Alf comic book.

So let’s just get this out there….

I’m not really sure if much needs to be said about this cover. Most of the reactions from anyone who sees this comic is: “What the heck’s Alf doin’ to that seal?!” Well, really, no one is too sure. However what IS known is that the cover is meant to be a joke about the seal of approval. From 1954 to just a scant few years ago, the Comics Code Authority was required to have the Seal of Approval on every comic book. So, this is a play on words because Alf is preventing the seal from escaping so that the “Seal of Approval” stays on the cover. Now, what’s genuinely frightening about this cover is the expression on the poor seal’s face! I would say that Alf is doing a great job of restraining the seal.