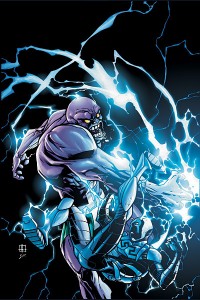 On his Twitter feed, Geoff Johns just announced there are many plans in store for Jamie Reyes, the current Blue Beetle. Jaime will be appearing in “most of” the episodes of Batman: The Brave and the Bold this coming season, and even more exciting, there is a live action series in development.

Geoff reports that they have test footage of a transformation sequence that he describes as “awesome”. He promises to try and get it shown at this year’s CCI in San Diego.

The latest Blue Beetle comic lasted 36 issues, and was cancelled just as Jaime made his first appearance in Brave and the Bold. Considering Jaime has already become a popular character with viewers of the B:tB&tB series, there’s little surprise that there are plans to get him more exposure. Hopefully this will get him enough attention to get another chance at a series, as not only was it one of the best things to come out of Infinite Crisis – he also had one of the best supporting cast of comics this side of Spider-Man.