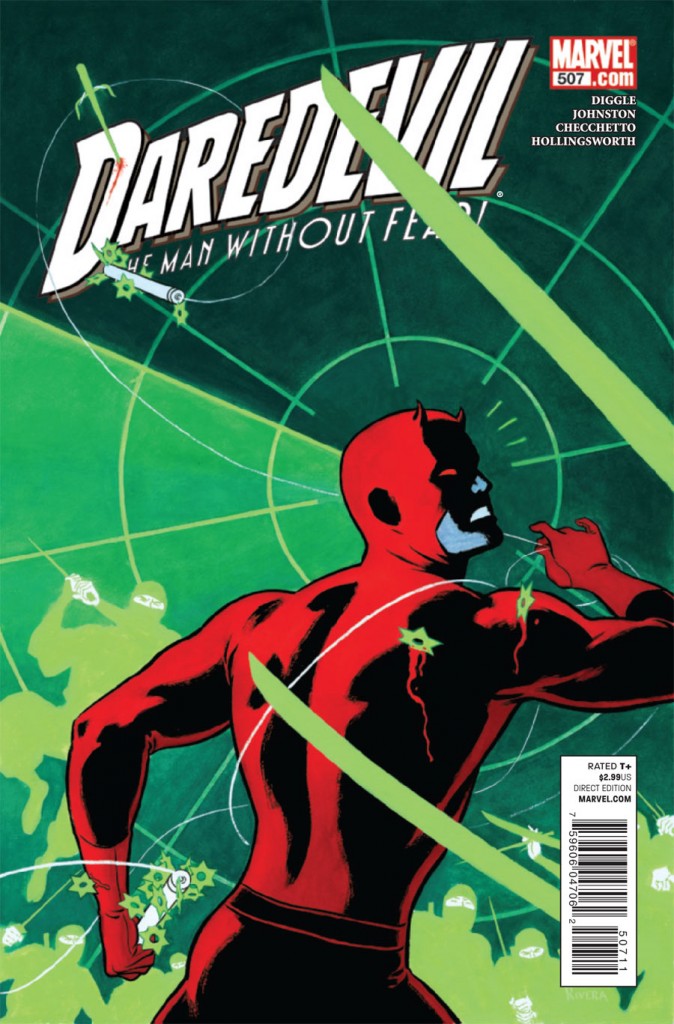 With Marvel’s summer event Shadowland drawing near, the Daredevil team is gearing up for the event that will pit Matt Murdock dead at the centre of a conflict with Marvel’s street-level heroes; everyone from Luke Cage and Iron Fist, to Frank Castle and Moon Knight. This week we’re looking at the final issue of Diggle’s run before his Shadowland mini-series kicks into high gear next month.

Spiraling out of the events of Ed Brubaker’s run on Daredevil which saw Matt Murdock join his sworn nemeses The Hand, Andy Diggle positions Daredevil centre among a den of assassins as their leader, possibly taking him down a darker path unlike any writer before him. The blind (disbarred) lawyer from Hell’s Kitchen who also happens to moonlight as the costumed vigilante Daredevil joined the league of ninja assassins as their leader at the end of Brubaker’s run. Since it began, Diggle ‘s follow-up run has focused on Murdock’s hope to change The Hand’s operations from the inside, despite falling further into their lion’s den. Even more, considering its international reach and along with his close confidants White Tiger and Black Tarantula, they look to expand their operation even further to ensure something like Norman Osborn’s Dark Reign never happens again. We’re left to wonder though whether he can, and whether in his efforts he’ll be corrupted by the order’s practices beyond repair, or persevere in spite of them. Yet the question is, what does The Hand have in store for the man without fear? Amidst discontent with his leadership from one of the Hand’s Daimyos, betrayal, and a visit from an old flame, Daredevil’s trek deep into his personal abyss aims to bring him to his greatest heights as a Marvel character, while putting him at odds with those who think Murdock may have finally gone over the edge. 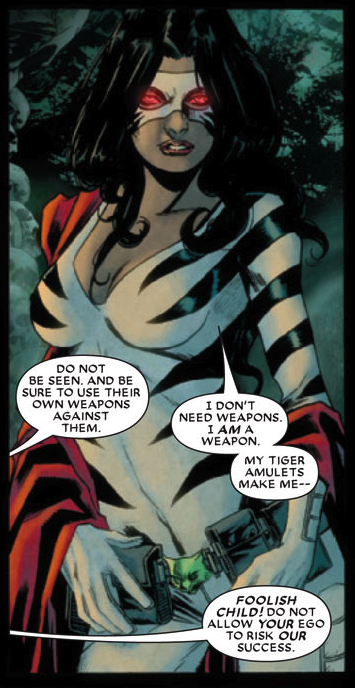 In the final issue before Shadowland, Daredevil #507 opens with Murdock being attacked by Bakuto’s personal assassins while still in Japan for The Hand’s Daimyo summit. Bakuto is the skeptical South American Daimyo of The Hand who’s unsure of the order’s choice of a new leader. Even as Murdock fights for his life, The Hand’s inner circle plots his downfall along with one of his confidants who was revealed to be a Hand sleeper agent in the previous issue. Soon after, a plot hatches to remove Bakuto from his position permanently. The plot is covered up to pull Murdock’s strings, while testing his resolve to lead the Hand and pull him further into their web. Successful in their plot, a new Daimyo for South America is chosen by Murdock, although it’s not someone the Hand or their sleeper would have expected. The story for the most part sets up the final pieces of the Shadowland puzzle and puts them into place. Daredevil, now fully sure of his intentions, leaves Japan for New York where showdowns with the city’s grittiest heroes await. Continuing the theme of questions this book poses, you have to wonder whether Murdock is blindly falling into the Hand’s plans, or considering his choice in Daimyo, are they falling into his?

Chechetto and Hollingsworth continue the long standing tradition of fantastic, gritty artwork on Daredevil. As far as back as the Bendis-Maleev run, the art has always used darker tones to capture both the environment Daredevil lives in, while mirroring the darkness of his own psychology. The opening pages of issue #507 open with Daredevil perched on a building amidst a snow and lightening storm in the wee hours of the night. I really liked how the crackling lightening was used to illuminate the upper part of Daredevil’s costume in contrast to the darker parts of his costume away from the light. Perhaps one of the coolest effects used here, as well as throughout the entire book is the snow effect. The way it’s drawn and painted, the snow is painted into the foreground, with Murdock sitting in the background, creating a much fuller, realistic environment. The same effect is used in several sections as I mentioned, such as the battle with Bakuto’s assassins on the rooftops throughout the issue, as well as the final pages when Daredevil and his confidant leave for New York. To complement the beauty of the snow effect, the artists capture the brutality of the Hand’s methods and the violence that defines Daredevil’s world. Whether it’s a brutal stabbing, a neck snapping twist, or a ninja disintegrating after being defeated, the art in this book is anything but bland; it’s a unique combination of the grit and violence that rests underneath the Daredevil universe, while the snow effect mirrors the façade Murdock has always put up regardless of his inner toils. It captures the serenity of his desire for solitude amidst the snowfall, which can erupt at any time as we saw in this issue. Like any good piece of art, it comments on a fragment of his life; where he is, has been, and where’s he going. 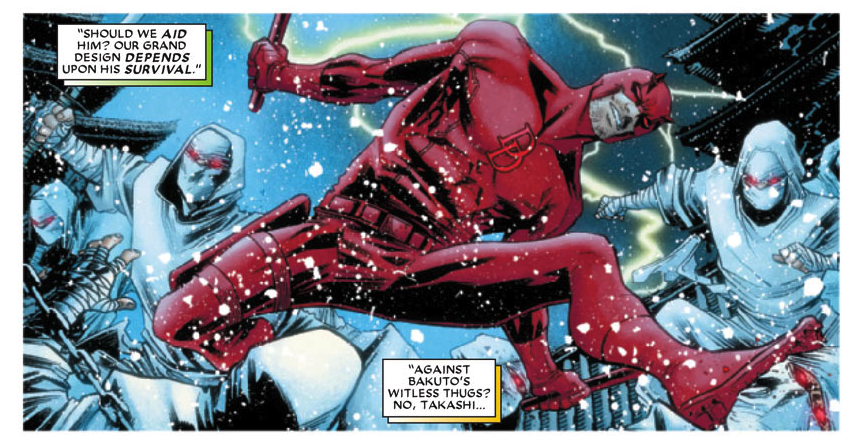 As the final issue before Shadowland, this issue sets up the event that is being billed as the battle for the soul of New York. Diggle’s run thus far has focused on Murdock performing the necessary rituals of Hand initiation, with it all leading to this point where Murdock believes himself to be in control. The question with Daredevil though has always been just how much control he has. Even more, writers have always explored how far Murdock can be pushed before he finally reaches his breaking point. That is of course assuming he’s not already there; his constant struggle to stay afloat amidst strife, yet never wavering in his resilience has been a staple of his characterization. In the last seven issues, Diggle has brought the man fearlessly deeper into the figurative and metaphorical abysses that define Murdock’s life, possibly shrouding him in even more darkness than Frank Miller’s classic (and essential) Born Again story arc. One of the more interesting wrinkles of the run thus far though, especially in this issue, is the blatant obviousness of The Hand’s intention to play Daredevil. Diggle makes it quite clear that The Hand aim to destroy Murdock. Diggle’s dialogue also alludes to the remnants of Murdock’s humanity and his undying belief in the good in the people, something which the Hand believes they are exploiting. Having positioned Murdock in a place where he thinks he can help people, you have to wonder whether Daredevil is jumping into this blindly or not. Then again, in the back pages of the book within The Devil’s Notebook letter forum, a quote from Murdock’s deceased girlfriend Karen Page is included.

“I-I know it sounds foolish-but sometimes, Matt- it feels as though you CAN see-as though you can see MORE than anyone else.”

Just maybe in an event where it appears Elektra returns to his side, where we could see the christening of Marvel’s greatest villain if we believe the teasers, and where he faces an onslaught of some a-list street level heroes, perhaps it is Matt Murdock who’s in control.