A random thought: One year later where are we with Marvelman? Nowhere! 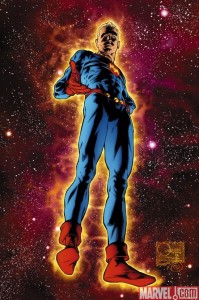 It’s been more than a year since Marvel announced that they acquired the rights to Marvelman from Mick Anglo and comic fans all around the world rejoiced that one of the most critically acclaimed runs would be released. Well, 1 year later, what do we have to show for it? A whole crapload of original Marvelman reprints from the 1950’s. Well, you may wonder what’s wrong with that? Well, what’s wrong with that is that no one gives a crap about the original 1950’s series. It’s just not that interesting at all. What everyone wanted to see reprinted was the groundbreaking run in the 1980’s by Alan Moore and later Neil Gaiman before the series was cancelled.

Looking online and through the Marvel previews guide, I still cannot find any specific mention of the release date of the Alan Moore and Gaiman material. In fact, if you read every press release by Marvel, they always specifically mention Mick Angelo’s rights, you never get direct Marvel quotes about the later stuff. Alan Moore has stated that he will share any of his profits with Mick Angelo but otherwise, nada. So yes, when Marvel made their news last year, I being the cynical jerk I am, bet that it would take forever before Marvel released anything we wanted to see, while others got their hopes up. Well…where are your hopes now! We’re a year after the announcement with no news on the horizon and all we have to show for it is a hardcover collection of old stories that are meant to be a completely unnecessary primer to Marvelman. If you know that I’ve missed any news about this, let me see because I am extremely disappointed with the lack of news about the project.